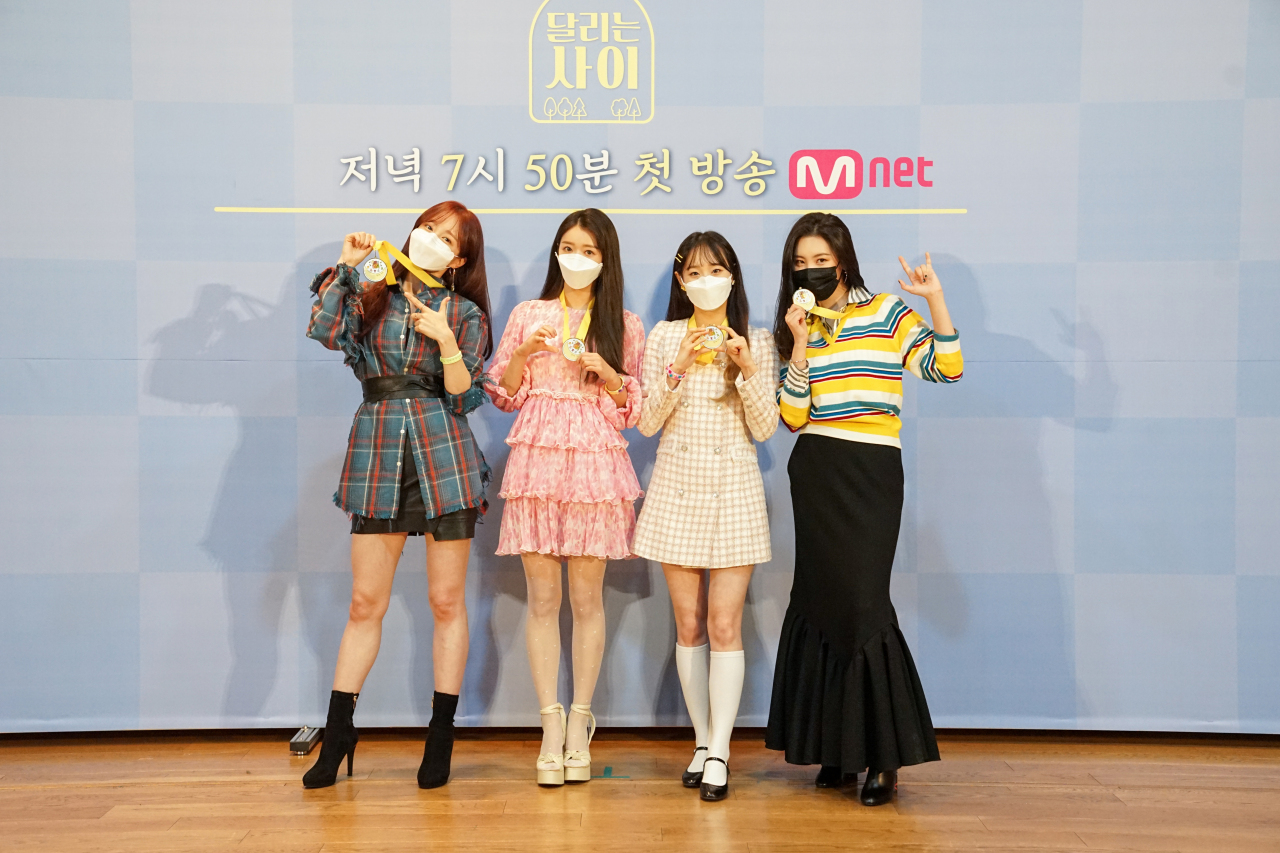 (From left) K-pop idols Hani (EXID), YooA (Oh My Girl), Chuu (Loona) and Sunmi pose before an online press conference for Mnet's “Running Girls” on Tuesday. (Mnet)
Five K-pop idols in their 20s running through scenic courses around the country is the theme of Mnet’s “Running Girls,” whose first episode airs Wednesday.

Sunmi, Chungha, Hani of EXID, YooA of Oh My Girl and Chuu of Loona run together as a crew in a show that is as much about bonding as it is about introducing viewers to running courses.

“The program is about K-pop girl idols forming a running crew and running together in a place without people and sharing their hearts. Instead of simply focusing on running, we focused on getting close while running,” said producer Park So-jung. “Running is like our lives with its ups and downs. We wanted to make people look back on things and get healing from the program. I hope running becomes a medium to look back on our lives.”

The highlight video played during the press conference showed the idols running together alongside rivers, mountains and reservoirs across the country, as well as cooking together and bonding emotionally. Part of an industry where each star has to sprint as hard as she can without ever taking a break, the five singers were able to slow down and empathize with each other.

“We talked a lot about how our stories, passion and difficulties would be shown. I’m very curious as well. I hope you pay attention to our individual stories,” said YooA.

“I cried a lot with the other members. There were many tearful moments. You can also enjoy many tourist spots,” said Chuu on the key points to watch out for in the show.

The highlight video that showed the members neither wearing masks nor keeping their distance with each other while running raised concerns about virus spread. Many running crews have been requiring the wearing of masks and keeping a safe distance while running as precautionary measures against the spread of COVID-19 since February.

“When we filmed, we restricted the area where we were filming so it was just the members. Also, our last shooting ended on Nov. 18, and the social distancing level was at Level 1 back then,” an Mnet official told The Korea Herald.

“Running Girls” airs on Mnet channel on Wednesdays starting this week at 7:50 p.m.