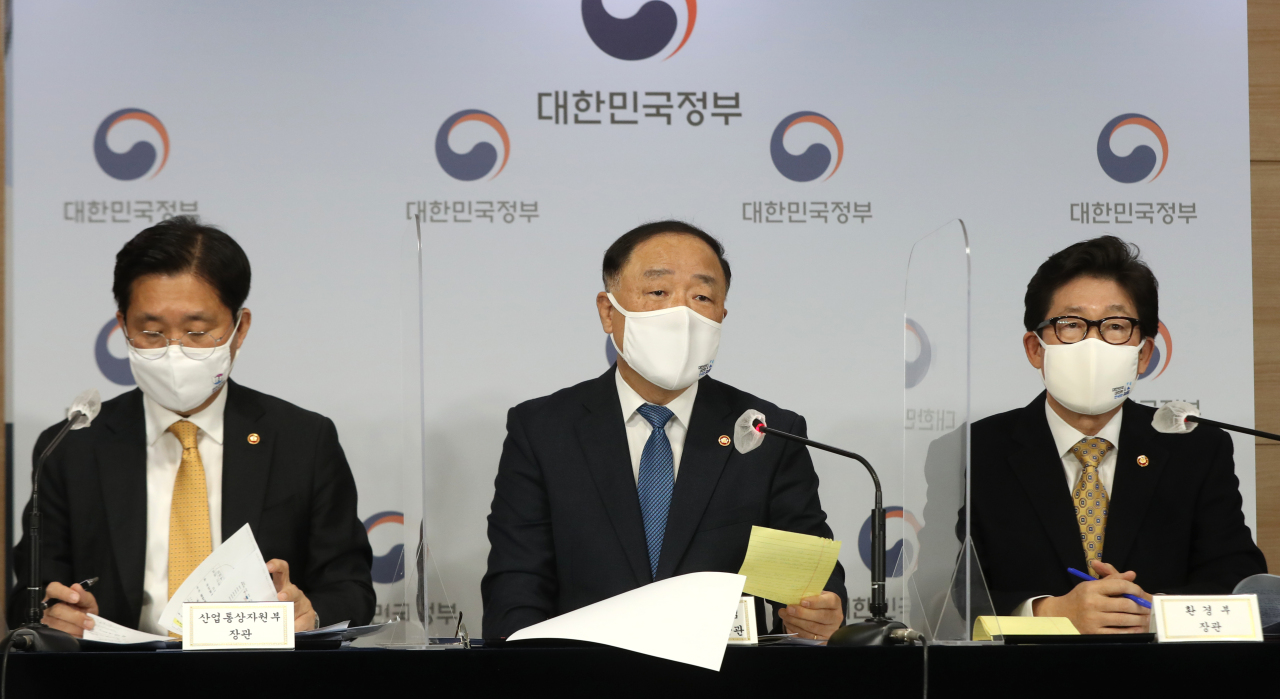 When it comes to the introduction of new carbon tax rules here, however, immediate action would still be premature, officials said.

“As can be seen in US President-elect Joe Biden’s vow for carbon neutrality, the paradigm shift into a sustainable economy is an unavoidable global trend,” Deputy Prime Minister and Finance Minister Hong Nam-ki said in a press briefing held at Seoul Government Complex, following a related economic policy meeting.

Calling for drastic, preemptive responses to such change, the government said that it will figure out a road map to move closer to carbon neutrality, while boosting economic growth and improving people’s lives at the same time.

In light of the aggravating COVID-19 pandemic and the consequent economic fallout, Hong underlined that such energy paradigm-shifting measures should be carried out in a way to minimize pressure upon society and the market.

But when asked if the government is seeking to introduce carbon-related taxes here, Hong only said it is “not appropriate at this stage” to go into details of such a taxation scheme.

“Today’s announcement was to share the overall strategy and direction (of energy policies),” he said.

The fiscal chief’s latest remark came as a follow-up measure to President Moon Jae-in’s announcement in October that the country will strive for carbon neutrality by 2050.

Carbon neutrality -- the idea of achieving net-zero carbon dioxide emissions either by balancing emissions with removal or eliminating emissions altogether -- has risen as a priority agenda in global society since the Paris Agreement took effect in 2016, and even more amid the ongoing pandemic crisis.

Adding fuel to Korea’s green aspiration is the growing concerns over a lukewarm response to climate change and its impact on the country’s highly trade-dependent economy.

One of the key factors is the carbon border tax, an idea likely to be adopted by the European Union, to reflect the amount of carbon emissions attributed to imported goods in tax assessments. The introduction of such enhanced tax rules will mostly take a toll upon petrochemicals, steel and other conservative manufacturing sectors.

While holding an upper hand in digital and green technologies, Asia’s fourth-largest economy is also vulnerable in other high-carbon-emissions industries, due to its reliance on manufacturing and industrial goods exports.

Despite repeated vows for clean energy, coal still accounted for more than 40 percent of the nation’s total energy production as of end-2019, according to government data.

Leading related discussions henceforth will be an incoming presidential committee in charge of carbon neutrality agendas. Also, the Ministry of Trade, Industry and Energy is working on adding a new deputy minister post that will exclusively deal with energy issues and supervise future mobility policies.

In order to initiate a new climate response fund, authorities will start working on classifying and merging other funds and organizations with similar functions, starting next year.

These series of action plans will be reflected in the final energy road map, to be submitted to the United Nations by year-end, according to officials.