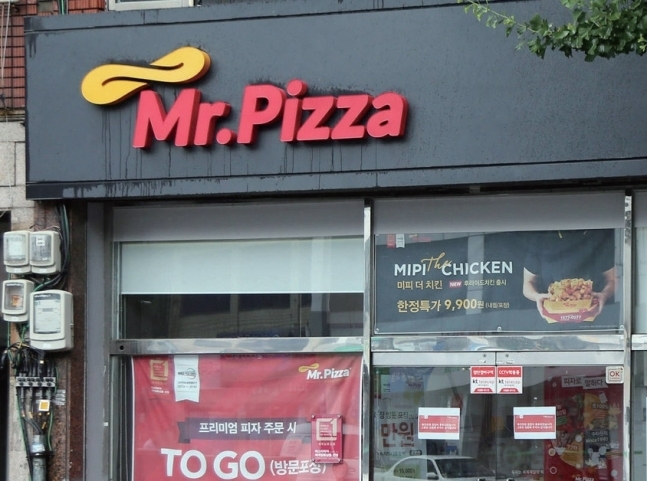 An exterior view of a Mr. Pizza restaurant (Yonhap)
Shares of MP Group, the South Korean company that controls pizza restaurant franchise Mr. Pizza and coffee chain Manoffin, plunged over 21 percent at the close, after it resumed trading on the nation’s secondary bourse after some three years and four months.

The group’s founder and former Chairman Jung Woo-hyun was accused in 2017 of breach of trust and of embezzling some 15 billion won. The case is awaiting a Supreme Court ruling after lower courts returned guilty verdicts.

Authorities had reviewed delisting MP Group shares by the end of 2018, but postponed their decision as Jung and his family pledged to leave management.

Control of the group passed on to a local private equity fund jointly run by Korean investment houses Ulmus Investment and TR Investment, as they bought the controlling shares from the ownership family for 20 billion won in September.

Vowing to rise as the top pizza restaurant franchise, the firm has secured a total of 25 billion won recently by issuing new shares, as well as selling treasury stocks.

“Due to the prolonged trading suspension, our shareholders must have been devastated. Through massive amounts of investments and effective company restructuring, we’ll put great effort to mark a turnaround and maximize shareholder value,” the new CEO said in a statement.

Meanwhile, MP Group has recorded operating losses for five consecutive years since 2015. Its sales fell by 28.8 percent on-year to 59.9 billion won in the January-November period this year, while its net loss came to 11.5 billion won, rising over fourfold in the cited period.