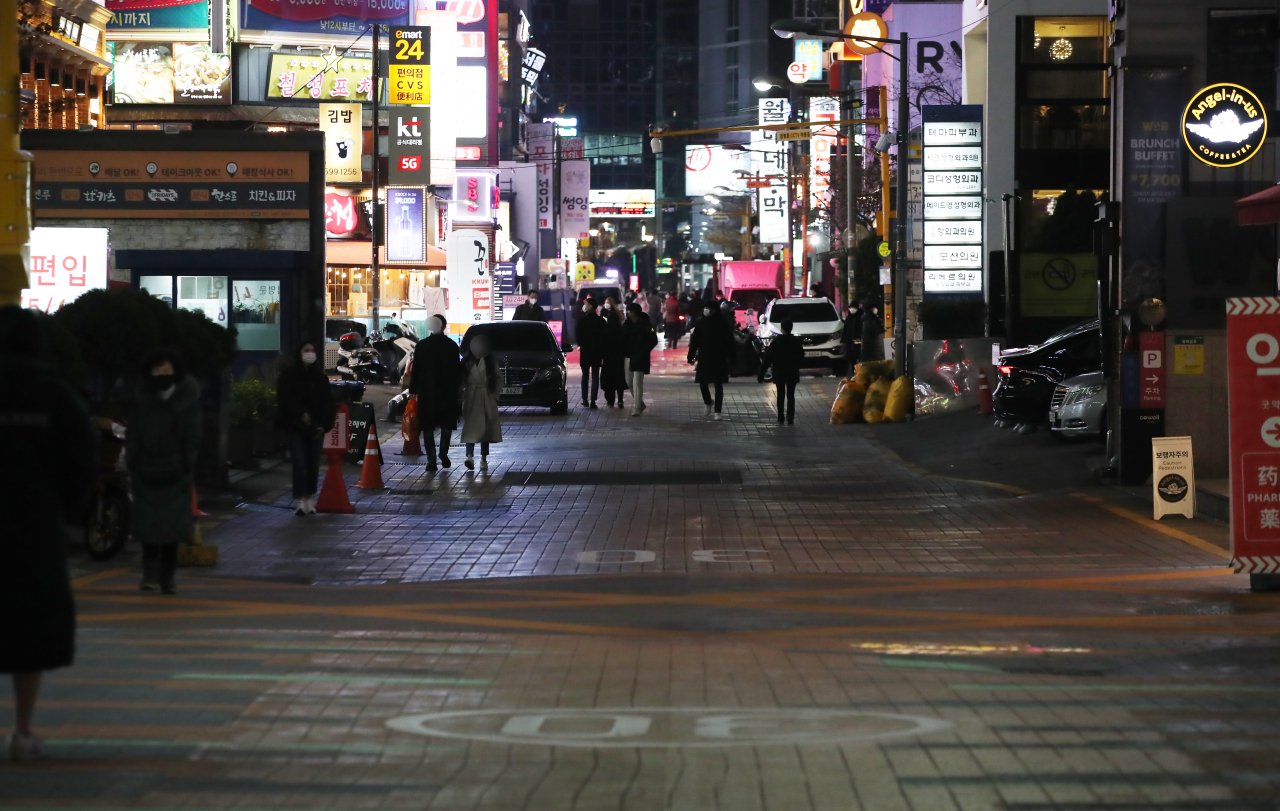 A street in Gangnam, one of the busiest districts in Seoul, is mostly empty on Thursday, as South Korea has implemented strict antivirus measures to stop the spread of the new coronavirus. (Yonhap)
Tougher antivirus restrictions will take effect in Seoul starting Saturday, with a record number of new daily COVID-19 cases reported in the capital and the country’s daily case count surpassing 600 on Friday.

The spike in coronavirus cases is also fueling fears of the health system becoming overwhelmed, causing shortages of hospital beds and other resources for critically ill patients. At this pace, according to health officials, hospital beds can be expected to run out in 10 to 14 days.

In Seoul, the country’s capital and home to some 9 million people, the number of daily coronavirus cases hit a record high of 295 on Friday. Some 53 of the 61 beds available in the city are already in use.

Health authorities are struggling to reverse the upward trend despite the more restrictive social distancing measures in place.

The steady upward trend in daily COVID-19 cases will not “be easily reversed” because infections run rampant in everyday spaces and are not confined to certain groups or locations, according to Yoon Tae-ho, a senior official from the Ministry of Health and Welfare.

The daily case numbers stayed in the 400-500 range for eight days straight before surpassing the 600 mark on Friday. For the past week, the daily average number of new COVID-19 cases was 503.1.

Health officials are mulling whether to tighten the current Level 2 social distancing measures in the Seoul metropolitan area, which are to be in place until next Monday. The decision is expected to be announced this weekend. The authorities consider imposing Level 2.5 rules, the second-strictest in the country’s five-tier social distancing scheme, when about 400 to 500 cases are reported daily for a full week.

Across the nation, only 59 hospital beds were available for critically ill patients as of Friday, with health officials saying the beds would run out in about 10 to 14 days at this pace. For patients whose conditions are not critical and who have no symptoms or only mild symptoms, some 37.5 percent and 32.1 percent of beds are ready for use, respectively.

New clusters of infections are being reported from a variety of places ranging from workplaces, social clubs, schools and restaurants to hospitals and nursing homes, making it harder for the authorities to trace contacts.

As of Friday, the transmission routes were unknown for 15.8 percent of the cases reported for the past two weeks.

Of Friday’s locally transmitted cases, the majority were in Greater Seoul -- 291 in Seoul, 155 in Gyeonggi Province, which surrounds the capital, and 17 in Incheon. Outside the Seoul metropolitan area, cases were registered in all cities and provinces.

Of the 29 imported cases reported Friday, 18 were detected at the border, while the other 11 were identified in individuals under mandatory self-quarantine in Korea. Eighteen cases were from elsewhere in Asia, nine were from the Americas and two came from Europe.

The number of COVID-19 patients in serious or critical condition here stood at 116.

Seven more people died from the virus, bringing the death toll to 536, with the overall fatality rate at 1.48 percent.

So far, of the 36,332 people confirmed to have contracted the new coronavirus here, 28,611 have been released from quarantine upon making full recoveries, up 259 from a day earlier. Some 4,853 people are receiving medical treatment while under quarantine.