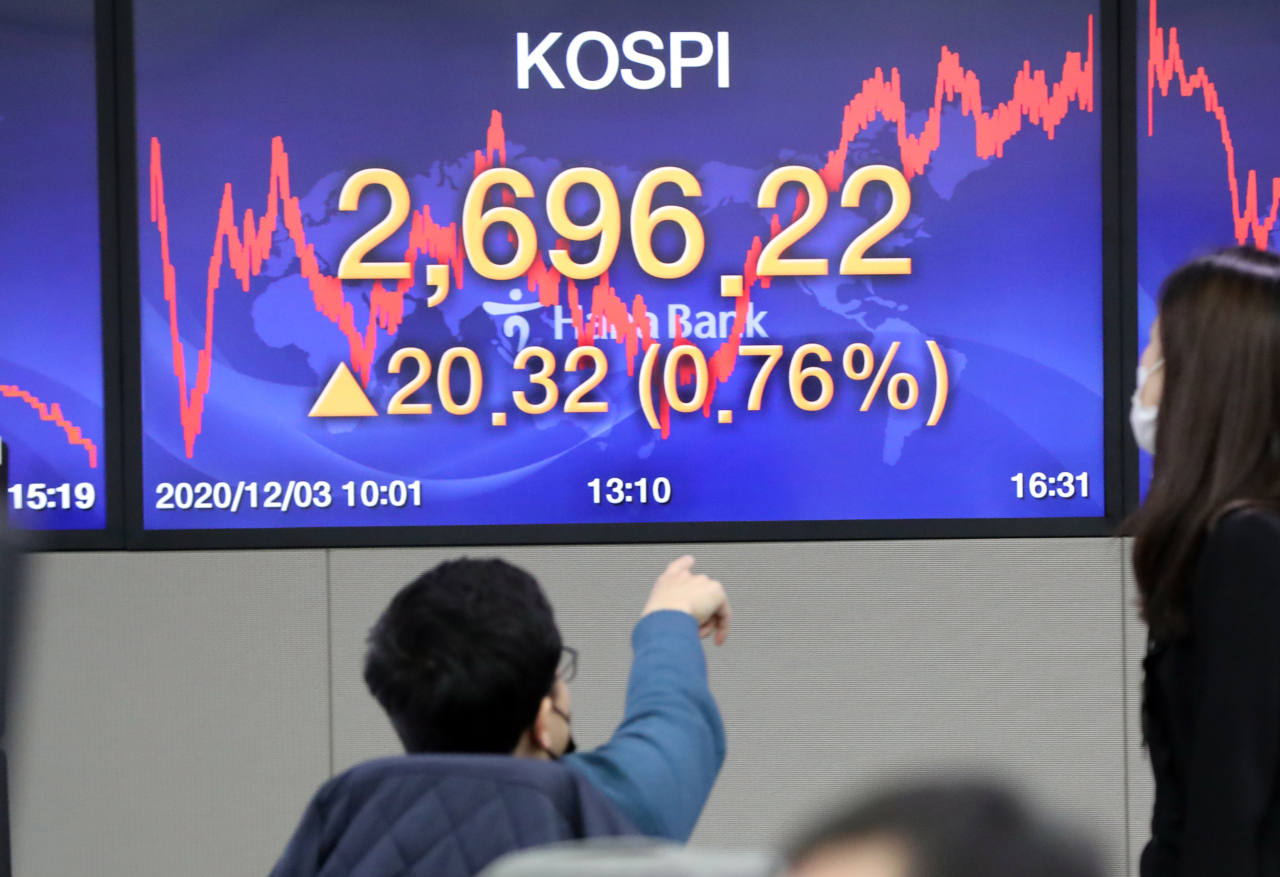 An electronic board at Hana Bank’s dealing room in Seoul shows Kospi closed at its all-time high of 2,696.22 on Thursday. (Yonhap)
South Korea’s main bourse Kospi continued its bullish run on Thursday with shares of market bellwether Samsung Electronics touching the 70,000-won mark during the intraday trading.

Market bellwether Samsung Electronics soared up to as high as 70,500 won ($64.23), setting a record-high price in the early morning trade. It was the first time for the chipmaker to cross the 70,000-won mark. But as institutional investors offloaded their shares, worth 186.3 billion won, it lost some of its earlier gains to close at 69.700 won.

Along with the world’s No.1 chipmaker, its hometown rival SK hynix also logged its 52-week high of 114,500 won during trading, but fell to 111,500 won at the closing. Some large-cap stocks, including LG Chem, Samsung Biologics, Celltrion and Naver. Hyundai Motor and its sister firm Kia Motors soared more than 6 percent.

On the back of foreigners’ buying, Kospi surged 14.3 percent in November. The amount of offshore investors’ net purchase, however, is likely to reduce in December, a brokerage report showed.

Yuanta Securities Korea’s analyst Cho Byung-hyun wrote in a report that the monthly climbing rate of Kospi last month logged the third largest since 2000. It was followed by the records seen in January and November in the year with 22.45 percent and 19.72 percent, when the IT bubble bust.

“Recently foreigners’ movement in the Korean stock market went in the complete opposite direction from the Volatility Index (VIX). Their lack of fear of market instability is somewhat positive, but it also explains that foreigners’ buying momentum has burned out,” the analyst added, while stressing the amount of their net purchases tended to grow smaller as it gets closer to the end of the year.

Despite foreigners’ burden, the expert saw major firm’s better-than-expected quarterly performance results in the third quarter and hopes on economic recovery next year are likely to remain as the positive fundamentals to the local market.

“A possibly reduced buying demand may slow down a rise in the index, however, macroeconomic indicators such as the Citi Economic Surprise Index have been improved. The upturn outlook of Korean listed-firms has also been accelerated.”