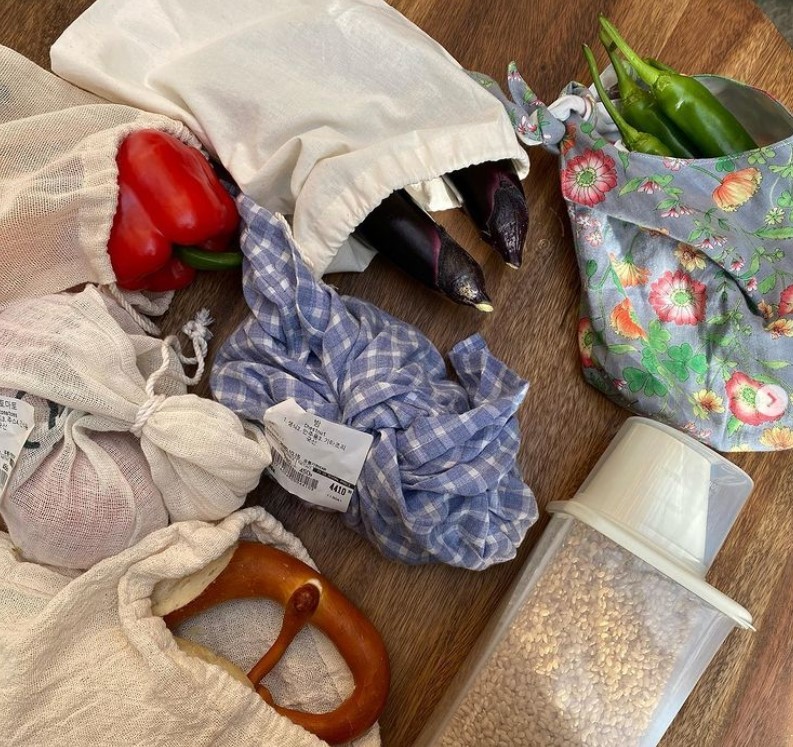 A participant in Your Bottle Week took this photo after going grocery shopping with reusable bags. People can download the Zero Club app and collect points when they use zero-waste stores. (Your Bottle Week)
With the pandemic raging on for nearly a year, people are using more online delivery services for foods and daily necessities while staying at home.

Although the new normal has brought a lot of convenience, more people have begun to feel uncomfortable about throwing away packaging and disposable plastic containers, and some have been pushing back against the deluge of disposables.

“I bring my reusable containers for take-out food these days. It was sort of embarrassing at first to ask them to put the food in a container, but many of them were willing to do so, which was surprising,” said Kim Yu-ri who began her “zero waste” drive in 2018. “Bringing a container to take out food instead of ordering online might sound bothersome, but once it becomes a habit, it is not a big thing at all,” she said. 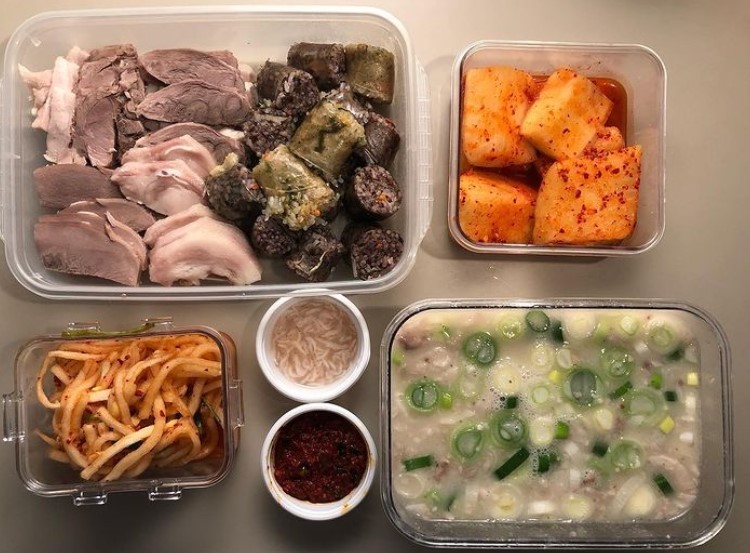 Kim Yu-ri brings glass containers to a restaurant to order takeout food without generating plastic waste. (Kim’s Instagram account, jimmy_project_)
Kim is one of a growing number of people in South Korea turning adopting a “zero waste” lifestyle – one aimed at reducing unrecyclable wastes by using eco-friendly items or reusable products instead of disposable ones

Moon Jung-youn, 41-year-old mother of two, said she became more worried about the environment after the pandemic broke out. She began to pursue a zero-waste lifestyle in June.

“Now I use a bamboo toothbrush I purchased at a zero-waste shop instead of a plastic one and began to use dishwashing soap instead of liquid soap to reduce plastic waste. I recommend starting with these two things for zero waste beginners,” she said.

The local zero waste event, “Your Bottle Week,” which ran Nov. 7 to Nov. 30 in Yeonhui-dong in northwestern Seoul, saw participation by nearly 50 shops in the neighborhood offering food or products in zero waste system. The event started in 2018 with only seven cafes participating.

Chung Da-woon -- the owner of Bottle Factory cafe, which does not use disposable cups -- initiated the zero-waste event. Chung also developed an app called “Zero Club” that people could download during the “Your Bottle Week” and accumulate points when they use zero-waste stores. Approximately 550 people participated in the zero-waste event. 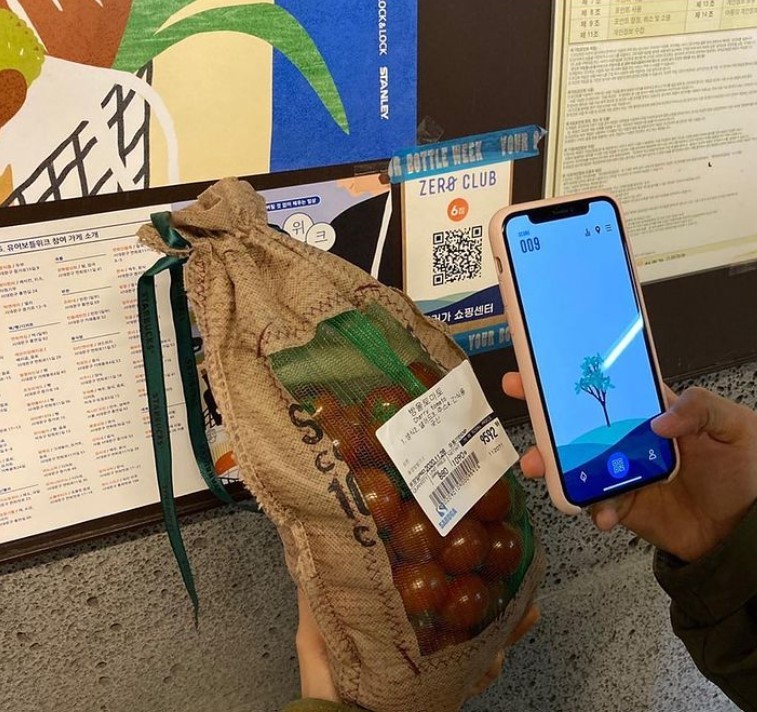 A participant in Your Bottle Week took this photo after going grocery shopping with reusable bags. People can download the Zero Club app and collect points when they use zero-waste stores. (Your Bottle Week)
"We are planning to expand ‘Your Bottle Week’ to different areas next year so that more stores can join the zero-waste system,” Chung said.

In Korea, the amount of waste during the first half of this year reached 5,349 tons, a 11.2 percent rise on-year, driven partly by the pandemic. More than 900 million disposable straws from 19 major cafes and fast food restaurants were thrown away, according to the Ministry of Environment.

As more people become interested in zero-waste lifestyles, more stores that sell reusable items and products without packaging have emerged this year. Almang Market, a zero-waste store in Mapo-gu, northwestern Seoul, is one such store, which was opened in June by three owners who share the same values and have been leading the eco-friendly movement in the area since 2018.

As soon as customers enter the store, they are asked to wash their hands in the sink to prevent the spread of the novel coronavirus. To reduce plastic waste, the store does not offer handsanitizer. The 25-square-meter store has seen customers increase gradually over the past few months.

“It seems many people did not know where to start, even though they were interested in zero waste. I was surprised to see people coming from different provinces far from Seoul,” said Yang Rae-gyo, the co-owner of the store. “I think the pandemic sparked the interest, and more zero-waste stores like us are opening these days.” 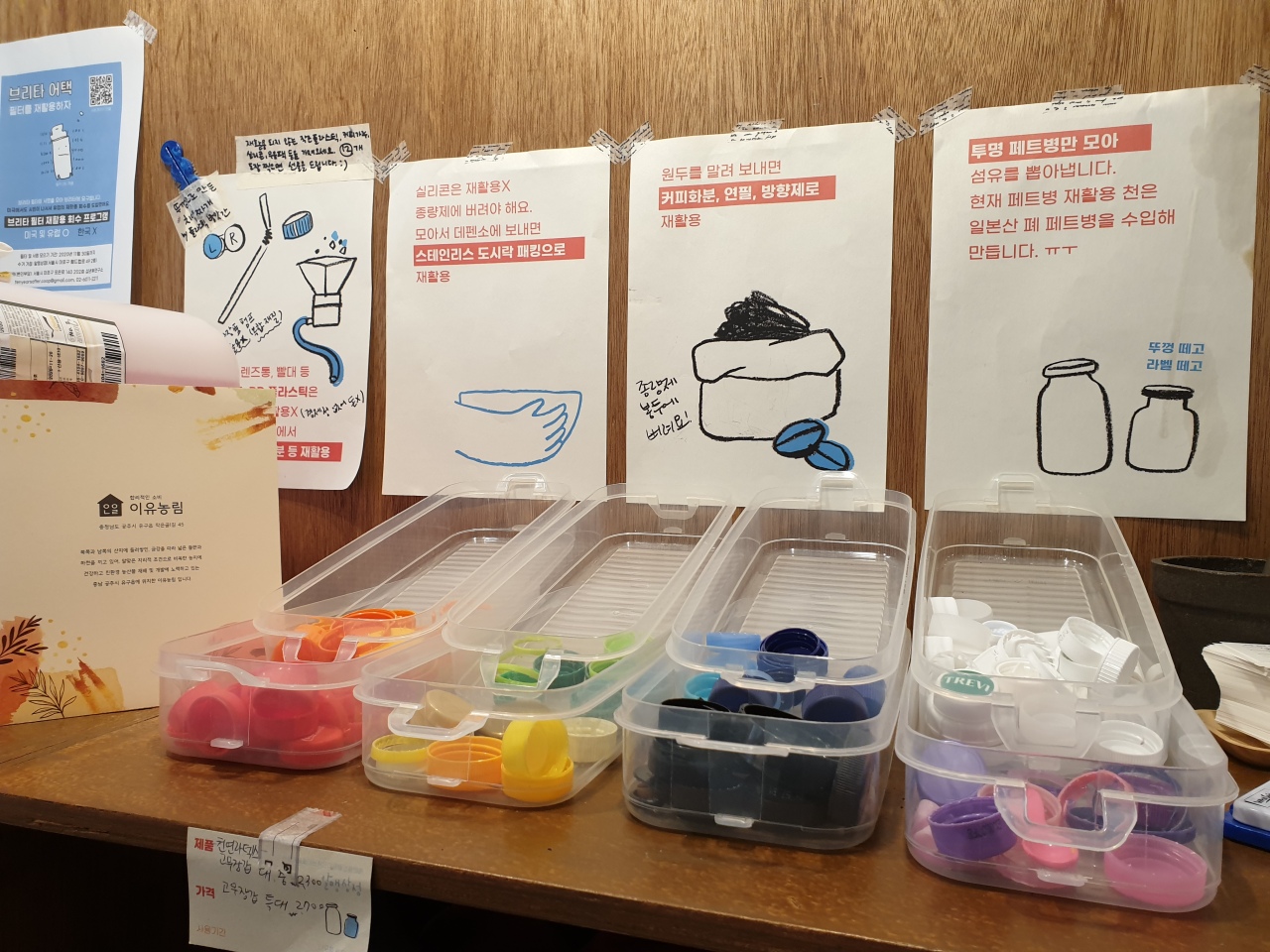 Almang Market collects plastic lids from customers, which will be turned into toothpaste dispensers, according to the store. (Park Yuna/The Korea Herald)
At the cashier‘s, two visitors who came from Suncheon in South Jeolla Province and Ilsan in Gyeonggi Province were filling luggage bags with items they had just bought. They had brought empty glass bottles from home to buy liquid products like shampoo and body wash.

“I don’t want to generate plastic trash after using body wash products. I purchase as much as I can when I come to this store. I just bought around 200,000-won worth of items,” Yang Hye-jin, an Ilsan resident said. “I wish we had zero-waste stores in my town too.” 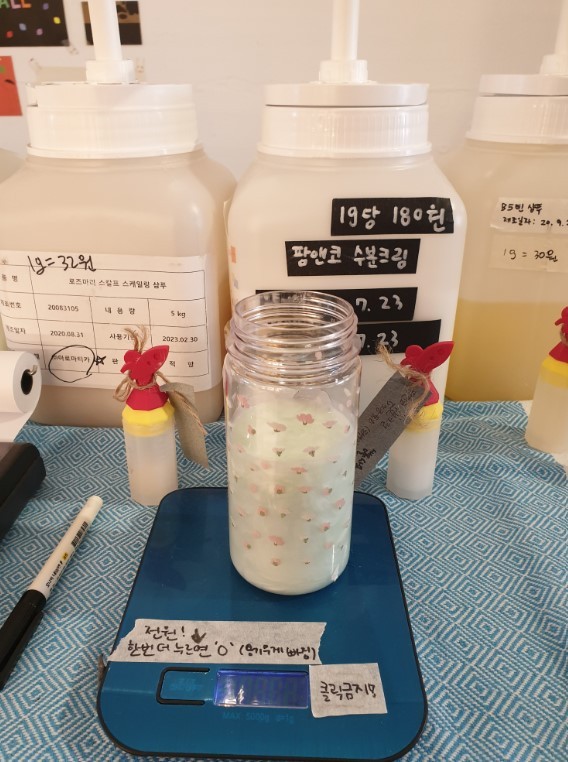 Almang Market sells liquid cosmetics without packages. Customers bring bottles and measure the products they need. (Park Yuna/The Korea Herald)
Cosmetics conglomerates began to join the zero-waste movement this year. Amoerpacific group, which operates more than 30 beauty and health brands, opened a refill station in October in Gwanggyo, Gyeonggi Province, becoming the first cosmetics conglomerate in Korea to initiate the move. The company’s refill station offers 15 kinds of body wash or shampoo, and customers can measure liquid to purchase as much as they want, according to the company.

While the demand for zero-waste stores is growing in Korea, running such a store is not easy due to the many hurdles small local stores face.

“It is difficult for small business owners like us to run a zero-waste store because although people’s interest is growing fast, there are no concrete policies to support such businesses,” Kim Mi-yeon, the owner of Donggrami Refillery, said.

“If the zero waste trend becomes more prevalent, more businesses will open to satisfy the demand. I think the government needs to pay attention to small zero-waste stores,” she added.