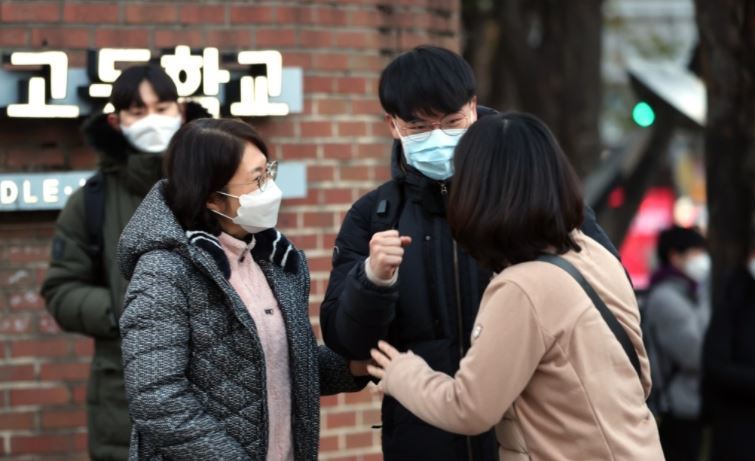 A student taking the College Scholastic Ability Test raises his fist in a show of determination before entering a test center at a high school in Seoul on Thursday. (Yonhap)

Hundreds of thousands of students took the annual national college entrance exam Thursday while taking extra precautions to guard against the continued surge of the coronavirus.

Students arrived at their designated test facilities accompanied by their family members, but there was little of the cheer typical of the scene outside schools on exam day due to restrictions caused by the pandemic.

Around 490,000 high school seniors, graduates and others signed up for the College Scholastic Ability Test (CSAT), down 10 percent from last year and the smallest number since the current exam was introduced in the 1994 school year.

In Seoul, the city government banned cheering at test centers and urged parents not to wait outside due to concerns about the virus.

Many students hugged their family members quietly before walking into their classrooms, and parents turned back without waiting.

Some students wiped away tears, while others laughed with friends and took selfies outside the school gate.

Osan High School in the central ward of Yongsan looked abandoned, unlike other schools, as only six students in quarantine were due to take the exam there.

In the central city of Daejeon, 164 kilometers south of Seoul, a high school teacher who had planned to serve as an examiner tested positive Wednesday, leading the local education office to replace 19 examiners, including the patient.

Health authorities warned students and parents against letting down their guard after the exam, saying the pandemic is serious in the capital area.

"Please refrain as much as possible from getting together with friends or talking for long periods of time in restaurants and cafes that are in closed spaces," Son Young-rae, a health ministry spokesman, said at a background briefing with reporters.

Education authorities had said the exam would go ahead as planned with strict antivirus measures in place at 1,383 test centers and 31,291 classrooms nationwide, a nearly 50 percent increase from last year. The CSAT was already postponed once in November.

"Beyond social distancing, our goal for this year's CSAT is to clearly distinguish between general test-takers, those showing symptoms (of COVID-19), those in self-quarantine and patients, and then to completely separate their movements and take thorough antivirus measures at test centers to allow everyone to take the exam in a safe environment," an education ministry official said.

The CSAT is the culmination of years of hard work for many students, and the government not only increases public transport to help students get to their test centers on time but also bans overhead flights during the English listening section.

Test-takers experiencing COVID-19 symptoms were able to get tested for the virus until 10 p.m. Wednesday at designated public health centers. If the result came back positive during the night, the student would still be able to take the exam at hospitals specializing in infectious diseases or other designated facilities.

All students were required to wear a mask and get a temperature check before entering a test center. If an examiner asked to see the student's face for identification purposes, they were required to briefly take down the mask or face suspicions of cheating if they refused.

During breaks, test-takers were asked to refrain from gathering and talking. They were also required to bring a packed lunch to eat at their desks.

Water purifiers were not installed at test centers as an antivirus precaution, and students had to bring their own water.

Students were asked to dress appropriately to stay warm, as classrooms will be ventilated at the end of each session.

Under a two-week government campaign launched Nov. 19 to enhance antivirus measures ahead of the test, all high schools were required to conduct classes online starting Nov. 26, and all students were advised to stay home if possible and refrain from using crowded facilities.

With the increased number of test classrooms, the number of examiners and other staff on duty was also increased by around 30 percent from last year to about 120,000.

Classroom capacity was capped at 24 instead of 28, and each table was fitted with a plastic divider as an added precaution. (Yonhap)