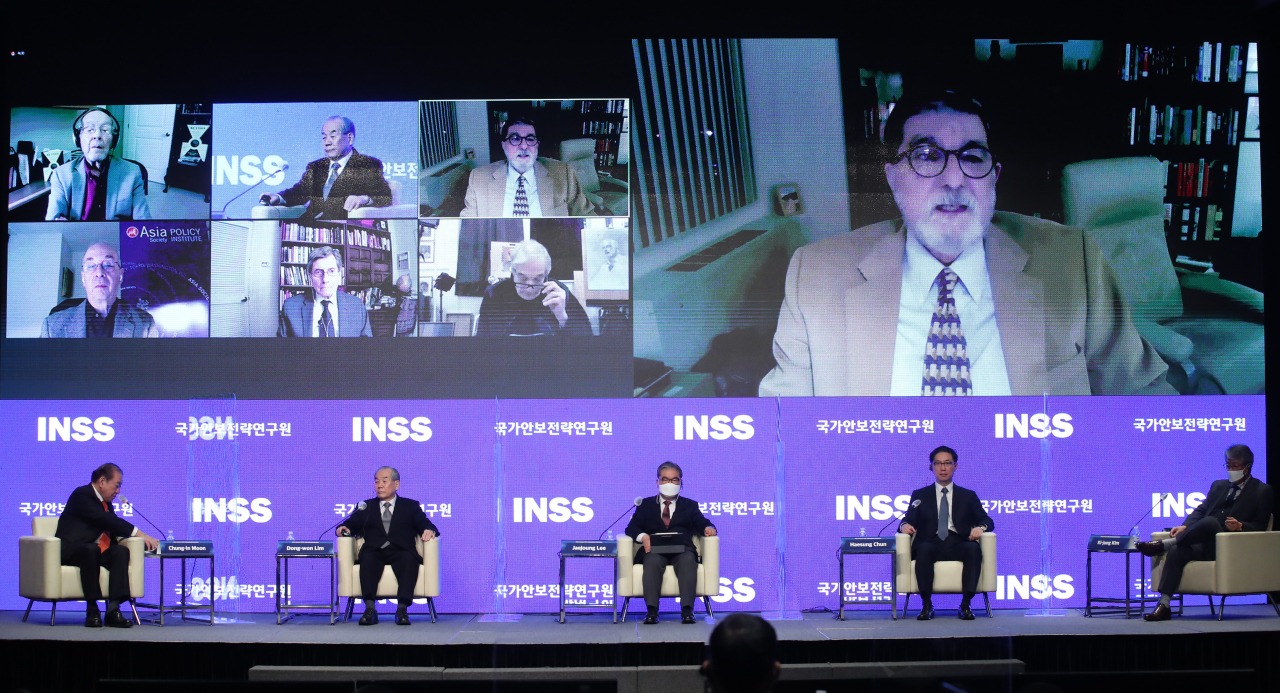 Experts in US and South Korea discuss during a forum organized by the state-run think tank the Institute for National Security Strategy on Wednesday in Seoul. (Yonhap)
Getting North Korea to give up its nuclear arsenals is “mission impossible,” former US Defense Secretary William Perry said, underlining that any future negotiators should enter talks with the reclusive regime on this premise.

“I truly believe getting North Korea to denuclearize is ‘mission impossible’ and any negotiator given that task is going to fail,” Perry said during a video-linked forum organized by the state-run think tank the Institute for National Security Strategy and Stanford University’s Center for International Security and Cooperation on Wednesday. “They do very much want economic improvement. But in my judgment, they will not trade that for a nuclear arsenal.”

This is because the North’s key priority is national security and deterrence against Washington, which the country believes it can obtain only by stockpiling nuclear weapons, said Perry, who helped defuse the 1994 North Korean nuclear crisis during the Bill Clinton administration. He is best known for drawing up a three-stage approach in 1999, dubbed the “Perry Process,” calling for the North to freeze its missile tests and nuclear development in return for the lifting of sanctions and normalized relations with the US.

That doesn’t mean Washington and Seoul should stop negotiating with Pyongyang, he stressed. The talks need to continue, but on the understanding that Pyongyang will not give up its weapons, and toward a reasonable goal for normalizing the nation.

“We should be negotiating. We do need to moderate the nuclear program and arsenal they have and we could work to make them a normal nation so that they do not feel the need to take the action they take, which provoked the United States, South Korea and the whole world.”

And key to normalizing Pyongyang is Seoul, which can assist the country’s economic development, he said.

In contrast, Joseph DeTrani, who was the former US special envoy to the six-party talks during the George W. Bush administration, believes denuclearizing the North is possible in return for economic and security assurance, though it would take time and effort.

“I believe (North Korea) still will pursue a highly enriched uranium program and nuclear weapons until we can get some sort of agreements with them and move towards a complete, verifiable denuclearization,” he said.

“Staying with the element of completely verifiable denuclearization, I believe, is attainable. It will take time. It will take a lot of time. But my experience with North Korea was, I saw them up close and I negotiated with them. And I concluded that they do want normal relations.”

Robert Gallucci, a former chief US negotiator who is behind the Agreed Framework with North Korea in 1994, shared some of the things that surprised him when he negotiated with North Koreans, providing insights for future talks.

“North Koreans would stake out a lot of firm positions, which were not at all firm,” he said. “I was surprised by the fact that I could hear from them pretty definitely that they will never do something, and then it would come up that there were certain circumstances under which they would do it,” he said, adding that the North is flexible in “give and take.”

Daniel Russel, assistant secretary of state for East Asian and Pacific Affairs during the Barack Obama administration, said the key takeaway from dealing with Pyongyang is to figure out what the country’s needs are before entering the talks.

Meanwhile, Lim Dong-won, former director of national intelligence and unification minister during the Kim Dae-jung administration, stressed that what matters is political will and determination, more than negotiation strategy and technique.

“The negotiation makes rapid progress when there is political will and determination to reach policy decisions and agreement,” he said. “I believe we can solve North Korea’s denuclearization issue.”

Lim, who met former North Korean leader Kim Jong-il as Seoul’s point man on Pyongyang, suggested the incoming Biden administration take a step-by-step approach and adopt a “give and take” policy of normalizing relations in return for denuclearization. That is, he said, creating a peaceful environment where Pyongyang would no longer feel the need to retain its nuclear arsenal.