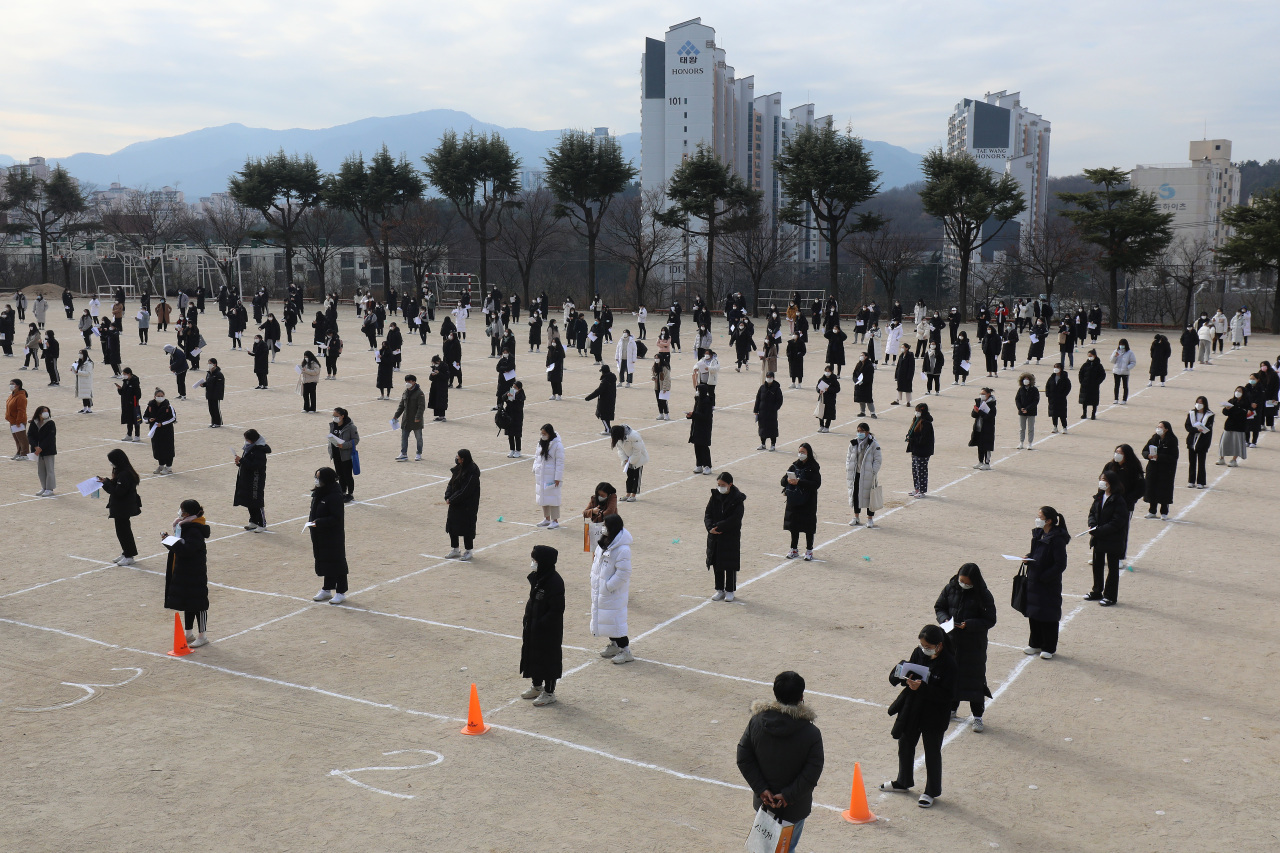 College hopefuls in Daegu attend the orientation event ahead of the annual College Scholastic Aptitude Test slated for Thursday. (Yonhap)
Tens of thousands of college hopefuls in South Korea will take the annual national college entrance exam Thursday, so important that many here describe it as one of the most pivotal moments in life.

The College Scholastic Aptitude Test, or the Suneung, will begin at 8:40 a.m. at over 1,300 testing sites across the country, and will last until 5:40 p.m. Some 493,433 college hopefuls are to sit the marathon test.

Coming amid a fresh wave of COVID-19 infections, this year’s Suneung is arguably the biggest test for the country’s so-far successful response to the pandemic. The focus for local authorities has been giving equal opportunity to all with or without the virus, while ensuring their safety.

“Since early November, the Education Ministry and the Korea Disease Control and Prevention Agency have been collaborating to accommodate all those with the virus or under quarantine for Suneung,” said Vice Education Minister Park Baek-beom in a briefing Wednesday.

“(Separate) test sites and transportation means are now all prepared for those exam takers.”

The country has prepared 31,291 testing rooms, nearly 50 percent more than in previous years, the official added.

Of them, 580 testing rooms at 113 testing sites are designated for those currently under quarantine. They can accommodate as many as 3,775. A total of 25 hospitals and four nonhospital treatment centers nationwide can host up to 205 test takers confirmed with COVID-19.

As of Monday, a total of 37 test takers have been diagnosed with the disease, and 430 others under mandatory self-isolation for potential exposure to the virus.

Out of the 37 with COVID-19, two have declared that they will not take the test this year. Of those quarantined, some 26 decided to forgo the exam.

Health and education authorities will be on emergency alert until late Wednesday to respond to any last-minute events. Virus testing centers were to remain open until 10 p.m., four hours later than usual.

Should there be a test taker showing symptoms or identified as a close contact of a confirmed patient, officials will fast-track his or her diagnostic testing so that the person can be given special accommodation for Suneung.

On Wednesday, orientations were held across the country, but test takers were not allowed to enter their designated testing rooms. It has been customary for test takers to be able to examine their testing room and seat.

Even after the Suneung, the ensuing college admissions process could be a challenge to the country’s virus control efforts, the vice education minster said.

“Throughout December, around 600,000 college hopefuls will be applying for admission at universities,” a process that typically involves in-person interviews and tests, Park said.