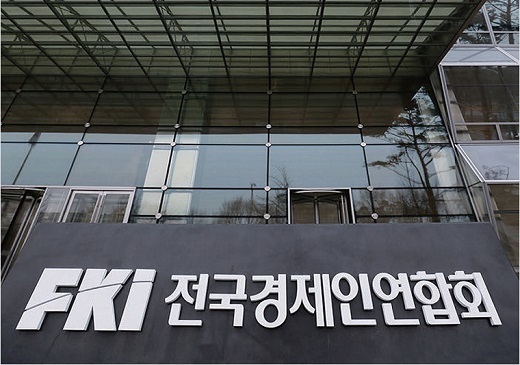 Federation of Korean Industries’ headquarters building in Seoul (Yonhap)
Foreign-invested companies rated South Korea’s business environment as excellent overall, but were unsatisfied with the labor environment and the passive attitude of the authorities, survey showed Monday.

The Federation of Korean Industries conducted a survey for trade and investment officers as well as foreign economic organizations of the top 50 foreign investment countries in Korea about the business environment in the nation. The survey took place from Oct. 12 to Nov. 6.

While giving a good assessment overall with 71.4 percent saying the general business environment in Korea was “excellent,” the respondents gave biting reviews on the country’s regulatory systems and benefits for foreign investors.

More than half of the respondents said difficulties related to regulations such as in taxation and labor issues have intensified over the past three years.

When asked about the degree of regulatory change over the past three years compared to the past, about half of them answered that the tax environment has become very bad (5.3 percent) or bad (47.4 percent). Thirty-seven percent of the respondents said there has been no change and 10.5 percent said “improved.”

When asked about specific policies that have affected business activities over the past three years, they cited the abolition of tax reduction benefits for foreign-invested companies in 2019, the implementation of the 52-hour workweek and a sharp increase in the minimum wage.

As for the satisfaction level of the Korean authorities handling difficulties of foreign companies, 50 percent of the respondents said it was “average” and 45 percent said “satisfactory.”

However, when asked what needs to be improved regarding the authorities’ handling difficulties, “passive willingness to resolve difficulties” (42.9 percent) was the most common answer.

Other areas they said needed to be improved included lack of policy consistency (17.9 percent), frequent change of personnel (17.9 percent) and complicated procedures due to redundant regulations (14.3 percent).

In terms of the most necessary thing to improve the business environment in Korea, the elimination of complex administrative procedures and bureaucracy (34.9 percent) was the highest.

This was followed by improvement of regulations (19.0 percent), improvement of laws and systems that hinder innovation (17.5 percent) and efforts to resolve rigid labor-management relations (9.5 percent).

“Korea needs to improve the business environment for foreign-invested companies so that they can continue to create employment and expand investment in Korea amid worsening performance in the wake of the COVID-19 crisis,” said Kim Bong-man, head of the FKI’s international cooperation office.

“As shown in the survey, policy authorities need to be more active in resolving the difficulties for foreign-invested companies.”

In addition, 76.2 percent of the respondents said they recommend Korea to other local companies that are considering overseas expansion.