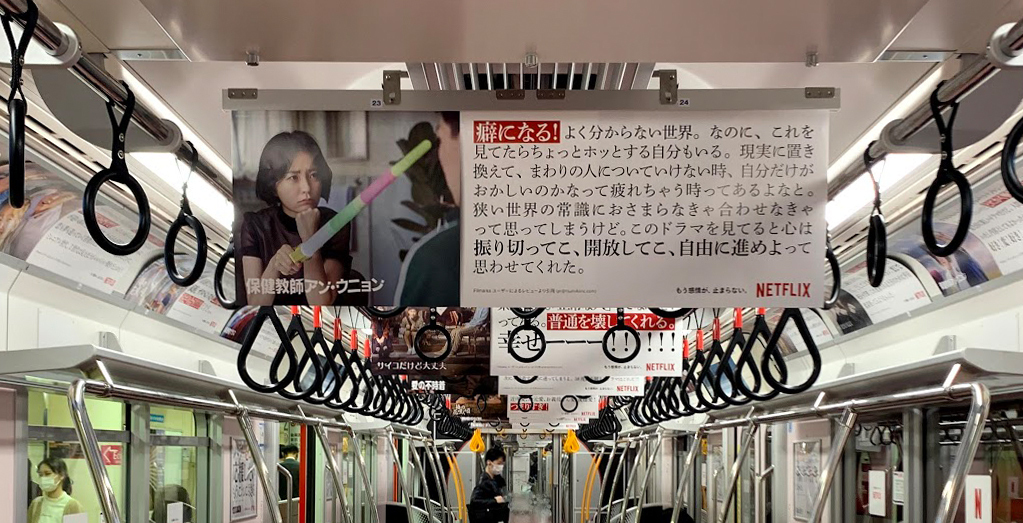 An advertisement for K-drama “The School Nurse Files” on Netflix is shown in a subway in Japan. (Netflix)
With many Korean dramas and movies heading to Netflix, the platform, with services in 190 countries, is becoming a major medium for the spread of Korean pop culture.

Korea Trade-Investment Promotion Agency’s African sector recently mentioned Netflix as one of the reasons for the popularity of Korean culture in South Africa.

The Chicago Council on Global Affairs announced in October that South Korea’s favorability is at 60 on a zero-to-100 scale, the highest yet. Besides favorability rising because of Korea’s handling of the COVID-19 pandemic, Korean programs reaching US audiences through Netflix was seen as a key factor.

“Netflix has brought Korean television shows into more US homes than ever before,” said CCGA.

Netflix’s role in spreading Hallyu is even bigger in Japan, where Korean movies and dramas on Netflix are capturing Japanese viewers. For example, tvN’s hit drama “Crash Landing on You” starring Hyun Bin and Son Ye-jin started showing on Netflix in February. In addition, Korean TV dramas such as JTBC’s “Itaewon Class” and tvN’s “It’s Okay to Not Be Okay,” among others, have been at the top of the country’s Netflix charts for months, with the main characters’ fashion and hairstyles grabbing particular attention. 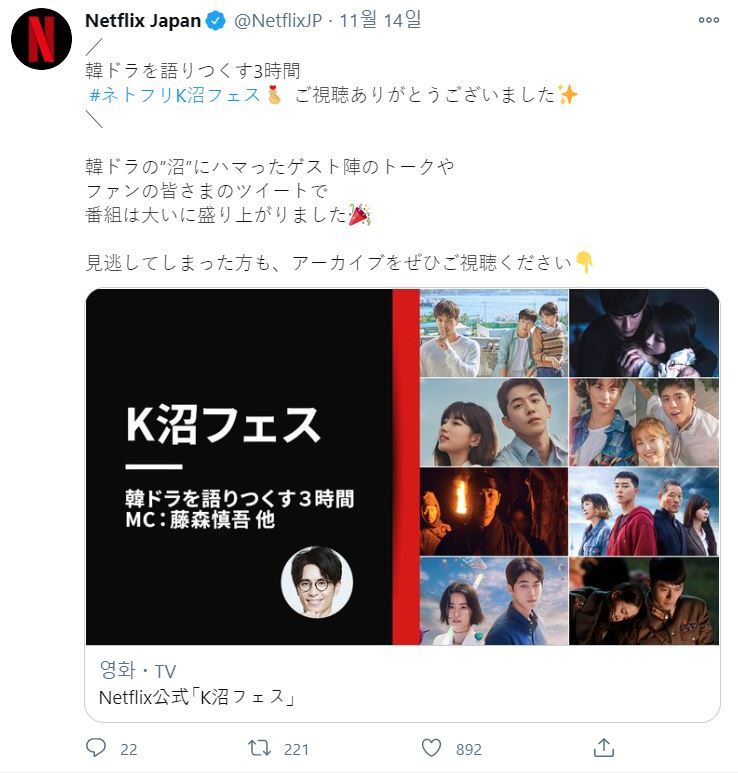 Official Twitter image of “Netflix K Swamp Festival” (Netflix)
With the success of Korean content in Japan, Netflix streamed “Netflix K Swamp Festival” online on Nov. 14, hosted by Japanese comedian Shingo Fujimori, which showed behind-the-scenes stories of popular K-drama productions and took a look at what makes them attractive. Also shown were actors of the dramas thanking the fans.

Popularity of Korean dramas is not limited to specific regions. For example, tvN drama “Start-Up” featuring Suzy and Nam Joo-hyuk is currently among the 10 most popular Netflix shows in the world, according to data analytics Flix Patrol.

“A new platform, Netflix, has allowed Hallyu to go beyond fandom culture and evolved it into pop culture,” said Hong Seok-kyeong, a professor at Seoul National University’s department of communication, in an online forum held in September. “These services have created new consumers and value that go beyond space, time and genre, contributing to the expansion of a new Hallyu.”