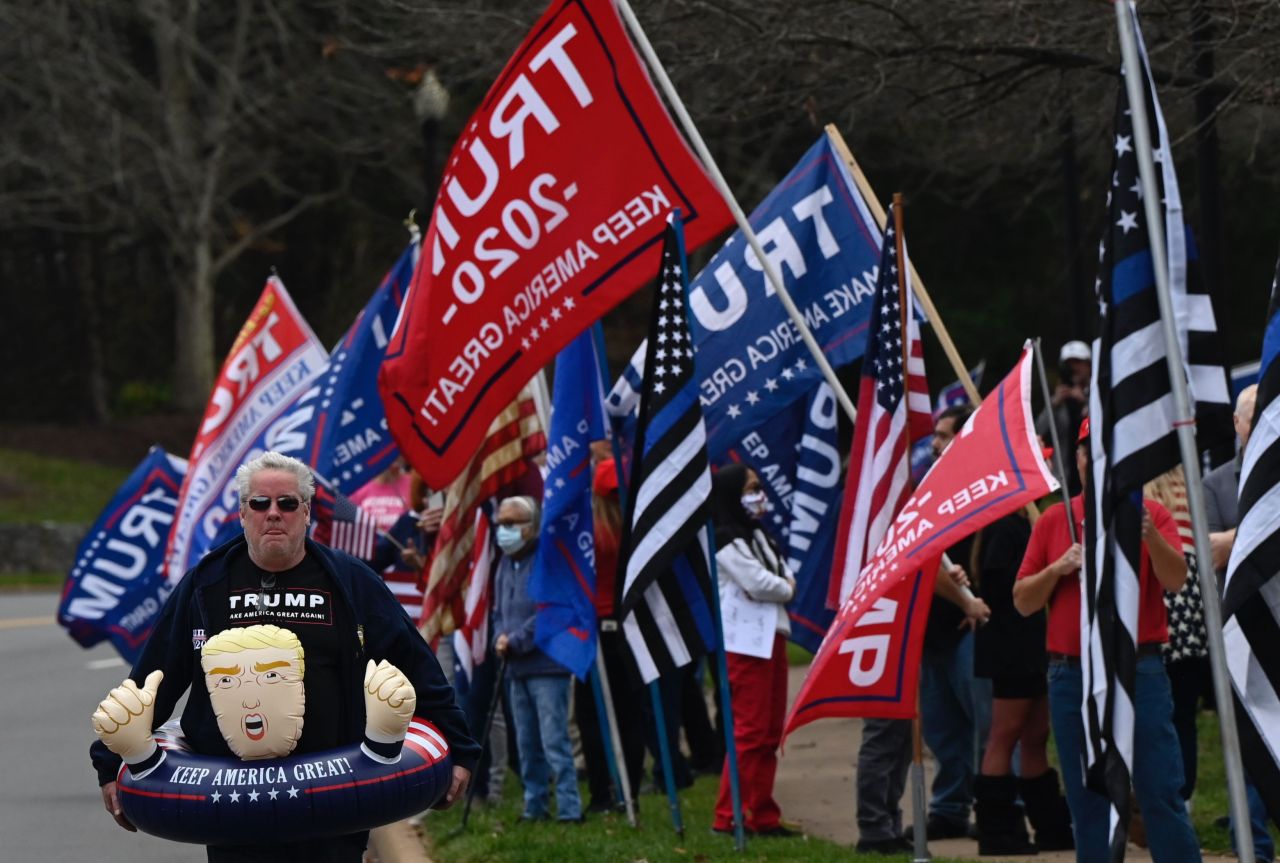 Supporters of US President Donald Trump wait in line after playing golf in Sterling, Virginia on Saturday. (AFP-Yonhap)
WASHINGTON (AFP) -- A Pennsylvania judge on Saturday threw out Donald Trump's claims of widespread electoral fraud there, dealing a new blow to the Republican's bid to overturn his loss in the US presidential election.

The decision -- announced in a scathing judgment which excoriated the Trump team's legal strategy -- paves the way for Pennsylvania to certify Democrat Joe Biden's victory there, which is scheduled to take place Monday.

With the clock ticking down to Biden's January 20 inauguration, Trump's team has focused on trying to stop battleground states from certifying election results, in addition to his numerous legal challenges that have so far failed.

Judge Matthew Brann wrote in his ruling that Trump's team had presented "strained legal arguments without merit and speculative accusations" in their complaints about mail-in ballots in Pennsylvania.

"In the United States of America, this cannot justify the disenfranchisement of a single voter, let alone all the voters of its sixth most populated state," Brann wrote.

Biden won the state-by-state Electoral College votes that ultimately decide who takes the White House by 306 to 232.

The Electoral College is due to formally vote on December 14, with certifications to take place beforehand.

States' certification of results of their popular votes is usually routine following a US presidential election.

But Trump's refusal to concede has complicated the process and drawn concerns that he could cause long-term damage to Americans' trust in their voting system.

Only a limited number of Republicans have so far recognized Biden as the winner and called on Trump to concede.

The Pennsylvania court ruling prompted a Republican senator from the state, Pat Toomey, to join those ranks, saying Biden "won the 2020 election and will become the 46th president of the United States."

"President Trump should accept the outcome of the election and facilitate the presidential transition process," Toomey said in a statement that congratulated Biden while specifying he voted for Trump.

The judgement in Pennsylvania came hours after Republicans also requested a delay in certification in Michigan, another battleground, in a letter that repeated allegations of irregularities in the state which Biden won by 155,000 votes.

They asked for a delay of two weeks to allow for a full audit of results in Wayne County, the state's largest and where majority-black Detroit is located, which was won overwhelmingly by Biden.

Michigan's board of canvassers, which includes two Democrats and two Republicans, is also due to meet Monday to certify the results.

Republican Party national committee chairwoman Ronna McDaniel and the party's Michigan chair Laura Cox called on the board to "adjourn for 14 days to allow for a full audit and investigation into those anomalies and irregularities."

Michigan's Secretary of State Jocelyn Benson has said that audits cannot be conducted until after certification because officials do not have legal access to the documents needed until then.

On Saturday, she posted on Twitter that there had been "no evidence" to draw into question the result of the election.

"In a nutshell: 5.5m Michigan citizens voted," she wrote.

"The results of their votes are clear. No evidence has emerged to undermine that."

On Friday, Trump invited Michigan lawmakers to the White House as part of his bid to subvert the voters' will, but the legislators stood firm, saying they would honor the election's outcome.

Biden has so far moderated his criticism of Trump's actions, though he has spoken of "incredibly damaging messages being sent to the rest of the world about how democracy functions," adding: "It's hard to fathom how this man thinks."

Trump has rarely appeared in public since his electoral loss, but has not given up on his provocative Twitter campaign.

"The proof pouring in is undeniable," he tweeted Saturday, when he also golfed.

"Many more votes than needed. This was a LANDSLIDE!"