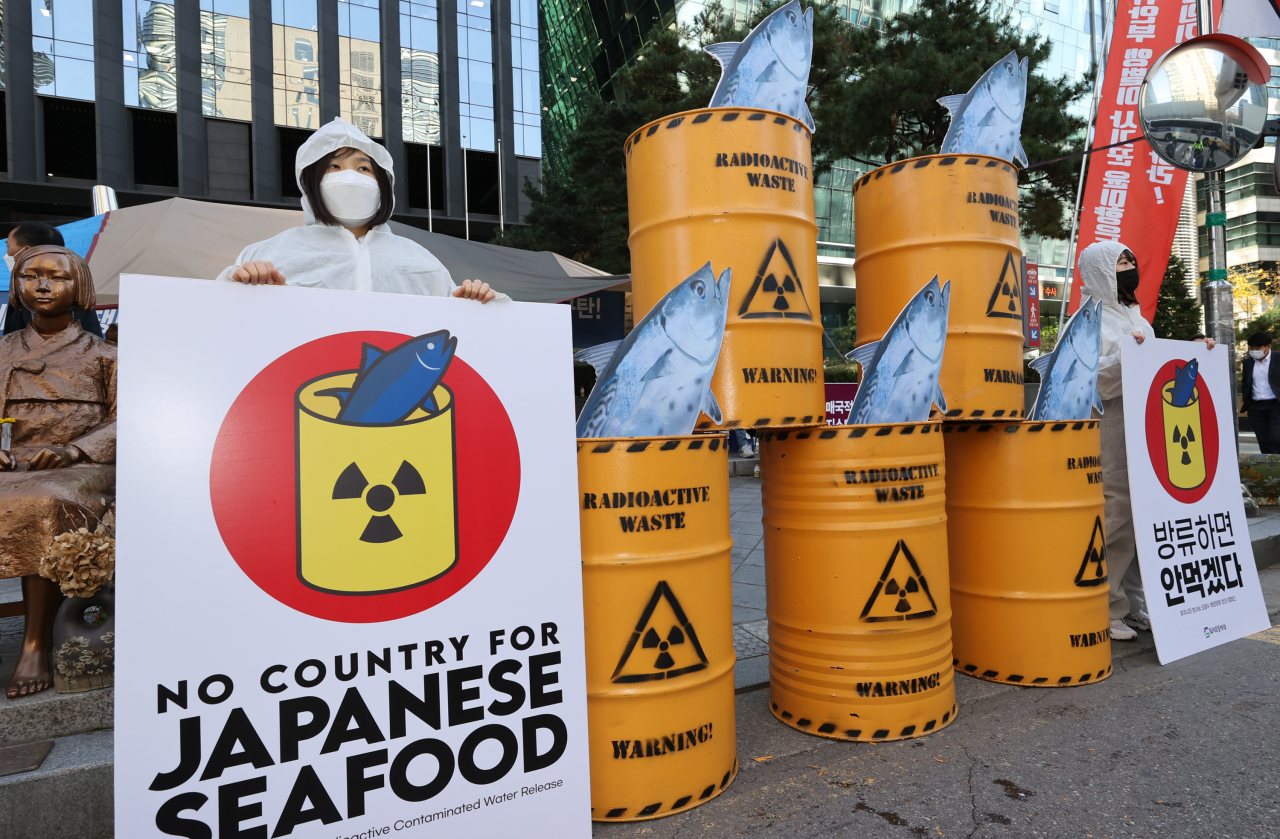 Activists stage a campaign against Japan's envisioned plan to discharge into the sea the contaminated water from its wrecked Fukushima nuclear plant in front of the former site of the Japanese Embassy in Seoul, located in Seoul's central Jongno district, on Nov. 9. (Yonhap)
Japan is willing to work with South Korea on the monitoring of the envisioned treatment and release into the ocean of contaminated water from the wrecked Fukushima nuclear power plant, a senior embassy official said Friday.

The official's remark comes as Tokyo is expected to soon announce its plan to gradually discharge into the sea more than 1.2 million tons of radioactive water stored in tanks since the 2011 meltdowns following an earthquake and tsunami.

Tokyo has pushed for the disposal into the Pacific Ocean, saying that the storage capacity will run out by the summer of 2022 and that it's the most realistic and relatively harmless disposal method. But such a plan has sparked strong opposition and worries among the public in both South Korea and Japan.

"We will disclose all information if you're interested in monitoring," an official from the Japanese Embassy in Seoul said on condition of anonymity during a media briefing when asked if Tokyo is willing to verify the treatment process and share related data with Seoul.

Exactly how the monitoring will be carried out and shared with other countries has yet to be decided, but Tokyo intends to do it through consultations with neighboring countries, the official said.

"We are fully aware of the South Korean government's policy and will faithfully respond to that."

He added, though, that the actual monitoring, if decided, likely won't take place until 2022 when the disposal process would begin in earnest.

Japan was expected to finalize the decision late last month but put off the announcement apparently due to strong opposition from the local fisheries industry.

Seoul has repeatedly called for Tokyo to provide concrete explanations as to how it will deal with the radioactive water and transparently share information related to the disposal plan.

Regarding the disclosure of related information, the embassy official stressed that the Japanese government will continue efforts to provide details so as to help dispel worries and fear harbored by South Koreans.

"We have had various occasions where we heard the opinions of many countries, including South Korea ... and we'll continue to do so. We are frequently in contact and cooperating with the South Korean government," he said.

Environmental groups and activists, such as Greenpeace, have voiced concerns over unknown long-term effects of releasing the treated water and called for further examination.

The Tokyo Electric Power Corp., which operates the plant, says the water will be treated enough to remove all radioactive material before its release except for tritium, an element that it says is largely harmless.

Such a disposal method is also a common standard of practice already employed by other countries, according to Japanese officials. (Yonhap)