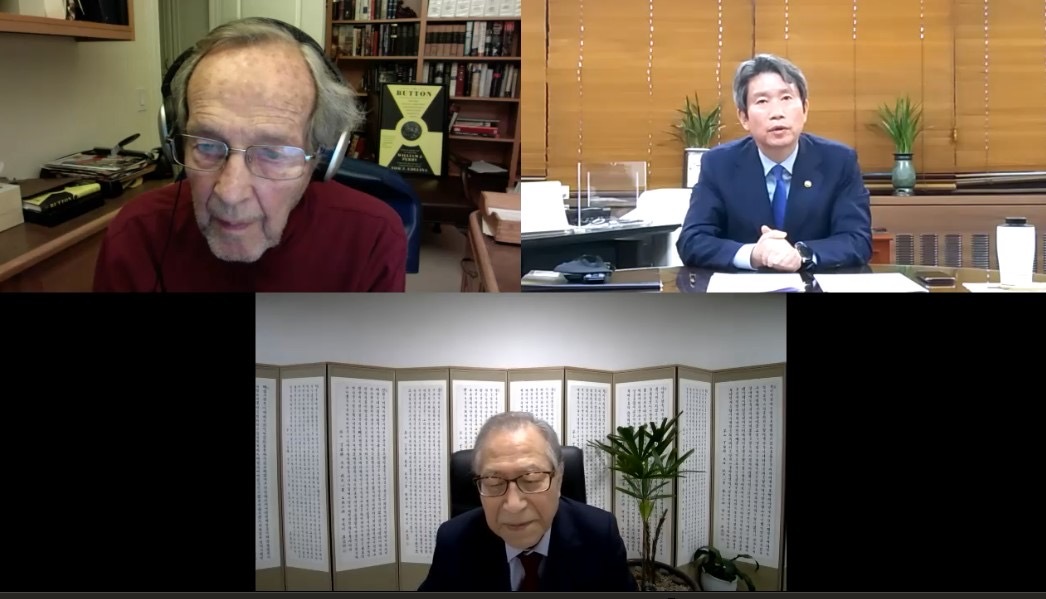 During the three-way meeting, Perry said using a “diplomatic solution” to achieve denuclearization on the Korean Peninsula would still be effective despite the changes in the situation since he served under the Bill Clinton administration from 1994-1997, such as the North having acquired nuclear capabilities. He also stressed that Washington and Seoul need to create a more advanced version of a denuclearization and peace process, according to the Unification Ministry.

Lee vowed to strengthen cooperation with Washington to restart the Korean Peninsula peace process, taking a lesson from the “Perry Process,” which was based on coordination and cooperation between then-South Korean President Kim Dae-jung and then-US President Clinton.

Perry, one of few senior US officials to have negotiated directly with North Koreans, is best known for drawing up a three-stage proposal in 1999 to end the North’s missile and nuclear programs. The step-by-step approach called for North Korea to freeze its missile tests and nuclear development in return for the lifting of sanctions and normalized relations with the US.

This later paved the way for a visit to Washington by the North’s Vice Marshal Jo Myong-rok and a subsequent trip to Pyongyang by Secretary of State Madeleine Albright, as well as the historic US-DPRK Joint Communique. The DPRK stands for North Korea’s official name, the Democratic People’s Republic of Korea.

Jeong, underlining that Perry’s approach has eased tensions on the Korean Peninsula in the past, called for an upgraded version of the Perry Process to tackle denuclearization.

Later in the day, Jeong mentioned at a forum that Perry is planning to meet Biden next month and will suggest solutions for denuclearizing the North at the meeting.

“Perry said he will suggest (Biden) to appoint a policy coordinator on North Korea, and South Korea to do the same, so that the policy coordinators can solve the denuclearization issue,” said Jeong, sharing the three-way discussion at a forum hosted by the NUAC. “In order to solve the North’s denuclearization issue, he suggested to take a similar approach to the past, although the situations have changed.”