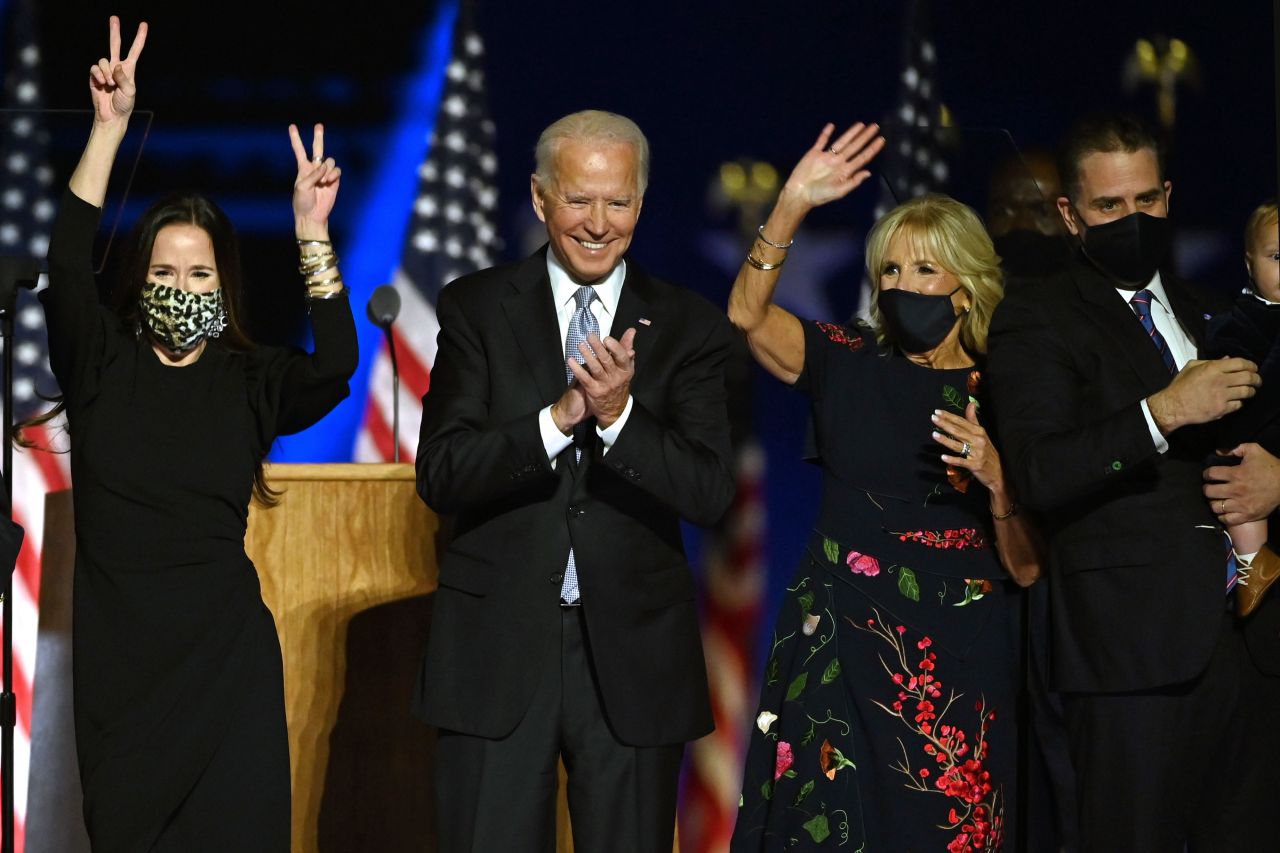 After jogging onto the outdoor stage to the sounds of Bruce Springsteen in his hometown of Wilmington, Delaware, Biden delivered a message of hope and healing to a crowd of cheering supporters and tens of millions more on television.

The victory speech followed a desperately bitter election conducted in the midst of a raging coronavirus pandemic. But instead of sounding triumphant, Biden's accent was more on changing hearts in a country split down the middle between Democrats and Republicans.

Promising "not to divide but unify," Biden reached out directly to Trump supporters, declaring "they're not our enemies, they're Americans."

"Let's give each other a chance," he said, urging the country to "lower the temperature."

"Let this grim era of demonization in America begin to end, here and now."

Casting his eye further, Biden said he would "make America respected around the world again" -- a reference to Trump's tearing up of traditional diplomatic ties.

"Tonight, the whole world is watching America and I believe that at our best America is a beacon for the globe," he said.

Addressing the coronavirus, which has killed more than 237,000 Americans under Trump's erratic leadership, Biden said he would form a task force of "leading scientists" this Monday.

While attendance was limited for social distancing purposes to about 360 cars at the drive-in style event, crowds numbering thousands of people, many of them dancing and waving American flags, lined the highway leading to the facility. 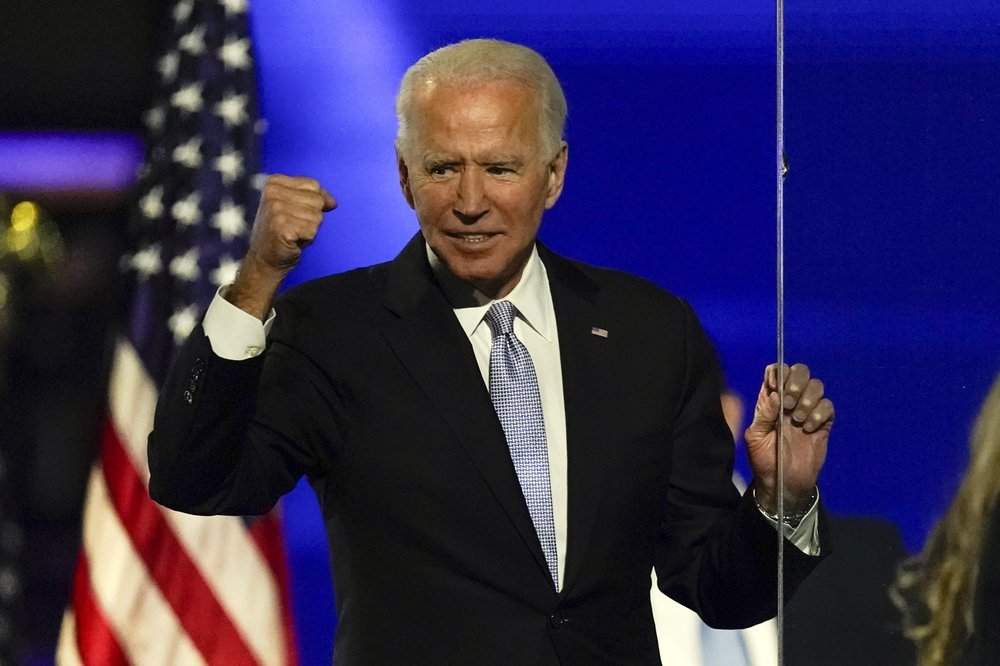 President-elect Joe Biden gestures to supporters on Saturday, in Wilmington, Del. (AP-Yonhap)
This was Biden's first public appearance since US television networks declared earlier Saturday that he'd taken an insurmountable lead in the nearly complete count from Tuesday's election, giving him victory against Trump, who will now become a rare one-term president.

The celebratory event, which featured a confetti canon, fireworks and a soundtrack including Springsteen and Tina Turner, also gave Americans a closer look at Biden's running mate Kamala Harris, who will make history as the country's first female and first Black vice president.

In her speech, cheered every few seconds by the ecstatic crowd, Harris lauded the record turnout of some 160 million people in the election and said that after so much division, "Joe is a healer."

"When our very democracy was on the ballot in this election, with the very soul of America at stake, and the world watching, you ushered in a new day for America," she said.

Biden, who is 77 and turns 78 later this month, will be the oldest person to become president when he takes office on January 20.

Crowds took to the streets in major cities across the US in celebration of Trump's defeat, while key Western allies such as Germany, which had a tempestuous relationship with the Republican, quickly congratulated Biden.

But Trump -- becoming the first one-term president since George H. W. Bush -- refused to concede and continued to claim he was a victim of fraud.

Biden was "rushing to falsely pose" as the winner, Trump said in a statement as he arrived to play golf at a course he owns in Virginia, his first trip outside the White House since Election Day.

There is no evidence to support Trump's unprecedented claims of mass fraud.

Tuesday's polling went off without any reported serious incidents or even technical glitches, despite the shadow of a still out-of-control Covid-19 pandemic and volcanic political tensions.

With vote-counting nearly complete around the huge country, Biden built up an irreversible lead. New tallies from the state of Pennsylvania early Saturday put him over the top, ending four days of tense waiting and allowing the TV networks' specialized data analysts to call the overall result, as they do every election.

In Philadelphia, Los Angeles, Washington and other majority-Democratic cities, people poured into the streets to celebrate and car horns honked.

An excited crowd of several thousand gathered on Black Lives Matter Plaza next to the White House, giving a hostile reception to Trump as his motorcade passed nearby on return from the golf course.

"It's been so many years waiting for this day to happen," said Jack Nugent, a 24-year-old software engineer.

There were similar scenes in New York, Trump's birthplace.

"I'm happy that Trump has gone from our lives, hopefully forever," said Catherine Griffin, 47, through tears of happiness.

However, in Arizona, where the race was close, a group of almost 1,000 Trump supporters gathered in Phoenix to protest what they said was a stolen election.

"There's a lot of fraud here. It needs to be either redone totally or recounted," Donna McCollum, 77, said.

For Biden, who got more than 74 million votes, a record, the triumph was the crowning achievement of his half-century in US politics -- including eight years as deputy to Obama, the first Black US president who hailed the "historic and decisive" win.

Biden vows to get the coronavirus pandemic under control. He also promises to restore traditional US diplomacy after Trump's dramatic pivot to unilateral nationalism.

The head of the NATO military alliance, which reeled from Trump's disruptive approach after decades of US leadership, also quickly welcomed Biden's win.

President Ashraf Ghani of Afghanistan, from where Biden has pledged to bring US combat soldiers home, tweeted congratulations and calling the US a "foundational partner" in the fight against counterterrorism.

There was no immediate reaction from other big players in US relations, including China, Russia and Saudi Arabia.