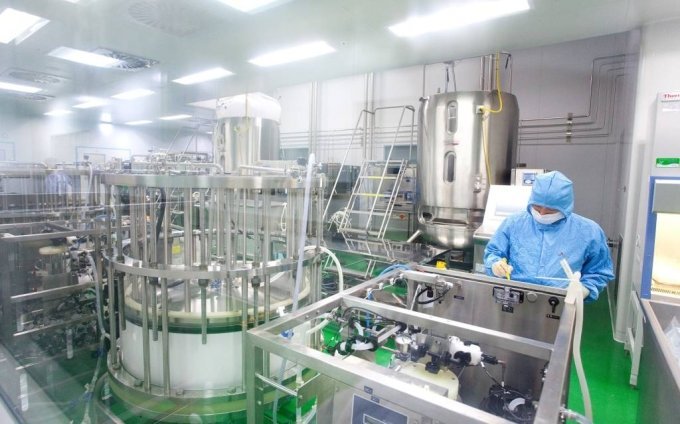 (Yonhap)
South Korean pharmaceuticals and biologics companies produced conflicting third-quarter reports, some of them boosted by their involvement in COVID-19-related pipelines.

The companies that fared better than the others had flu vaccines and treatments for chronic illnesses in their portfolios. Both areas saw newfound interest amid the pandemic.

GC Pharma, for instance, notched a record quarterly operating profit in the third quarter of 2020 at 50.7 billion won ($44.5 million) -- up 14.5 percent from the same period last year. This marked the best number GC Pharma had seen in six years. In the same period, revenue went up to 419.6 billion won, up 14.5 percent year-on-year and the highest the company has recorded in any quarter.

The COVID-19 pandemic is shining a spotlight on influenza vaccines for “twindemic” prevention in the Northern Hemisphere. GC Pharma’s revenues from the flu vaccine increased 21.5 percent on-year to 127 billion won.

Chong Kun Dang Pharmaceutical and Boryung Pharmaceutical continued growth despite the COVID-19 situation on the back of their treatments for chronic illnesses such as high blood pressure and diabetes.

In the third quarter, Chong Kun Dang recorded revenue of 357.5 billion won and operating profit of 48.5 billion won, up 27.5 percent and 139.5 percent, respectively.

Daewoong Pharmaceutical in its third-quarter report marked a revenue of 248.9 billion won, up 2.7 percent on-year, and an operating profit of 7 billion won, up 151 percent.

Despite the company’s disposal of ranitidine-based antiulcer treatment Albis tablets and the ongoing suit with the US International Trade Commission against botulinum toxin company Medytox concerning trade secrets, Daewoong said it was able to come out strong because of sales of its BTX product Nabota in Korea. Nabota sales hit 11.3 billion won in Korea and overseas combined, up 37.2 percent from the same period a year before.

In the prescription medicine area, the company broke its own record even with a temporary sales ban of Albis on the back of increased sales of other drugs. Daewoong made 188.9 billion won, up 8 percent on-year, through selling prescription medicine. Hyperlipidemia drug Crezet tablets especially towed the sales by making a 66.4 percent growth.

Samsung Biologics in the third quarter marked an operating profit of 56.5 billion won, up 139.5 percent from the year before and surpassing its 2019 yearly operating profit. Its revenue reached 274.6 billion won, lining it up for a likely entry to the club of companies that make 1 trillion won in revenue in a year.

On the opposite side of the picture, Hanmi Pharm and Dong-A ST showed lackluster performances.

Hanmi Pharm entered the red in the third quarter after Sanofi returned the rights to its diabetes treatment pipeline efpeglenatide in May. Hanmi marked an operating loss of 32.3 billion won, and a slight 0.5 percent increase in revenue at 266.9 billion won.

A Hanmi official told The Korea Herald that much of the uncertainty has been resolved due to the lump-sum payment, and that from the fourth quarter onward Hanmi will be able to put forth what is purely its own earnings and operating profit.

Dong-A ST also saw a reduction in royalty payments and sluggish sales amid the effects of COVID-19.

Dong-A ST’s lackluster performance was attributed to fewer patients visiting hospitals for routine appointments amid the COVID-19 pandemic, resulting in proportionately lower sales of prescription medicines. Its out-license royalties in the quarter were 5.2 billion won, down 65.9 percent from the year before.