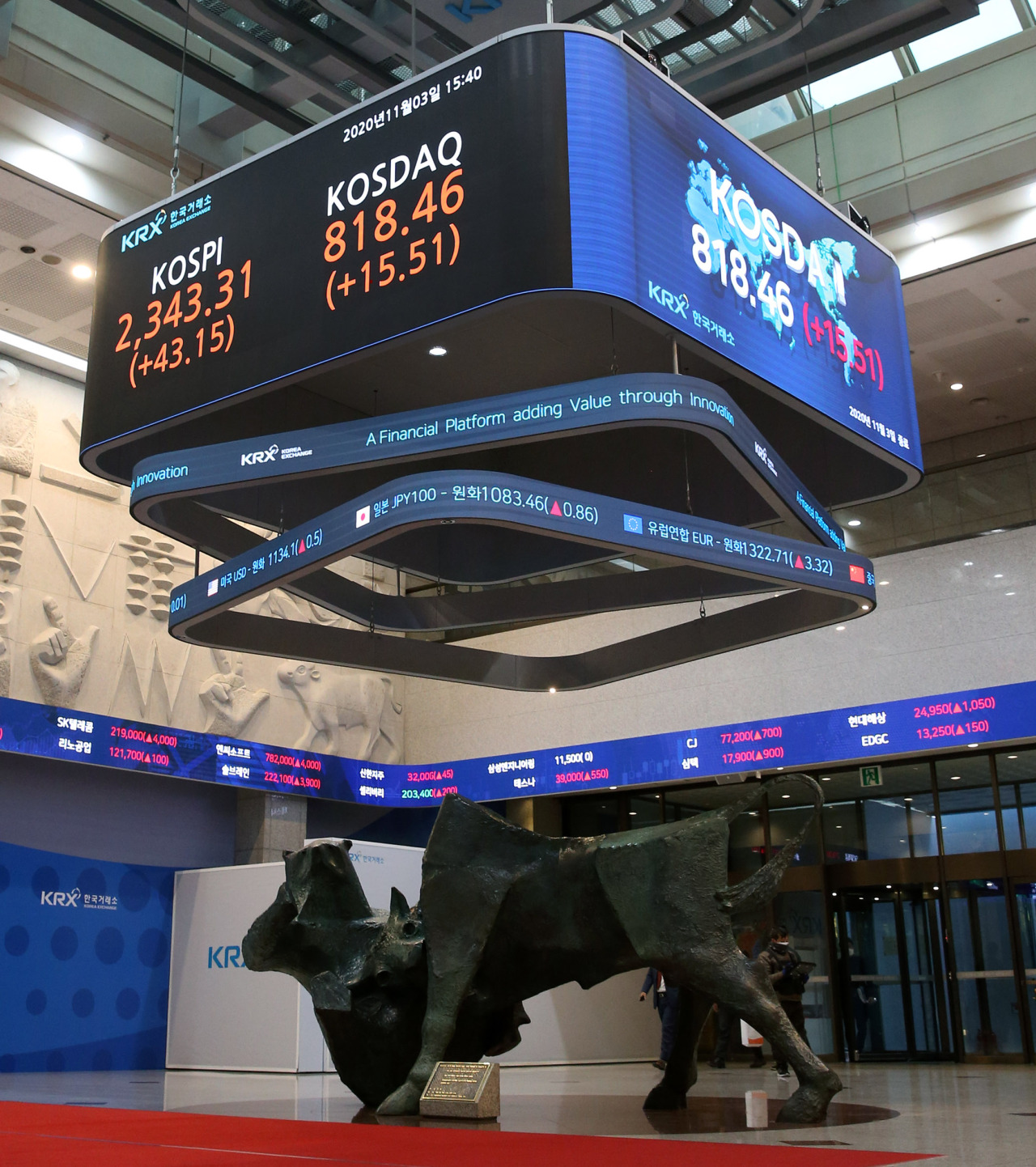 An electric board at the Korea Exchange shows the closing of the Kospi and Kosdaq on Tuesday. (Korea Exchange)
South Korean stocks rallied Tuesday on hopes the shares will advance after an apparently imminent US presidential election result. The local currency closed at 1,134.1 won against the US dollar, down 0.5 won from the previous session’s close.

Foreign and institutional investors scooped up 208.1 billion won ($183.4 million) and 455.1 billion won, respectively, from the main bourse. However, retail investors continued to sell shares for the second consecutive session, dumping 655.7 billion won on the market.

The tech-heavy Kosdaq started off at 810.01 and reached 818.46 at the closing bell, rising 15.51 points, or 1.93 percent, from a day earlier, as both foreigners and institutional investors hoisted the index by a combined net purchase of stocks worth about 141.2 billion won in the market.

Major stock market indexes tracked overnight gains on Wall Street amid the US presidential election uncertainty. Tuesday is Election Day in the US, with the main event being the incumbent President Donald Trump against former Vice President Joe Biden.

Ahead of Election Day, local shares had experienced a roller-coaster ride, but they reduced the amount in offloading recently as some investors started purchasing shares, thinking major indexes around the globe had fallen too far, market watchers said.

While poll results have showed Biden with a clear advantage over Trump, market volatility is likely to expand even after the election, with political uncertainties such as a protest by one of the candidates or delayed vote counts due to the large portion of mail-in ballots amid the continued pandemic.

“Since there is a high possibility that President Donald Trump will reject the final result, the upcoming indexes may show a similar pattern to that following the 2000 election, rather than the 2016 one,” said Seo Sang-young, an analyst at Kiwoom Securities, adding that the Kospi and Kosdaq plummeted over 8 percent and 16 percent, respectively, 20 years ago.

Kim Sung-keun, an analyst at Korea Investment & Securities, said that a “Blue Wave” -- a clean Democratic sweep of the presidency, House of Representatives and Senate -- is the most positive scenario for the market for now, in which case the Korean won is likely to grow strongly against the greenback.