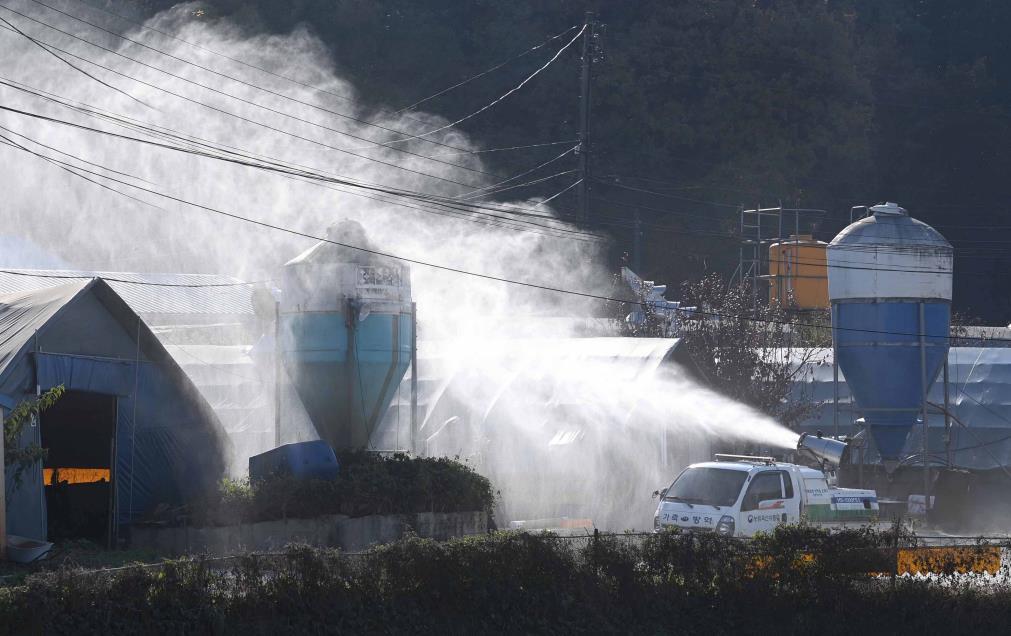 The first case was reported on Oct. 25 in Cheonan, South Chungcheong Province, and was soon followed by another discovery of the contagious H5N8 strain in Yongin, Gyeonggi Province.

The discoveries prompted the Agriculture Ministry and local governments to step up quarantine and biosecurity measures to block a bird flu outbreak among domestic poultry.

Intertwined with the bird migration season, the officials fear this may be a harbinger of another mass outbreak in the country. Last time it happened, over 6.5 million chickens, ducks and quails were culled.

“This is a very alarming situation,” said Vice Agriculture Minister Lee Jae-ouk in a press briefing on Oct. 26, a day after the first case was reported in Cheonan.

“There has been a pattern of poultry farms reporting the highly pathogenic avian influenza outbreak soon after cases among migrant birds,” he said.

The virus can spread via infected birds’ body fluids or feces to other birds or animals of other species. There are two strains of the virus -- high or low pathogenic viruses.

It is harder to control than any other pathogens because it is difficult to track and control the movement of birds. Scientists have pointed to migratory birds as potential virus carriers.

Throughout this year, more than 640 cases of the severe virus strain were discovered in 40 countries, and experts have warned that the virus would eventually reach Korea this winter.

According to the National Institute of Biological Resources, 575,000 migrant birds of 176 species arrived in Korea in October and more are to come as winter deepens. The total number of migrant birds could be above 1 million throughout this winter, it says.

Since bird flu was first reported in Korea in 2003, the virus has frequently been transmitted from migrant birds to farmed poultry.

In Korea’s last battle against the disease that spanned from November 2017 to February 2018, 6.54 million poultry chickens, ducks and quails from 140 farms were killed in response to outbreaks at 22 farms raising 1.33 million poultry.

While bird flu cases have been discovered in Korea since then, all of the cases were verified as low-severity strains.

The mass culling and following public fears then seriously disrupted the demand for and supply of poultry products like chicken and eggs during the outbreak. Korea had to import eggs from nearby countries to meet the demand for “safer” eggs and stabilize egg prices.

With that in mind, the government last week upgraded its response level to the highest “serious,” going all out to prevent an outbreak among commercial flocks.

The Environment Ministry’s teams are currently inspecting 46 major migrant bird habitats throughout the country and collecting samples to track the virus’s spread.

Local governments such as Cheonan have started using laser pointers to deter migrant birds from reaching nearby poultry farms, and ministries are attaching trackers to wild birds in danger areas to disinfect places they reach.

The Agriculture Ministry said it is working on action plans, should the virus spread to farmed poultry.