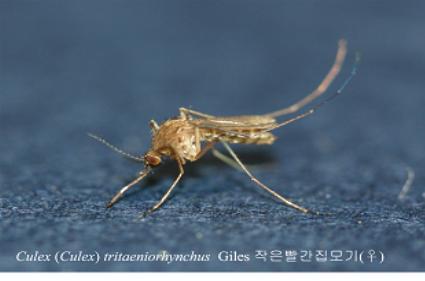 Mosquito responsible for JEV transmission (Ministry of Health and Welfare website)
South Korea on Thursday reported one confirmed case and two suspected cases of the Japanese encephalitis, all three of them in Gyeonggi Province.

According to the Korea Disease Control and Prevention Agency, a woman in her 60s was diagnosed with the mosquito-borne disease on Wednesday. The two suspected patients are a woman in her 70s and a man in his 50s.

All three started exhibiting symptoms such as fever and disorientation last month, the agency said.

Among patients infected with the virus, only about 1 in 250 experience symptoms, the agency’s data shows. But as many as 20-30 percent of symptomatic cases can be fatal, and some might suffer permanent neuropsychiatric complications. The incubation period is typically between 4 to 14 days.

The agency recommends vaccination for people living near areas where the disease is most commonly found such as rice paddies or pig farms, and those planning to travel to JEV-endemic countries. Babies and children are universally urged to get vaccinated per the national immunization schedule.

In Korea, the majority of cases are discovered between August and November. This year’s warning for the disease was issued on July 23.

Of the 217 cases reported in the last 10 years, over 90 percent were patients in their 40s or older. There were only two cases in children under 19 years old.