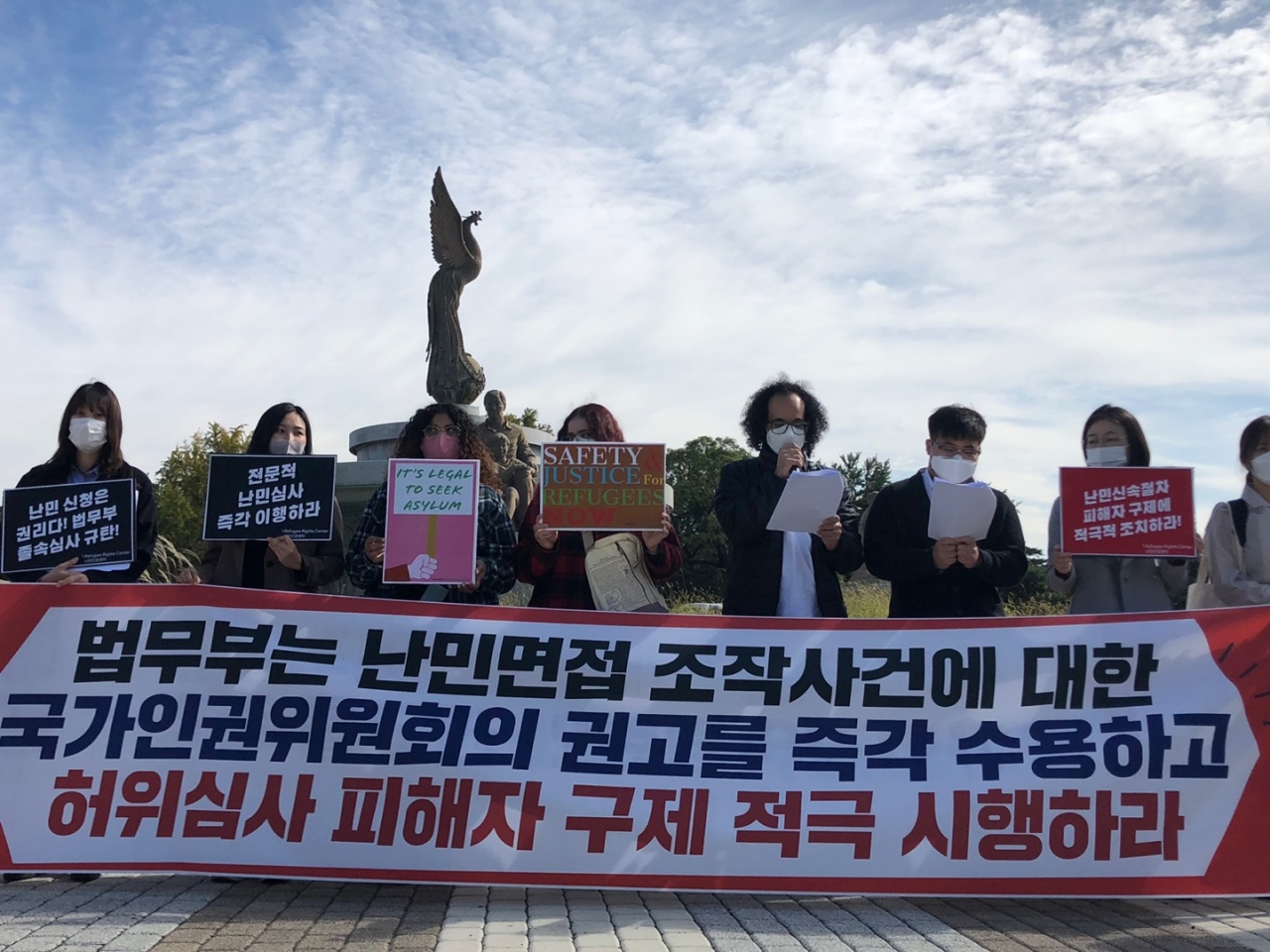 Human rights organizations call on the Ministry of Justice to come up with ways to ensure fairness and transparency in refugee screening processes at a press conference neat the presidential office, Thursday. (Ock Hyun-ju/The Korea Herald)
When he applied for refugee status in 2016, Darwish Musab, a human rights campaigner and photojournalist from Egypt, said in his asylum interview that he was at risk of political persecution at home and had fled to South Korea in search of protection.

But some time later, he found out there was something suspicious about his interview.

“In the written record of the interview, I was quoted as saying I used to work at a construction site, came to Korea to find work and I would go back to Egypt after making a lot of money, which I never said,” said Musab.

Sensing “systematic efforts” by Korean authorities to deny asylum, he officially took issue with the fabricated testimonies and was finally granted refugee status in 2018.

According to the commission‘s findings released Thursday, testimony by asylum-seekers in refugee application interviews had been falsified, mistranslated, recorded inaccurately or even omitted from documents by immigration officials to make them look like economic migrants. Economic migrants are not eligible for refugee protection under the international refugee convention.

The commission said that the responsibility lay not only with the officers, but also with the Ministry of Justice, which pressed the officers to handle too many cases too quickly and failed to take due measures to ensure a fair and transparent process.

As asylum applications continued to increase, the Ministry of Justice created a “speedy refugee screening system” in November 2014. It was intended to shorten the screening process, which usually took months, to less than a week.

According to the rights body’s findings, the ministry had nine immigration officers handling some 1,917 refugee applications at that time.

A year later, in September 2015, the ministry increased the proportion of cases to be covered by the fast-track system and set a minimum quota for how many cases an immigration officer should handle in a month.

The panel said an estimated 2,000 asylum-seekers from Arab countries may have been deprived of a chance for a fair review of their refugee applications between September 2015 and June 2018, the period during which the Justice Ministry has identified cases of forgery.

Applicants from certain countries may have been targeted more frequently. Some 94.4 percent of the Egyptian applicants went through the speedy refugee screening system in 2016, much higher than the 69 percent of all applicants screened through the accelerated process that year.

Admitting to the procedural flaws, the ministry granted all affected applicants another chance to apply for refugee status, but as of August this year only 701 of the approximately 2,000 eligible applicants had done so.

The ministry also imposed penalties on three of the officers involved in the asylum interviews last year.

Concluding that the ministry “abused” the speedy screening system, the human rights commission called on it to come up with ways to ensure fairness and transparency in the refugee screening process. Among its recommendations were mandatory recording of asylum interviews, allowing applicants to review and copy their interview records, and better training and education for officers in charge of screening refugee claimants.

The ministry said it will review the recommendations and draw up a plan accordingly, adding that it has already hired more specialized personnel, made it compulsory to record asylum interviews and initiated a training program for those handling refugee applications.

“The speedy refugee screening system largely served as a tool to reject refugee applications based on prejudice that applicants were abusing the refugee law for economic opportunities,” said Lee Il, a human rights lawyer for Advocates for Public Interest Law, denouncing the ministry for processing refugee applications from the perspective of controlling borders rather than protecting human rights.

Lee added that he fears the speedy refugee screening system may be applied more broadly if the Refugee Act is revised in accordance with changes proposed by the ministry.