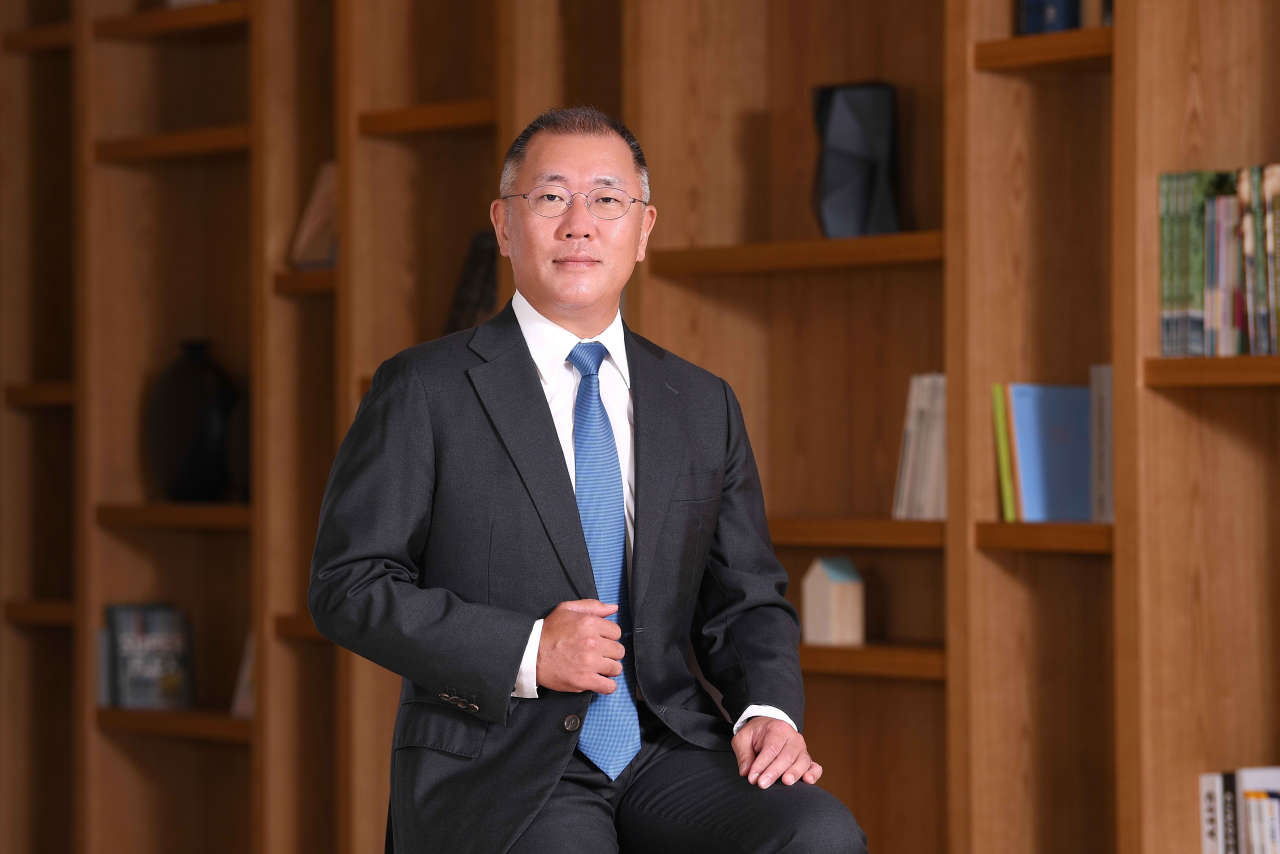 The group said Hyundai Motor, Kia Motors and Hyundai Mobis had held an extraordinary board meeting in the morning and unanimously approved Chung’s appointment as chairman.

His father -- outgoing Chairman Chung Mong-koo, under whose leadership Hyundai Motor Group has grown into the world’s fifth-largest automaker -- will serve as honorary chairman.

In a video inauguration message to executives and employees of the group around the world, new Chairman Chung Euisun presented his vision of group innovation, stressing “humanity” multiple times as the focal essence of future endeavors.

“Hyundai Motor Group aims to become a company cherished for realizing humanity’s dream of safe and free movement and a peaceful life, as well as sharing its fruits with customers around the world.

“All of our goals and efforts must be customer-centric. The first step to customer happiness is to enable them to focus on their own lives through perfect quality of our products and services. We must listen to the diverse voices of our customers, communicating and considering tirelessly,” he added.

Chung Euisun had long been expected to take over his father’s role.

He truly stepped to the fore in 2018, when he took control of management as executive vice chairman. In March this year, he became the chairman of Hyundai Motor’s board of directors.

In heralding the auto giant’s new generation, Chung Euisun laid out his vision for the group’s future.

“First, we will realize diverse eco-friendly mobility solutions through our electric vehicles. Our EVs will be safe to use for our customers, and will be equipped with world-leading performance capabilities and value. Ultimately, they will foster healthy lives and environments for our customers.”

He went on to emphasize demand for the “free movement and prosperity of humanity,” pledging that Hyundai would develop “the world’s most innovative and reliable autonomous driving technology.”

“Our world-class hydrogen fuel cell technology will be used not only in automobiles, but also in various fields, as an eco-friendly energy solution for the future of humanity.”

He added that innovations in robotics, urban air mobility, smart cities and other areas would improve people’s lives.

In his message, Chung Euisun also reached out to the shareholders, saying, “We will actively communicate with the market to increase shareholder value, and fulfill social responsibility for our business partners, various neighbors in society and future generations.”

Chung Euisun’s vision, abridged in his inauguration speech, has been shared in diverse presentations, projects and deals during his tenure as executive vice chairman.

When he was president of Kia Motors, Chung Euisun’s design management approach resulted in a surplus for Kia. As vice chairman of Hyundai Motor, he led growth in the face of the global financial crisis and the European financial crisis, and launched the luxury car brand Genesis.

Chung Mong-koo, as the new honorary chairman of the group, is known as the Korean entrepreneur who led the development of the nation’s automobile industry. During the Asian financial crisis, when Korean automakers faced a severe setback, he acquired Kia Motors and revived and nurtured it as a global automaker.