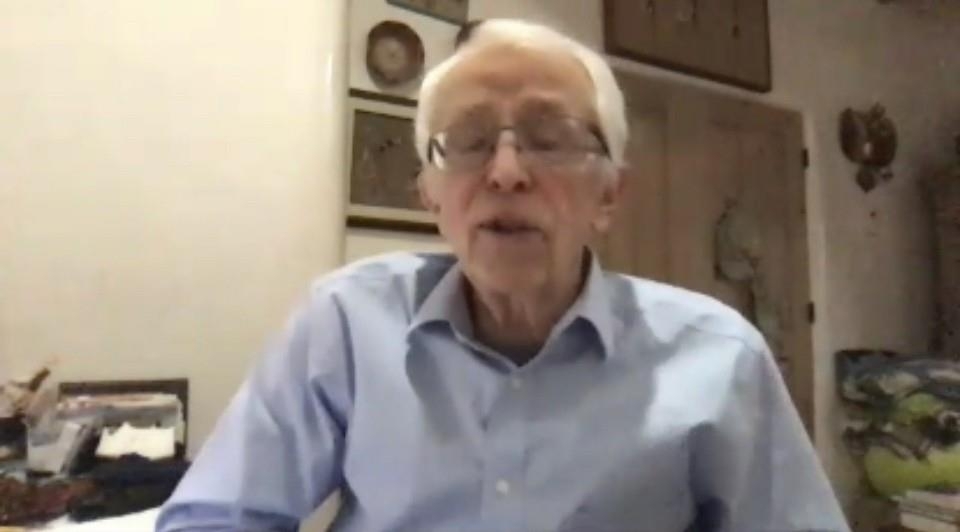 In the captured image, US nuclear expert Siegfried Hecker is seen speaking in a virtual seminar jointly hosted by the Seoul-based East Asia Foundation and Asia-Pacific Leadership Network for Nuclear Non-proliferation and Disarmament on Oct. 6, 2020. (Yonhap)
WASHINGTON -- US President Donald Trump missed a "golden" chance to end North Korea's nuclear program by walking out of his Hanoi summit with Kim Jong-un empty-handed when the North Korean leader had, in effect, offered to give up a key nuclear facility, a US nuclear scientist claimed.

Siegfried Hecker noted the North Korean leader had offered to shut down his country's "Nuclear Weapons Institute" prior to his second summit with Trump in Hanoi in February 2019, which he said was equivalent to giving up its nuclear weapons program itself.

"(Kim) actually specifically mentions in the letter, the nuclear weapons institute," the professor emeritus at Stanford University said in a webinar hosted by the East Asia Foundation and Asia-Pacific Leadership Network for Nuclear Non-proliferation and Disarmament, both based in Seoul.

The American nuclear expert was referring to Kim's letter to Trump, dated Sept. 6, 2018, whose content was revealed in a recently published book, "Rage," by Washington Post journalist Bob Woodward, along with 27 other letters exchanged between Kim and Trump.

"We are willing to take further meaningful steps one at a time in a phased manner, such as the complete shutdown of the Nuclear Weapons Institute or the Satellite Launch District and the irreversible closure of the nuclear materials production facility,"

Kim wrote in the letter, according to the book.

Hecker said he was not completely sure what the Nuclear Weapons Institute was, but likened it to the United States' Los Alamos National Laboratory that designs nuclear weapons. He insisted the shutdown of such an institute would have rendered North Korea's existing nuclear weapons useless.

"You still have bombs out there, but the bombs are no good without the scientists that designed them," he told the virtual seminar.

"That was an incredible offer. You combine that with Hanoi, and all I can say is we missed a golden opportunity," added Hecker, who is said to be one of the well-versed experts on North Korea through his seven visits to the communist state's nuclear facilities in Yongbyon and Pyongyang between 2004 and 2010.

Trump walked out of the Hanoi summit without a deal.

In his book, Woodward quotes Trump as calling on Kim to give up all five nuclear facilities that the US knew about at the time, while the North Korean leader was willing to give up just one at Yongbyon.

Hecker reiterated his long-held argument that North Korea's denuclearization process cannot but be a phased process, saying "no single piece of paper" or "single guarantee" will ever make Kim give up his nuclear weapons.

"I can see this being done in a step by step process that actually would have a chance to eventually get them to the point where Kim Jong-un decides he's better off without the weapons," he said.

Tuesday's seminar was inspired by a controversial phrase in Woodward's book where the author talks about the United States' response to a North Korean attack that he said "could include the use of 80 nuclear weapons."

Hecker dismissed the notion of North Korea's use of 80 nuclear weapons as "nonsense," saying the communist country simply does not have nearly as many nuclear weapons nor the means to deliver them to the US mainland.

"North Koreans may have enough of the bomb fuel for roughly 40-45 nuclear devices. They can't get to 80," he said.

"North Koreans have also now demonstrated, particularly in 2017, that they can make missiles that are long range, that potentially could reach the United States," Hecker said. "But in my opinion they have not yet done enough tests, enough tests with the proper flight path, to actually have a militarily useful ICBM." (Yonhap)