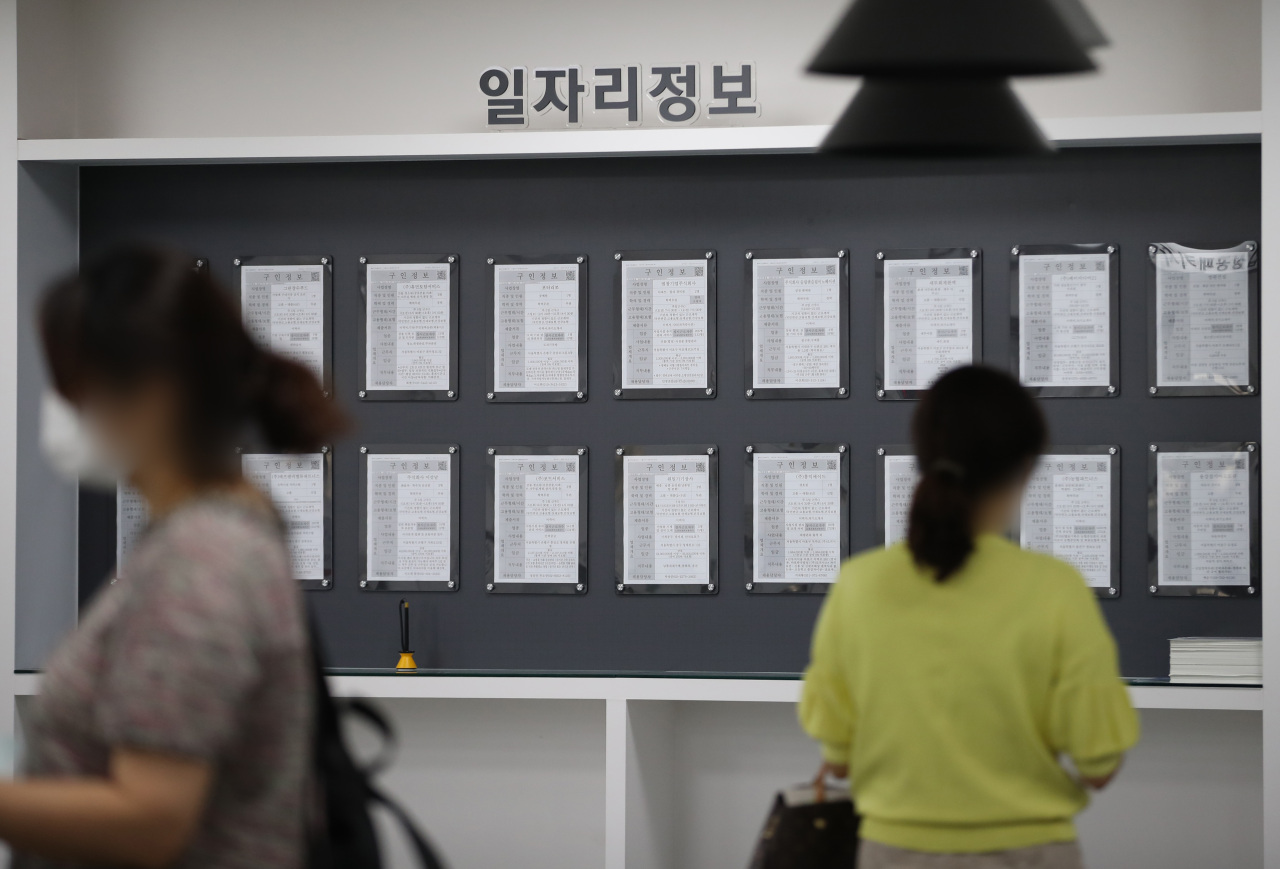 Job seekers read recruiting notices at an employment support center in Mapo-gu, western Seoul. The number of those that gave up finding a job reached 680,000, the largest-ever recorded since data was compiled, with young adults in their 20s and 30s accounting for half. (Yonhap)
As the COVID-19 pandemic continues into two consecutive recruiting seasons, the competition among young job seekers is getting fiercer.

While new openings remain markedly fewer than before, colleges continue to churn out fresh graduates. Moreover, large companies are moving away from open recruitment, which provided prospective applicants with equal and easy access to information about new openings and the application process.

According to a survey of the 500 largest companies in South Korea by revenue from the Korea Economic Research Institute earlier this month, 74.2 percent of the companies said they were not hiring or had yet to finalize recruiting plans for the second half.

Another survey by job portal Incruit found that 41.1 percent of 530 listed companies planned to shift to on-call hiring this fall, instead of open recruitment. Some 39.6 percent said they would stick to the practice of mass open hiring.

Twenty-six-year-old college graduate Park Seung-gi (not his real name) feels anxious about the tough outlook for the job market in the second half, fearing further delays in his life and career.

He is among many trying to gain employment in public entities, which under the government’s policy are pressed to hire just as many entry-level employees as in the past and through the same open and transparent process. Even before COVID-19, public enterprises were generally preferred by job seekers in Korea for the benefits and job security.

“I already know so many around me who are preparing to apply for jobs in the public sector. I don’t know if I really have a chance to win in this race,” said Park, who majored in materials science at Kookmin University.

“This is my first try on the job market, so everything is so uncertain, but I have set my eyes low so that I find a job wherever possible.”

Public enterprises started putting up recruitment notices earlier this month, and applications are coming in constantly. While no official data has been compiled, competition is expected to be at least as fierce as it was in the first half.

Korea Western Power, the first public company to launch its regular recruitment drive this year, received 8,268 applicants for 74 positions in its spring recruitment period. The Korea Railroad Corp., which was looking to hire 850 new workers in the first half, received 42,539 applications.

Kim Jin-soo (not his real name), who graduated from Hanyang University in Seoul this August, is desperate to land a full-time job this fall.

He now spends most of his time outside of his three-month internship sharpening his resume and writing cover letters hoping to win a full-time gig at a big corporation. His desperation comes from the widespread notion in the labor market here that the longer a job seeker stays unemployed, the less attractive he or she seems to recruiters.

“It feels like there are too many applicants for just a very small number of open positions. Maybe I won’t even get an interview,” Kim said.

“But I need to get something done this year to fill another line on my resume. It’s definitely going to be more difficult for me to land a job when I get older.”

The labor market for entry-level workers is in its worst shape in recent years right now and it is likely to get even worse going forward, experts say. More and more students are on track to graduate and enter the job market, but companies are limited in how many they can hire, which means opportunities for young job seekers are diminishing with each season.

Korea’s jobless rate rose 0.1 percentage point on-year to 3.1 percent in August, with the country losing about 274,000 jobs. The unemployment rate for those aged between 15 and 29 rose 0.5 percentage point from a year earlier to 7.7 percent.

The number of employed people in Korea has fallen for six consecutive months, marking the longest downfall since an eight-month decline in 2009 during the global financial crisis.

“The job market for young adults is moving into the worst situation ever from companies’ deteriorating hiring capacity from poor performance coupled with shrinking room for new workers due to rigidity of employment,” said Choo Kwang-ho, head of KERI’s economic policy team, in a report.

Experts like Choo believe that the Korean labor market should be more flexible and allow companies to more freely hire and fire workers. Because dismissals and layoffs are difficult, companies tend to refrain from adding to their workforce in uncertain times, they argue.

“It is important to provide vitality to the private sector and prompt companies to make more quality jobs with measures like regulatory relief,” he said.

“At the same time, the core of resolving the job crisis among young adults is cutting the cost of companies hiring new workers by allowing more flexibility in employment and cutting the general labor cost.”