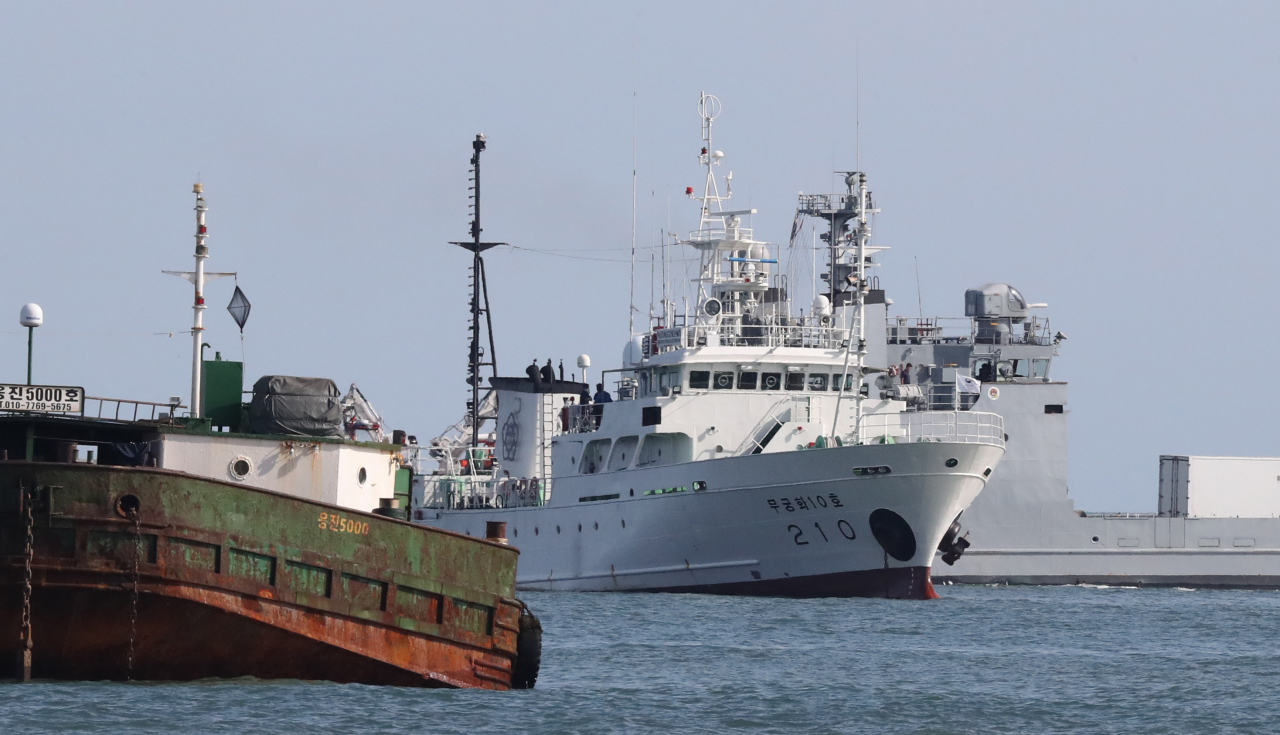 A South Korean official, who was shot dead by North Korean troops, was on board the patrol boat Mugunghwa 10 before gone missing earlier this week. (Yonhap)
South Korea demanded Thursday that North Korea explain the killing of a South Korean fisheries official in the North’s waters, strongly condemning the act as “inhumane.”

North Korean soldiers shot dead a 47-year-old official affiliated with Seoul’s Ministry of Oceans and Fisheries, who appeared to have been trying to defect to the North via sea, the military confirmed in Seoul. North Korean soldiers then burned his dead body, it added.

Pyongyang had neither admitted nor denied the killing as of press time.

Moon had also ordered the military to strengthen its defense posture and maintain readiness to secure the lives and safety of its nationals.

Cheong Wa Dae denounced the killing as an “inhumane act,” urging the North to reveal the full truth behind the incident and assume sole responsibility.

“The North Korean military’s shooting of an unarmed South Korean civilian with no intention to resist and damaging his body cannot be justified in any reason,” Suh Choo-suk, deputy director of the national security office who doubles as chief of the secretariat of the National Security Council, said after the emergency NSC meeting.

Condemning it as an “act against international norms and humanitarianism,” Suh demanded the North apologize for its inhumane act and take clear measures to prevent the recurrence of such an incident.

Suh also warned that the government will firmly respond to any North Korean act that threatens the lives and security of South Korean people.

The fisheries official disappeared Monday afternoon while on duty aboard a patrol vessel in waters off the western border island of Yeonpyeongdo, the Defense Ministry said. He appeared to have drifted into North Korean waters, crossing the Northern Limit Line, the de facto inter-Korean maritime border, before being discovered by North Korean officials.

“After analyzing intelligence, we have confirmed that North Korea has committed this atrocious act of shooting a South Korean and burning his dead body,” the ministry said earlier in the morning.

Officials from the Joint Chiefs of Staff said it is highly likely the missing official was attempting to defect when he jumped off the patrol vessel Monday, considering that he was wearing a life jacket, left his shoes behind on the vessel and was using an unidentified flotation device when discovered by the North Korean soldiers.

The man was found at around 3:30 p.m. on Tuesday by North Korean officials, who were wearing protective equipment and questioned him from a distance while leaving him in the water. At this time, the man appears to have expressed his desire to defect, according to a military official, citing intelligence.

Later in the evening, North Korean soldiers shot the man following an “order from a superior,” and poured oil over the dead body to set it aflame. The South Korean military’s surveillance equipment set up on the island detected the flames at around 10:11 p.m. Tuesday.

The military lodged a complaint with the North on Wednesday via the United Nations Command communication line, but Pyongyang has not responded.

Seoul authorities said an investigation is underway into the motives behind the alleged defection.

Local media reports say the man, who has two children, had recently divorced and was suffering financial problems.

The killing of a South Korean national is expected to stoke tensions between the two Koreas amid a deadlock in nuclear negotiations between the US and North Korea. Tensions escalated in June when the North blew up an inter-Korean liaison office within its territory to protest civilian groups from the South sending anti-Pyongyang leaflets across the border.

The Unification Ministry in charge of inter-Korean affairs also lodged a strong protest against Pyongyang, saying the inhumane act “pours cold water” over Seoul’s consistent efforts and patience for reconciliation and peace between the two Koreas.

It is the first time North Korea has killed a civilian from the South in North Korea since July 2008. At that time, 53-year-old tourist Park Wang-ja was shot dead by a North Korean soldier at the North’s mountain resort Kumgangsan when she purportedly entered a military area restricted to civilians.