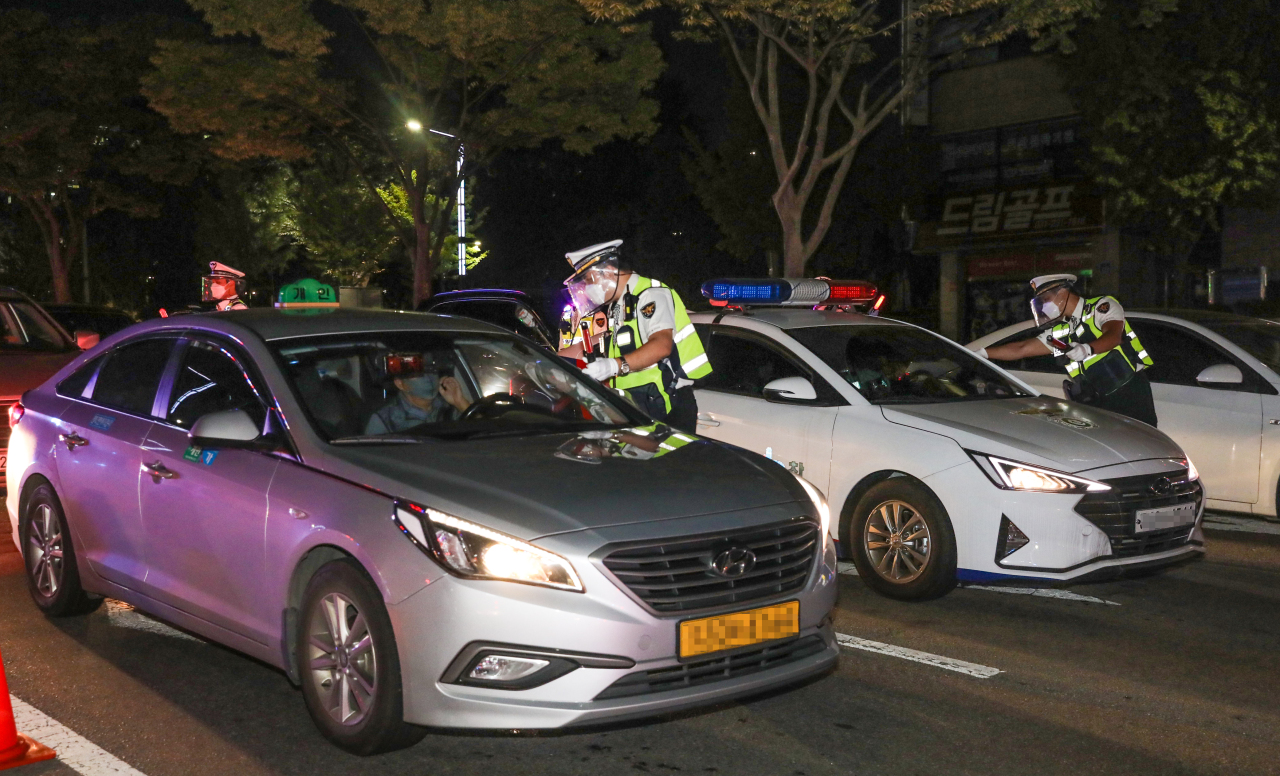 The Korean National Police Agency said Sunday they will run a special crackdown period on driving under influence of alcohol until Nov. 17, as violations continue amid the COVID-19 outbreak.

All police stations will run at least two DUI checkpoints every week and will also operate surprise DUI checks in areas with high frequency of violations, officials said.

There appears to be a wrong perception among some members of the public that the coronavirus is preventing police from DUI crackdowns, they said.

The move came after two recent fatal DUI crashes angered the public, with many calling for strengthened police crackdowns and punishment for drunken driving violations.

On Sept. 6, a drunk driver in his 50s drove a car straight into a light pole in Seoul, which fell and fatally struck a 6-year-old waiting for his mother to come back from a fast food restaurant.

Days earlier, a 33-year-old drunk driver in Incheon drove a Mercedes-Benz into a 54-year-old on a motorcycle making their last fried chicken delivery of the day. The injured motorcycle driver was immediately taken to a nearby hospital but was pronounced dead soon after arriving.

The coronavirus outbreak did affect the police’s crackdown on drunk driving in the first few months of the pandemic, as conventional DUI testing requires drivers to directly blow into breathalyzers, a practice that can easily spread the pathogen.

But since May, police have employed a new, non-contact testing device that detects airborne alcohol content from around 30 centimeters in front of drivers’ face, officials said.

Preliminary data released by the police shows that the number of traffic accidents caused by drunk driving from January to August rose 15.6 percent from the same period a year earlier. Police are preparing to announce more detailed statistics later.

For 7 weeks until Sept. 7, police recorded 16,899 cases of drunken driving, 0.2 percent higher than the same period last year. Fatalities related to drunken driving reached 34 during the same 7-week period, down 5.5 percent from 36 people a year earlier.

In Korea, a drunken driving accident that results in death is punishable by at least three years in jail to a life sentence. A driver‘s license is suspended when blood alcohol concentration is 0.03 percent or higher, and the license is revoked when the level is 0.08 percent or higher.

The penalties were toughened under the Yoon Chang-ho Act, which was named after a DUI victim and came into effect in June 2019. Previously, the corresponding levels were 0.05 percent and 0.1 percent, respectively.

The strengthened blood alcohol level standards has led to 15,487 driver’s licenses being suspended from when it went into effect until the end of last month. During the same time, 17,810 licenses were revoked.

But, some argue that the punishments are still too lax and don’t effectively prevent drunk people from going behind the wheel. To make real change, not only drunk drivers but those who overlook or allow their drunk companions to drive should also be held legally accountable, they say.

On Thursday, Rep. Kim Tae-nyeon, floor leader of the ruling Democratic Party, said the party will push for a bill to step up punishment for passengers of drunk drivers.

“It is saddening to know that even with the Yoon Chang-ho Act in effect, drunk driving continues,” he said during a party meeting. “We will see to the problem and take due measures.”

The public is in support of the idea, a recent poll shows. In a Realmeter survey last week on a total of 500 people aged 18 or above, over 83 percent expressed support for heavier punishment of passengers abetting drunk driving.