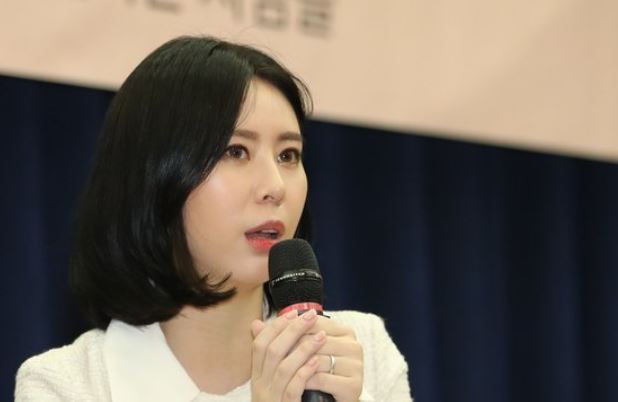 Yoon Ji-oh, an actor who has been engulfed in donation fraud and defamation allegations related to late actress Jang Ja-yeon, denied the Justice Ministry’s statement that the investigation against her had been suspended because her location was unknown.

The Korean-Canadian has been in Canada since April last year, after several lawsuits were filed against her including damage suits filed by those who made donations to her. The donations were in support of Yoon‘s decision to come forward as a witness to the high-profile sexual abuse and corruption scandal surrounding Jang.

The plaintiffs accused Yoon of having made either false or exaggerated testimonies as well as using the donations for private purposes.

Controversy over Yoon rekindled here after the Ministry of Justice said the Seoul Central District Prosecutors’ Office put a hold on Yoon’s cases as her whereabouts were unknown on May 11.

According to the ministry’s response to an inquiry from Rep. Cho Su-jin of the main opposition People Power Party, Yoon has been put on the wanted list as her location has been unknown since she left the country.

“We have taken related procedures such as seeking to arrest her through Interpol, and we are in the process of securing her whereabouts by using the criminal justice coordination system with Canada,” it said.

On a post on her Instagram account in which Yoon shared a picture of herself at a birthday party, she said she has been staying with her family under the protection of Canadian police. She tagged the location where she took the picture -- a rooftop restaurant of a hotel in Toronto.

“My whereabouts are unknown? I have been living in my house that you know the address of,” she said.

Yoon asserted that Korean police initially rejected a request from Canada for cooperation on her cases and later requested an Interpol Red Notice for her, which she believes an excessive measure for allegations she faces.

“I learned the fact that my passport was nullified through news reports, not through police. I reported such actions (taken by Korean police) to Canada and they provide protection for me.”

Yoon is accused of damaging the legacy of a late actress Jang Ja-yeon, who took her own life in March 2009 after leaving a note that accused her agent of forcing her to attend parties and provide sexual favors to high-profile figures in the entertainment and media industries.