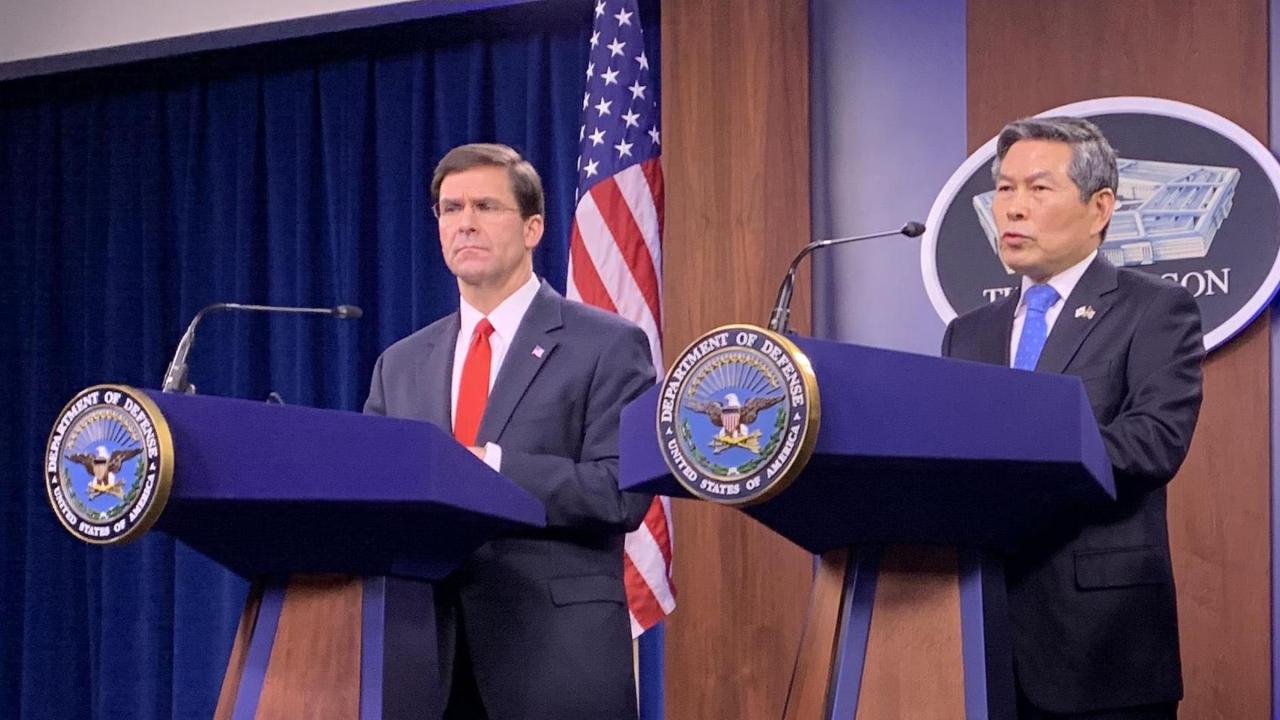 (Yonhap)
WASHINGTON -- US Secretary of Defense Mark Esper on Wednesday reiterated the need to build a collective security alliance in the Indo-Pacific region, insisting his country must focus more on multilateral cooperation than one-on-one alliances.

Speaking in a seminar organized by US think tank RAND Corporation, the US defense chief said the country's bilateral alliances with countries in the Indo-Pacific, including South Korea, provide a valuable, cost-free asset to deter conflict with China or Russia.

"What I think is one of the biggest advantages we have that does impose costs on countries such as Russia and China is our robust network of alliances and partnerships.They have nearly none and we have many," Esper said in the seminar broadcast online.

"So there's too much one-on-one, too much US-Australia, too much, I shouldn't say too much but we're very good when it comes to the bilateral -- US-Japan, US-Korea, US-Australia, etc," he said. "We need to start doing more where it's multiple countries."

His remark follows a recent series of remarks from other US officials, including Secretary of State Mike Pompeo, highlighting the need to build a NATO-like collective structure in the Indo-Pacific.

The US initiative in the Indo-Pacific currently involves three other countries -- Australia, Japan and India -- that together with the US form the so-called Quad.

Esper said the US will continue to push and expand the Quad.

"I think the more we can multilateralize the relationships in this theater, the better," he told the seminar, also offering NATO as a good example of collective security and cooperation among allies and partners.

"I think the more we can move in that direction. the stronger we are," he added.

South Korea, a key US ally, has reportedly been asked to join what the US now calls the Quad Plus.

"The purpose here can be to create a critical mass around the shared values and interests of those parties in a manner that attracts more countries in the Indo-Pacific and even from around the world," Pompeo said earlier, naming South Korea among others as countries partnering with the U.S. to push back what he called China's aggression in every front.

Seoul apparently remains reluctant, saying its alliance with the US is the key to its security but that its economic ties with China may also be a key to its survival.

"An alliance means that it is the basis of our diplomacy, security. However, while we are a US ally, we are very closely located and have very close economic relations with China at the same time," South Korea's Vice Foreign Minister Choi Jong-kun has said. (Yonhap)