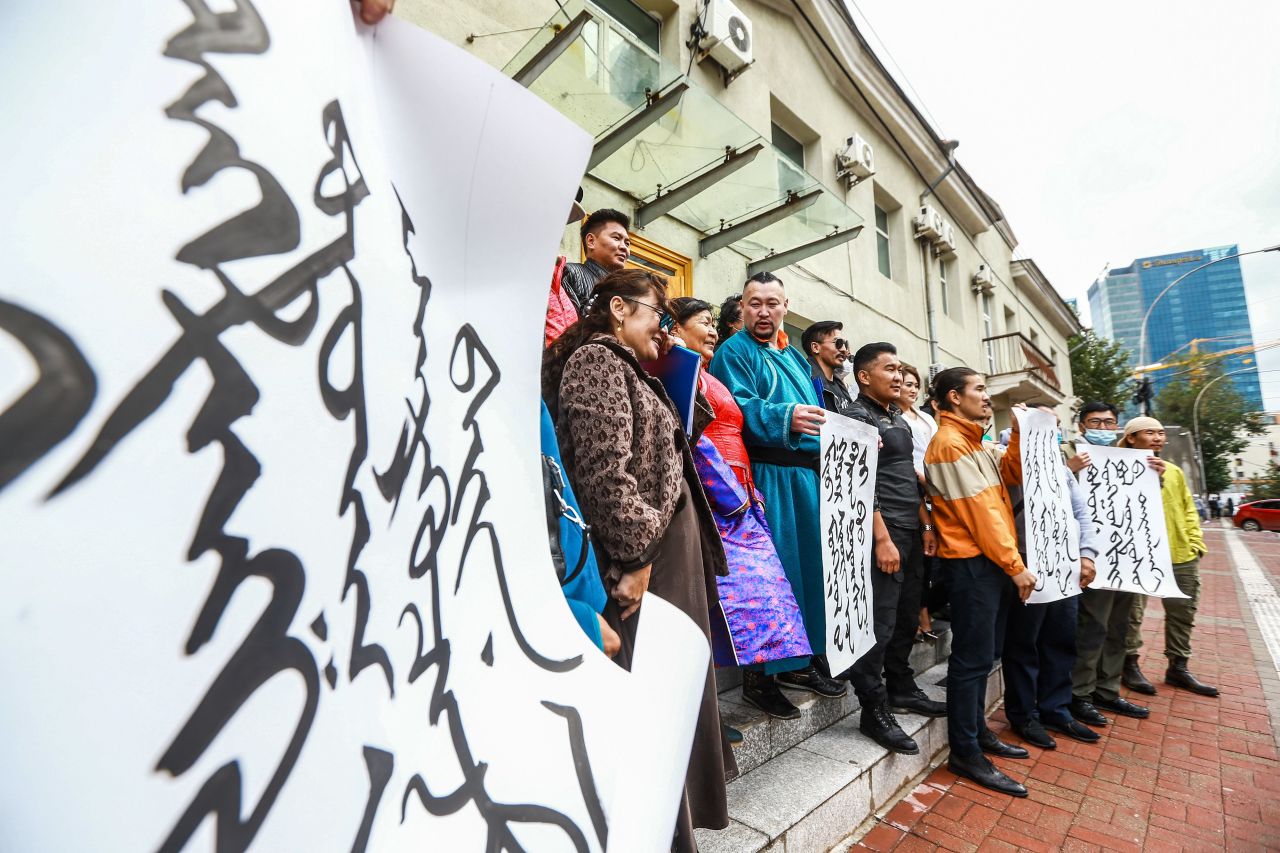 Mongolians protest at the Ministry of Foreign Affairs in Ulaanbaatar, the capital of Mongolia, against China's plan to introduce Mandarin-only classes at schools in the neighbouring Chinese province of Inner Mongolia on Aug. 31. (AFP-Yonhap)
BEIJING (AFP) -- Tens of thousands of people in an ethnic Mongolian region of northern China have joined rare protests and school boycotts against a new curriculum they fear will wipe out their minority culture, residents said Tuesday.

The sudden policy change in Inner Mongolia means all ethnic minority schools in the remote region will now be required to teach core subjects in Mandarin rather than Mongolian, echoing similar moves in Tibet and Xinjiang to assimilate local minorities into the dominant Han Chinese population.

"Almost every Mongolian in Inner Mongolia is opposed to the revised curriculum," a 32-year-old herder from the Xilingol League area surnamed Hu told AFP, warning Mongolian children were losing fluency in their mother tongue.

"In a few decades, a minority language will be on the verge of extinction."

Tensions flared across the vast grassland region bordering Mongolia and Russia after the policy was announced by the Inner Mongolia Education Bureau last Wednesday.

Mass demonstrations involving parents, students and ordinary citizens have erupted across the region, according to video clips provided by residents to AFP, while thousands of students have boycotted classes.

In some clips, scores of uniformed students can be heard shouting in

Mongolian: "I swear to death that I will always learn my mother tongue."

"There are at least tens of thousands of people protesting across Inner Mongolia," said Baatar, a 27-year-old herder in the Hinggan League area who refused to give his name because of security concerns.

As of Tuesday, several bilingual boarding schools in Hinggan League and nearby Tongliao city were surrounded by hundreds of paramilitary police to prevent children who were already enrolled from leaving, Baatar added.

Several parents were beaten and arrested by police late Monday during a demonstration outside his sister's school in Horqin Right Front Banner, Baatar said.

Locals said parents also faced widespread pressure from police to send their children to school, with pupils threatened with expulsion if they did not attend.

The area is home to more than four million ethnic Mongolians -- around 16 percent of the region's population.

"Parents are refusing to send their children to schools that use Chinese as the only language of instruction," he said.

WeChat messages and photos of petitions against the policy written in the traditional vertical Mongolian script have been mass-censored by authorities in recent days, he added.

The Inner Mongolia Education Bureau did not respond to faxed requests for comment.

It claimed in a Monday post that the number of Mongolian-language teaching hours remained unchanged.

It is the only region left in the world that uses the traditional Mongolian script, as neighbouring Mongolia adopted the Cyrillic alphabet under Soviet influence.

For decades, the region's bilingual curriculum for ethnic minority schools offered a full range of subjects taught in Mongolian, as well as Mandarin, English and Korean classes.

Herder Hu said that he and many other ethnic Mongolians had become fluent in Mandarin while preserving their native language.

On Monday, dozens protested in the Mongolian capital Ulaanbaatar against the Chinese policy, while thousands of Mongolians campaigned online in solidarity with their neighbours. (AFP)