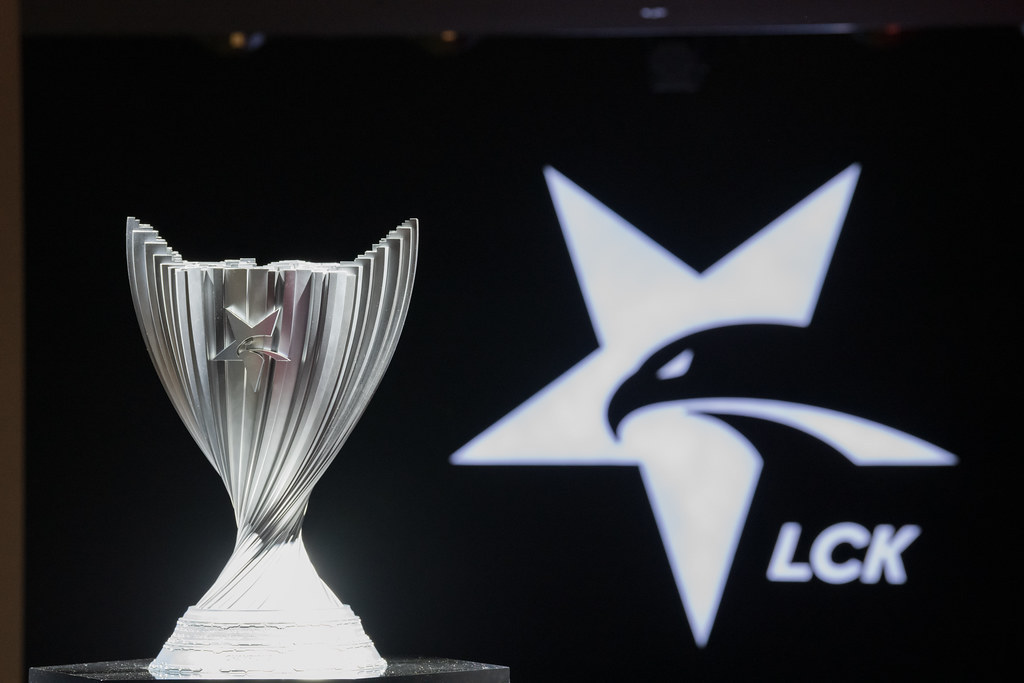 The LoL Champions Korea trophy displays the LCK logo, at LoL Park in Jongno, Seoul. (Riot Games)
Riot Games Korea on Friday announced the 10 preferred bidders for negotiating for LoL Champions Korea franchises next year, along with five teams that have the next priority, should negotiations with any of the 10 teams fail.

“We considered not just the financial status of the 10 teams that were selected, but also their ownership, team management capabilities and their business models,” said Riot Games on Friday.

The only current LCK team that failed to be selected as a preferred bidder was SeolHaeOne Prince, which fell in last place in the LCK summer season. Absolute Power Esports, which manages SeolHaeOne Prince, formed a partnership with the Pittsburgh Knights, an esports organization managed under NFL’s Pittsburgh Steelers, on Aug. 20 to qualify for the franchise system. With an investment by Sehun of K-pop group EXO in SeolHaeOne as well, it seemed to have a good chance to be awarded the franchise despite the poor performance in the summer season.

However, hyFresh Blade managed to grab the coveted spot after forming a naming partnership with hyFresh, aka Korea Yakult, and receiving investment from many celebrities, including K-pop group Super Junior’s Kim Hee-chul, Olympic shooting gold medalist Jin Jong-oh and baseball player Park Yong-taek, among others.

Riot Games also finalized its decision to have just 10 teams in the LCK next year.

“We discussed in depth whether to increase the number of teams, but the most important thing about the franchise system was creating a stable foundation of participating teams,” said Riot Games. “If the market grows and the league sees a steady increase in sales, we will actively consider increasing the number to 12.”

The preferred bidders will enter into negotiations starting from Sept. 9. If negotiations fail for any of the 10 teams, five teams -- SeolHaeOne, Element Mystic, Jin Air Greenwings, Awesome Spear and OZ Gaming -- will be given the opportunity to negotiate in that order.

The final teams to form LCK franchises will be announced in late October.