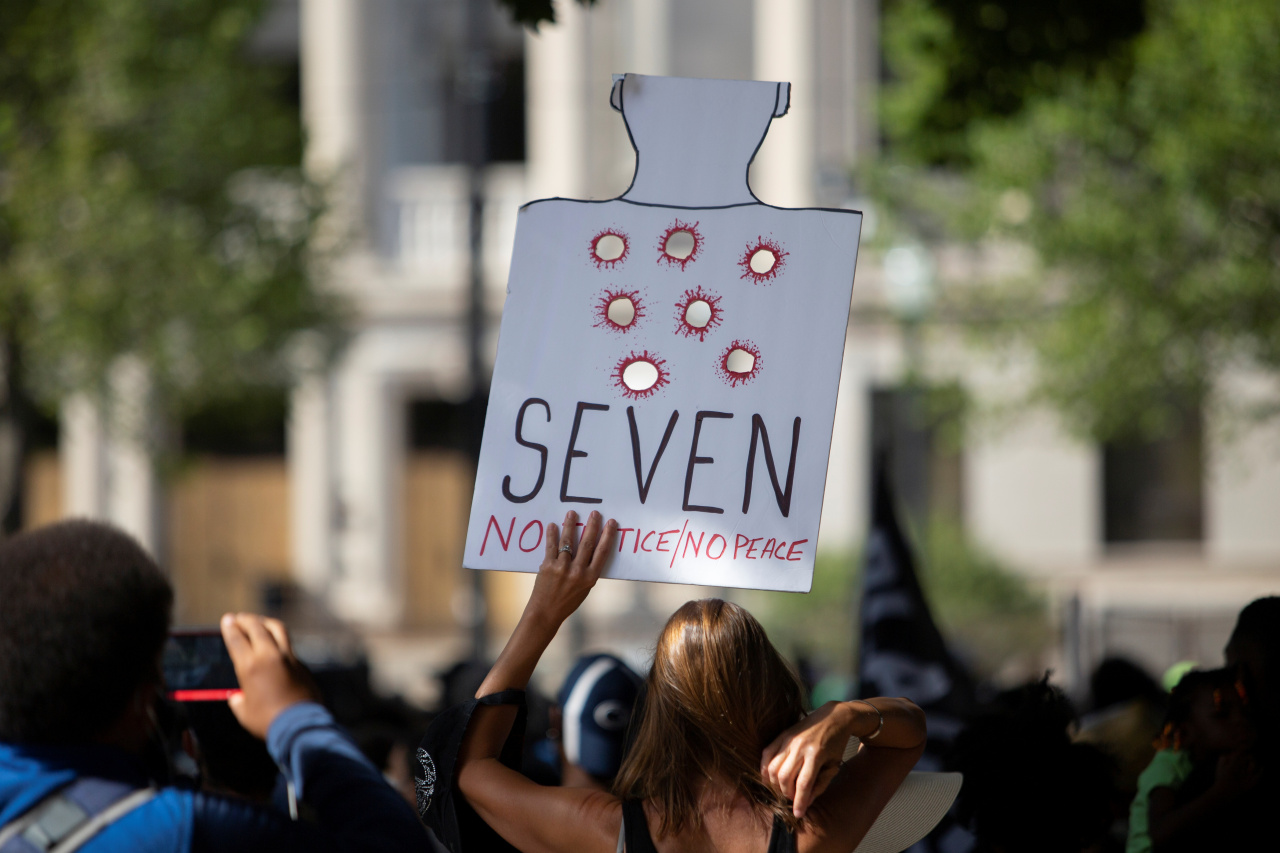 (Reuters-Yonhap)
KENOSHA (AP) -- With chants of "One person, one vote!" and "No justice, no peace!" a crowd of about 1,000 demonstrators gathered outside a Wisconsin courthouse Saturday to denounce police violence and share messages of change, a week after an officer shot Jacob Blake in the back and left the 29-year-old Black man paralyzed.

The diverse group of protesters also chanted "Seven bullets, seven days!" -- a reference to the number of times Blake was shot last Sunday -- as they marched toward the courthouse in Kenosha. There, Blake's father, Jacob Blake Sr., gave an impassioned call for changing a system he described as fostering police brutality and racial inequities.

Kenosha Police Officer Rusten Sheskey and two other officers were responding to a domestic abuse call last Sunday when Sheskey shot Blake in the back. Blake Sr. told reporters on Saturday that his son is heavily sedated, but he has regained consciousness.

"He's in a lot of pain," he said. "I just wish I could pick my baby up and make it all right." He called for Sheskey to be charged and for the other two officers at the scene to be fired.

Several of Saturday's speakers encouraged the crowd to vote for change in November, and to push for changing legislation in Wisconsin that would lead to police reform.

"Justice is a bare minimum," Lt. Gov. Mandela Barnes said. "Justice should be guaranteed to everybody in this country."

Blake Sr. asked those at the rally to raise their fists with him. "We are not going to stop going in the right direction. We're going to the top ... we're gonna make legislation happen because that's the only thing that they recognize," he said.

Blake Sr. also referred to the May 25 death of George Floyd, a handcuffed Black man who died after a Minneapolis officer pressed his knee into Floyd's neck. Said Blake Sr., "We all have a knee on the back of our necks, every day."

One of Blake's sisters, Letetra Widman, said she felt recharged "to stand up not just for Jacob, but for all the people who have not gotten justice."

Captured on cellphone video, the shooting sparked new protests against racial injustice and police brutality months after Floyd's death touched off a wider reckoning on race.

Protesters have marched in Kenosha every night since Blake's shooting, with some protests devolving into unrest with damage to buildings and vehicles. On Tuesday, two people were killed by an armed civilian. The commander of the National Guard said Friday that more than 1,000 Guard members had been deployed to help keep the peace, with more on the way.

Most people dispersed from the protest on Saturday before a 7 p.m. curfew. More than an hour after curfew, law enforcement officers, including some wearing US Marshals Service identification, surrounded about a dozen people gathered outside of the Kenosha County Courthouse and made several arrests.

President Donald Trump will visit Kenosha on Tuesday to meet with law enforcement and survey damage from recent demonstrations that turned violent, White House spokesman Judd Deere told reporters traveling with the president Saturday night. Trump, who toured hurricane-ravaged areas of Louisiana and Texas earlier Saturday, had told reporters that he "probably" would visit the city.

Asked to weigh in on Tuesday's shootings in which 17-year-old Kyle Rittenhouse was charged, Trump demurred and said "it's under investigation" and that "we are looking at it very, very carefully."

Aniyah Ervin, a 16-year-old from Kenosha who is Black, said Saturday that the week has been surreal. Although she protested against racial injustice over the summer, she said there had been a feeling that police brutality was not a problem in Kenosha. But, she said, Blake's shooting "shows it can happen anywhere."

Will Turner, who is Black, said he brought his two children from Madison for the march to "show them the power of peaceful protesting."

Investigators have said little about what led to Blake's shooting. The Kenosha police union said Blake had a knife and fought with officers, putting one of them in a headlock as two efforts to stun him with a Taser were unsuccessful. State investigators have said only that officers found a knife on the floor of the car.

In the cellphone video recorded by a bystander, Blake walks from the sidewalk around the front of an SUV to his driver-side door as officers follow him with their guns drawn and shout at him. As Blake opens the door and leans into the SUV, an officer grabs his shirt from behind and opens fire. Three of Blake's children were in the vehicle.

The man who recorded the video, 22-year-old Raysean White, said he heard police yell at Blake, "Drop the knife! Drop the knife!" before gunfire erupted. White said he didn't see a knife in Blake's hands. (AP)