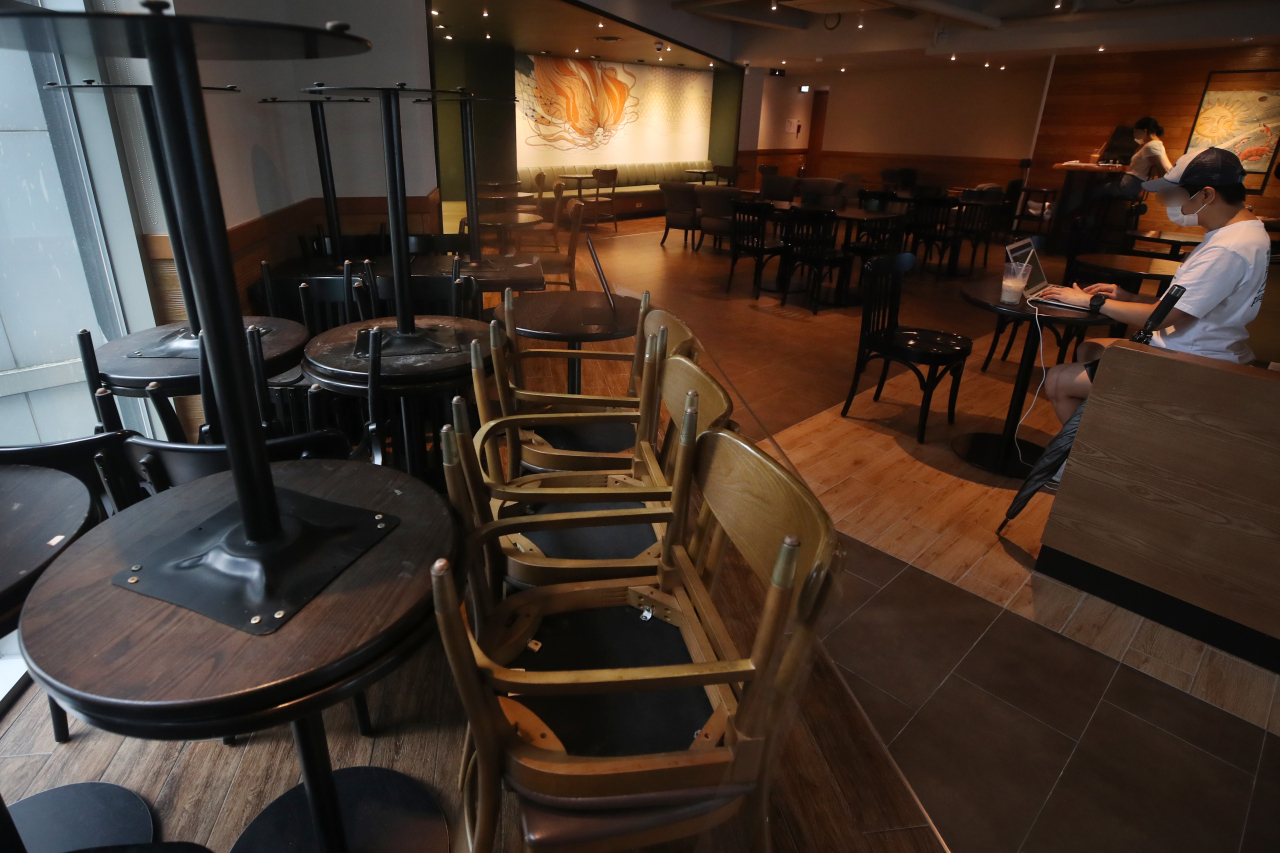 Unused tables and chairs are piled up inside a cafe on Friday. (Yonhap)
The government announced stricter social distancing measures Friday to ban food and drink consumption inside of cafes and restaurants in the Seoul metropolitan areas next week in efforts to curb the rapid spread of COVID-19.

While the government had considered raising the social distancing rules to the highest Level 3 from the current Level 2 to stem the rapid spread of COVID-19, it decided instead to extend Level 2 measures for another week, with heightened rules.

Starting from Sunday, eating and drinking inside coffee chains in Seoul, Incheon and Gyeonggi Province will be banned for one week, until Sept. 9, the Ministry of Health and Welfare said.

Restaurants, including pubs and bakeries, will be allowed to operate until 9 p.m. Only takeout and delivery orders are permitted from 9 p.m. to 5 a.m. the next day.

About 380,000 restaurants and bakeries, 63,000 cram schools and 28,000 indoor facilities are expected to be affected by the new rules for the next eight days.

According to Starbucks Korea, the largest coffee chain by revenue, about 900 of its stores in the Seoul metropolitan area will be affected, facing an inevitable drop in sales.

Ediya Coffee, which has the most locations, said 1,618 shops will be affected. Holding an emergency meeting on Friday, the coffee chain said it will follow the government rules and wait for a further decision to come on Sept. 9.

“Damage will be inevitable, but it is an urgent situation, so companies and customers would have to cooperate and follow the rules to quell the situation,” a coffee franchise official told The Korea Herald.

The country reported 371 new COVID-19 cases Friday, of which 359 were locally transmitted, bringing the total caseload to 19,077, according to the Korea Centers for Disease Control and Prevention.

Level 3 social distancing rules would constitute a de facto lockdown, banning gatherings of 10 or more people, with in-person classes suspended. Public facilities would be ordered to close, while all sports events are prohibited.

“We are at a critical time where if we fail to quell the spread (of COVID-19) now, we will have to face an unwanted reality,” Health Minster Park Neung-hoo said as he made the announcement.

While there are calls for the government to put in place Level 3 social distancing rules, the government said it has left the choice as the “last card” due to the immense impact on society and the economy.

”We are prepared to raise social distancing to Level 3 at any time, but did not decide this time, as it can incur great damage to everyday life and the economy,“ Park said. ”Taking in various opinions, we concluded that (Level 3) would be our last card.”