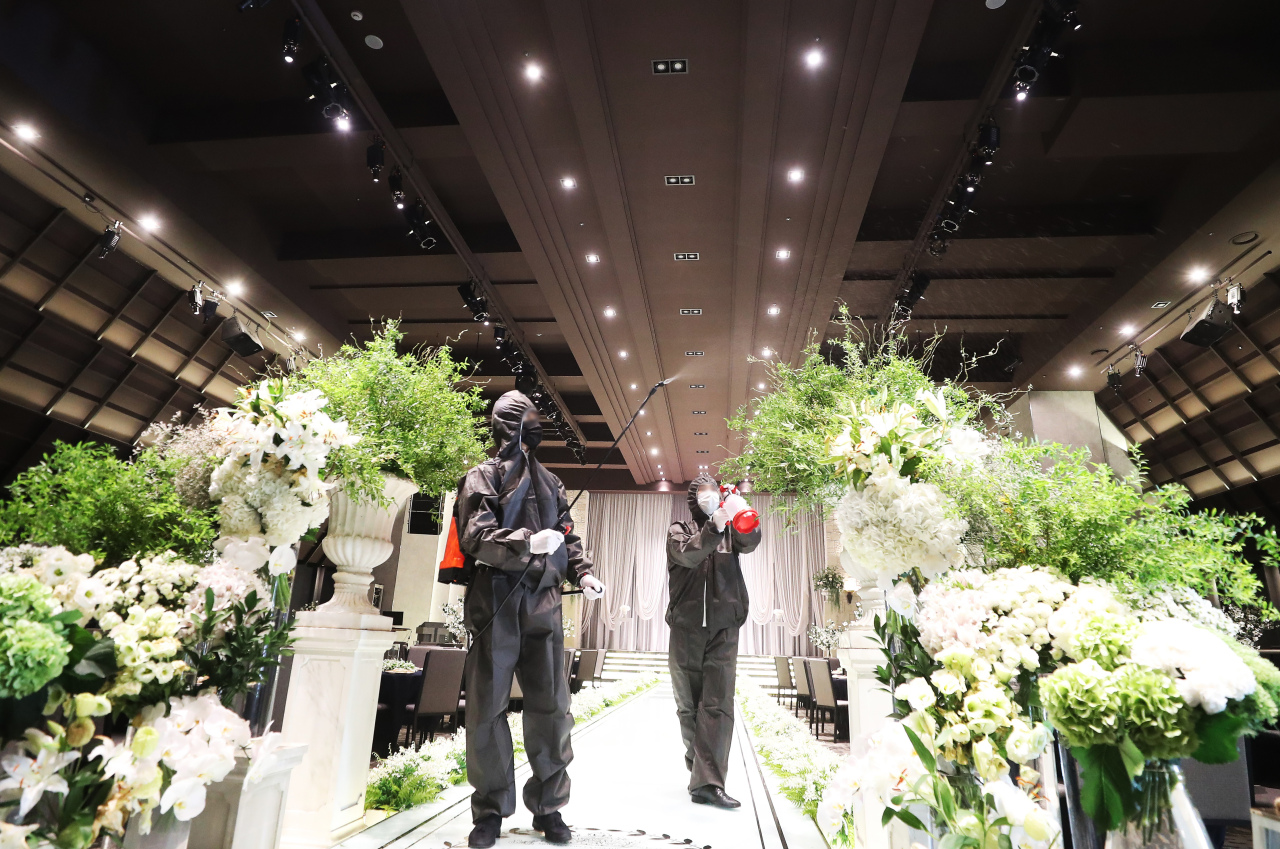 Workers disinfect a wedding venue in Suwon, Gyeonggi Province, on Aug. 19. (Yonhap)
Without a doubt, 2020 has not been a great year to hold events. Some events, however, cannot easily be canceled or postponed.

Like most other countries, weddings are big business in Korea, and celebrations are typically planned out at least a year in advance.

People often travel across the country to attend, and guests are tightly packed in during a ceremony, which is followed by a reception that often involves buffet stations.

With the government imposing stringent health measures to curb the spread of COVID-19, wedding ceremonies in Korea are under close scrutiny.

Limits on crowd size and specific guidelines are causing widespread confusion for those preparing for their big day. 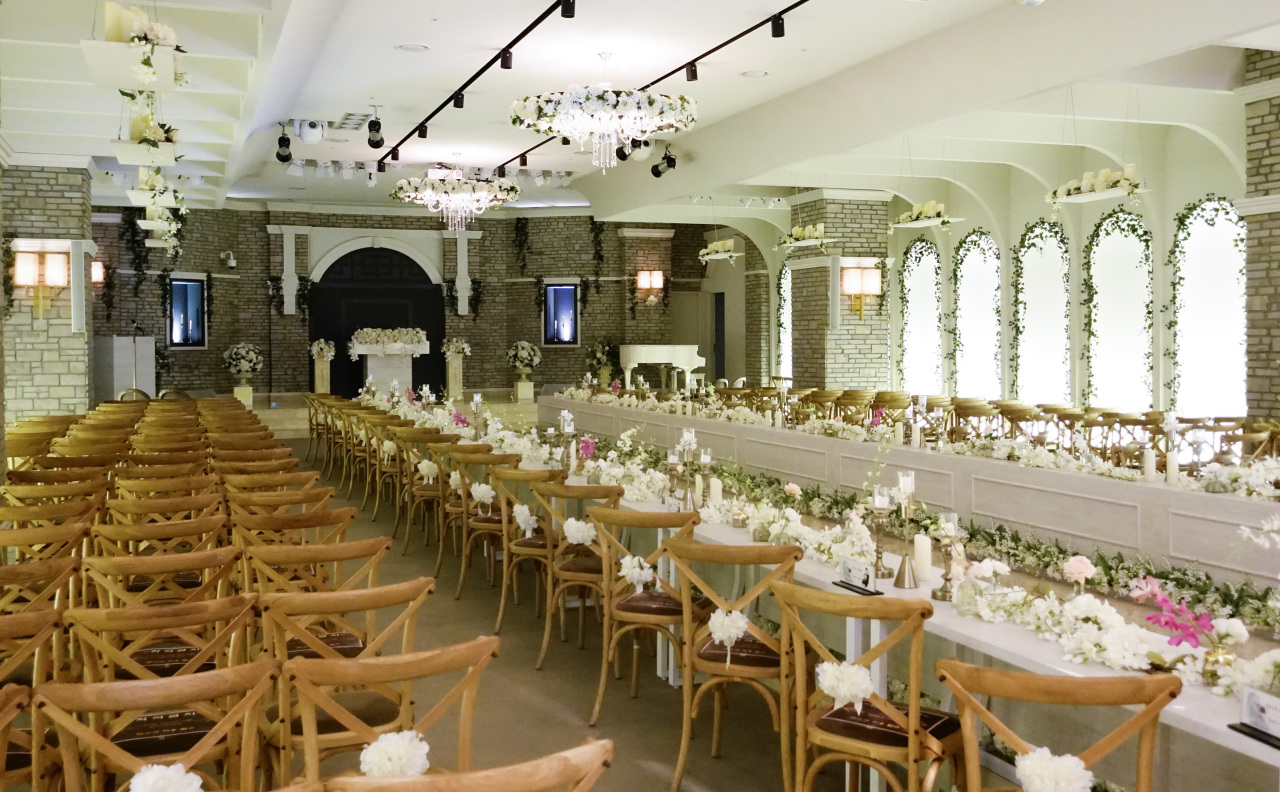 A wedding venue in Seoul is empty on Aug. 22, the first weekend after the government strengthened social distancing guidelines in the Greater Seoul area. (Yonhap)

Under the Level 2 social distancing rules, gatherings of 50 or more people indoors and of 100 or more people outdoors are restricted, which means weddings cannot be held in the usual way. With the government requiring wedding venues to comply with the guidelines, conflicts between the venue operators and couples are deepening.

Most wedding halls require a certain “minimum guaranteed guests.” The number depends on the venue, time slot and date. This number refers to the minimum number of meals a couple will be required to pay for as part of the wedding reception.

Wedding halls in Seoul often require couples to sign a contract for at least 200 guests. Under the contract, couples have to pay for the meals of those 200 guests, whether all 200 dine at the venue or not. If the number of people who actually dine exceeds the agreed upon number by more than 10 percent, there may not be sufficient food to go around.

Though strengthened social distancing guidelines mandate wedding halls restrict the guests to 50 per wedding, some wedding venues are refusing to reduce the number.

Some couples have taken the issue to the Blue House petition board, pleading that wedding halls be made to drop their minimum guarantee for now.

The Korea Fair Trade Commission has stepped in, suggesting a federation of wedding halls allow the postponement of ceremonies without extra charges for six months, and to temporarily suspend their minimum guaranteed guest policy.

Wedding halls have likewise taken to the Blue House petition board, insisting the minimum guest requirement is needed for them to pay their employees and meet rent.

Compounding the confusion of couples are the varying guidelines issued by regional governments.

Though the Level 2 social distancing plan was enforced on Aug. 16, and was strengthened on Aug. 19, the KCDC announced the specific guidelines on wedding ceremonies on Aug. 23.

Before the announcement, each regional government imposed different guidelines on weddings, causing confusion for couples and wedding halls.

According to KCDC guidelines, the bride, groom and their families are counted among the 50 persons allowed, but wedding hall staff are not. Everyone at the wedding venue has to wear masks at all times -- except for the bride and groom when they enter or leave the wedding hall and during the photo shoots. Others have to wear masks during the photo shoots. Also, when taking photos each attendee should be 1 meter apart from one another. It is recommended that meals be replaced with gifts. However, if meals have to be served, under 50 people can dine 1 to 2 meters apart from each other.

If the guidelines are not followed, those who were present at the wedding may be fined up to 3 million won ($2,500) each.

“Even for us, everything is so confusing. Direct guidelines are not given, but responsibilities are heavy,” a wedding venue employee said. “We are sorry that weddings have turned into nightmares for brides and grooms.”

Those who are going forward with their wedding plans are coming up with creative ways to cope with the situation.

Some are preparing their weddings in two parts of one hour each. Kim Ji-eun, 29, an office worker in Seoul, is one of them. The first part of her wedding in early September will be held with the presence of extended family, while the second part will be attended by the couple‘s close friends and colleagues.

Kim had to pay more for the wedding venue in central Seoul to make the arrangements. But the additional charge was relatively small compared to the charges that would be incurred if she postponed or canceled the wedding.

Kim already made reservations for her wedding dress, photographers, video recording staff and more, which would all charge her for a change of date. And though her wedding venue was offering to delay her wedding without an additional charge until February, all the “golden times” had already been taken.

“I just want to get it over with. After all, married life is important, not the wedding itself,” Kim said. “Even if we postpone the wedding to winter, we cannot be sure that this would not happen again. I cannot take chances anymore.”

Some are taking their weddings online, livestreaming the ceremony for guests unable to attend the wedding due to the heavy restrictions.

“I livestreamed my wedding via Instagram,” an online user who said she held her wedding over the prior weekend wrote on an online wedding community website. “My friends and my extended family who could not come watched the livestream and left messages congratulating me on my marriage.”

“I felt like an influencer and was surprised that many watched the livestream,” the bride wrote. “Of course, it was sad that we could not have all of our loved ones at the wedding. But at times like this, we cannot compromise anyone’s health.”