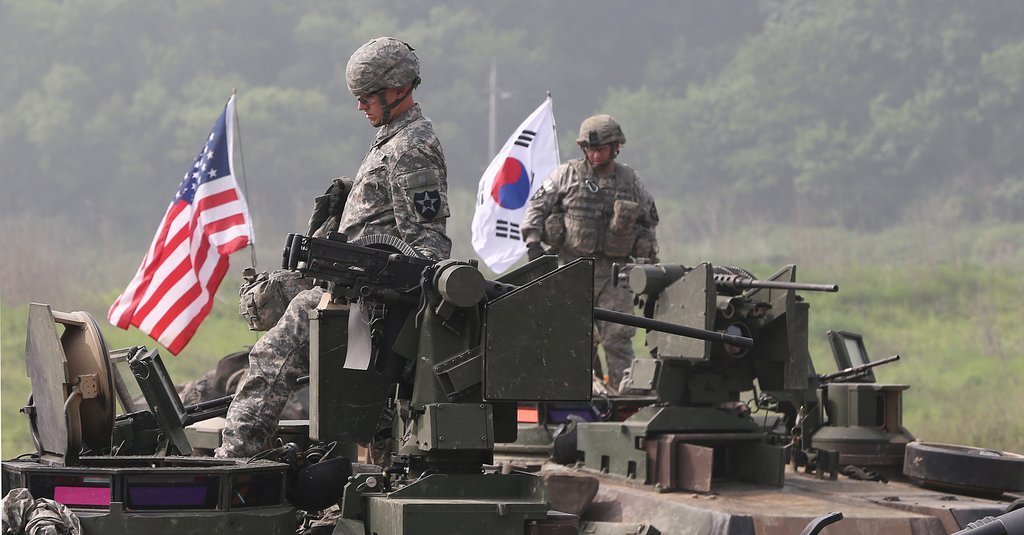 Joint military exercise (Yonhap)
South Korea and the US are set to kick off their annual summertime combined military exercises on Tuesday, with drills to be reduced in scope due to the coronavirus pandemic.

The computer-simulated Combined Command Post Training will start Tuesday and run until Aug. 28, the Joint Chiefs of Staff said in a statement Sunday, while “comprehensively taking into consideration the COVID-19 situation.”

The joint exercise was initially scheduled to start Sunday, but the date was pushed back after a South Korean officer who was to take part was diagnosed with COVID-19 on Friday. The pandemic has also prevented a number of American soldiers from coming to South Korea for the drills.

The exercise will focus on the maintenance of the combined defense posture, according to the JCS. It will also “partly” entail a practice run on how the future combined command structure will operate after wartime operational control, which is currently held by the Americans, is returned to South Korea.

Due to the scaled-back nature of the upcoming drill, a Full Operational Capability test is not possible, which may postpone the planned transfer of wartime operational control, or OPCON, from Washington to Seoul.

Seoul has been aiming to complete the OPCON transfer by 2022 with plans to complete the Full Operational Capability test, the second step in a three-phase verification process, this year, and the final phase of Full Mission Capability next year.

The allies canceled their annual springtime drills in March due to the spread of the coronavirus. Seoul and Washington have also scaled down the exercises since 2018 as part of diplomatic efforts to engage North Korea, which perceives the joint exercise as a hostile act.

The upcoming drills involve preparing for an all-out war against North Korea. The first part runs Aug. 18 to 22 and will focus on a defense operation. The second part, centering on counterattacks, follows Aug. 24 to 28.