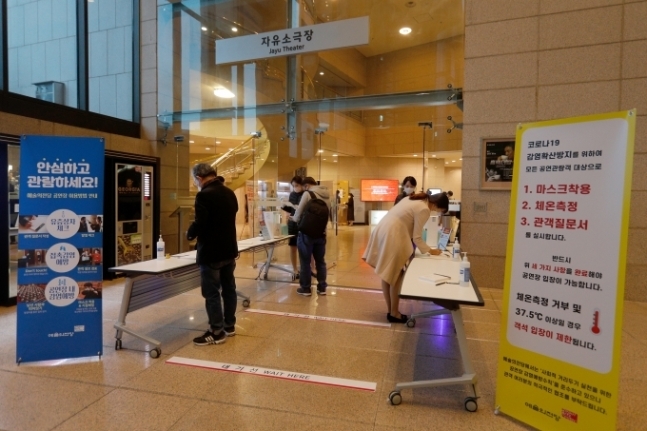 With the government having imposed stringent health measures to curb the spread of COVID-19 on Saturday, the culture sector is scrambling to adjust.

As transmission of the virus in the Seoul metropolitan area continues at a fast rate, the social distancing plan for the capital area was raised a notch to Level 2 on Saturday.

Musicals are offering ticket refunds without charging a commission.

The musical “Mozart!” -- staged at the Sejong Center for the Performing Arts in central Seoul -- is offering refunds till Sunday. Those who booked their tickets before Saturday can receive a 100 percent refund.

“Those who do not want to watch the musical can contact the customer service center of each online reservation platform,” EMK Musical Company said, adding that tickets can be refunded as late as two hours before the performance.

The musical “Rent,” running at D-Cube Arts Center in western Seoul, is offering refunds too. For audience members who could not cancel Sunday’s tickets, the production company, Seensee Company, is accepting cancellations by phone until Tuesday.

Other musicals -- including “Marie Curie” and “Murder Ballad” -- are offering commission-free cancellations too.

The Busan Philharmonic Orchestra’s performance on the first day of Classic Revolution 2020 Beethoven, a classical music festival organized by the Lotte Foundation for Arts, Monday, was canceled. The rest of the program for the inaugural music festival, originally scheduled to run Monday through Aug. 30 with performances by eight orchestras, has not been confirmed.

Christoph Poppen, the principal conductor of the Cologne Chamber Orchestra who took the helm as the artistic director of the music festival, recently completed his mandatory two-week quarantine in Korea.

“Though the Lotte Concert Hall wishes to proceed with the scheduled programs, if orchestras cannot perform due to government measures, their performances have to be canceled,” an official from the Lotte Foundation for Arts said.

The Seoul Arts Center, a state-funded performing arts center in southern Seoul, is stepping up measures to prevent the virus from spreading. Its in-house performances are canceled or postponed for two weeks.

For performances that have not been canceled, the center is limited to 50 percent of full capacity. According to its press release, it is currently notifying private arts companies that every other seat must be left empty during performances.

The center requires all audience members to wear masks at all times and register health information through QR code-based entry logs. It will deploy more contactless thermal imaging cameras to check the body temperature of all guests.

Meanwhile, due to the raised alert level, the government’s plans to distribute discount coupons worth 90.4 billion won ($76.2 million) have been put on hold.

The Ministry of Culture, Sports and Tourism was to distribute discount coupons for six sectors hit hard by the pandemic -- lodging, travel, concerts, exhibitions, cinema and sports -- starting Friday. The coupons were to have been distributed to 8.61 million people on a first-come, first-served basis.

However, discount coupons for lodging facilities and travel agencies will continue to be given out as they can be used starting in September.