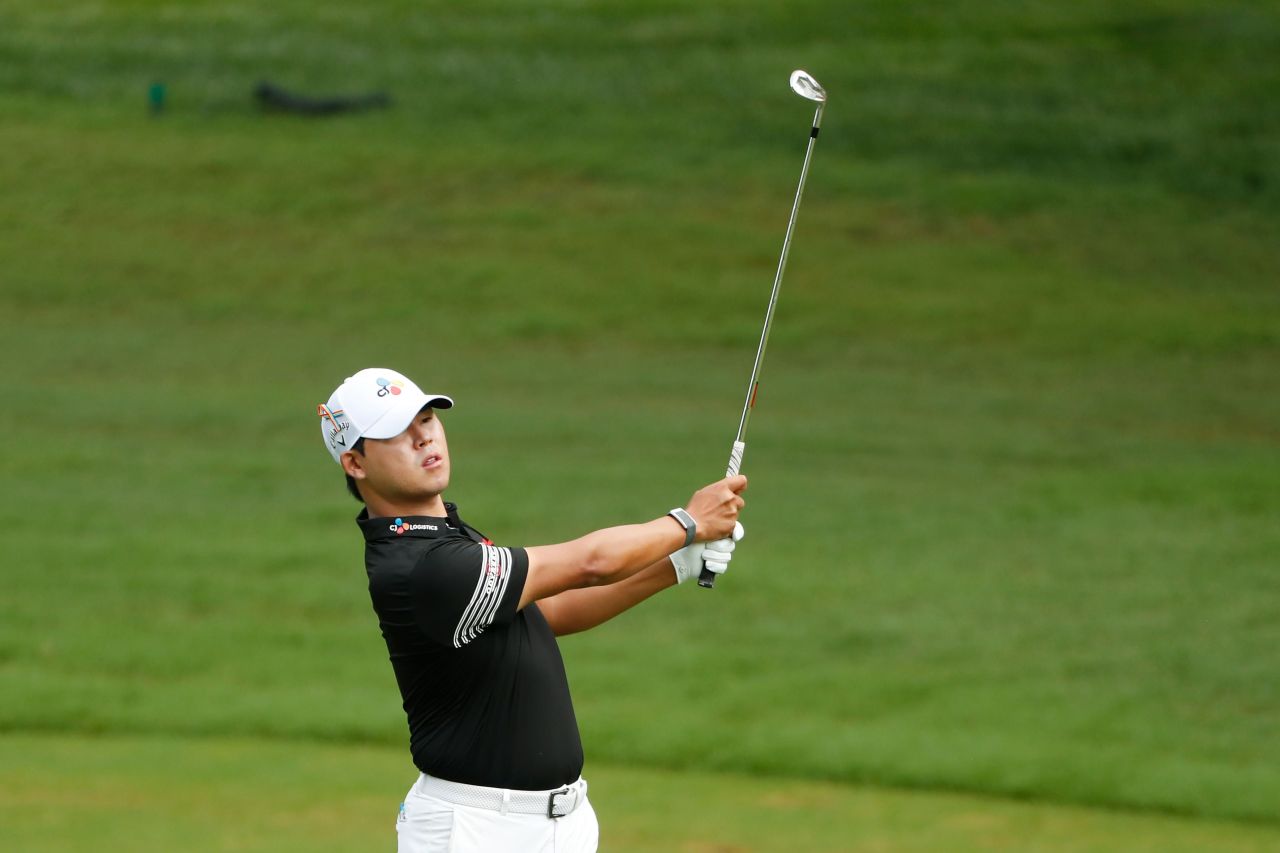 Kim Si-woo of South Korea plays his second shot on the second hole during the third round of the Wyndham Championship at Sedgefield Country Club on August 15, 2020 in Greensboro, North Carolina. (AFP-Yonhap)
WASHINGTON (AFP) -- South Korea's Kim Si-woo aced one hole and lipped out on another hole-in-one bid Saturday on his way to grabbing a two-stroke lead at the US PGA Wyndham Championship.

Sparkling on the same course where he won his first PGA title four years ago, Kim fired an eight-under par 62 to stand on 18-under 192 after 54 holes at Sedgefield Country Club in Greensboro, North Carolina.

Americans Rob Oppenheim, who shot 62, and Doc Redman, who fired a 63, shared second on 194 in search of their first tour win with countryman Billy Horschel another stroke adrift.

Kim is chasing a third US PGA title after his 2016 Wyndham win by five strokes over England's Luke Donald and a 2017 Players Championship triumph when he became the event's youngest winner at age 21.

Kim, whose most recent top-10 result was fifth last year at Greensboro, says this is different than his 2016 run because he is no longer chasing his first tour title.

"This time, I already win two times," Kim said. "I still feel pressure for tomorrow. I can get this one."

Kim aced the par-3 third hole, the ball landing near the cup and making a small bounce before hopping into the hole.

"I just hit it and then the ball goes just right at the pin," Kim said. "I did not expect that ace... some TV guys told me that was an ace and I was so excited."

He added short birdie putts at the fouth and fifth and answered a bogey at the par-3 seventh with a birdie at eight, then nearly smacked another hole-in-one at the par-3 12th.

Kim's tee shot bounced twice, then the ball lipped off the edge of the cup and stopped 14 inches away, setting up a tap-in birdie.

World number 115 Kim also ran off three birdies in a row at the par-5 15th from two feet, the par-3 16th from six feet and the par-4 17th after dropping his approach inches from the hole.

Americans Jim Herman, who fired a 61, and Mark Hubbard shared fifth on 196 with compatriots Peter Malnati and Webb Simpson on 197.

The event marks the final tournament of the US PGA regular-season, with the top 125 players in season points advancing to the FedEx Cup playoffs that begin next week at TPC Boston.

Kim, who shared 13th at last week's PGA Championship, stands 121st on the list but would jump into 30th with a victory.

The top 30 in season points after two playoff events advance to the season-ending Tour Championship next month at East Lake in Atlanta. (AFP)