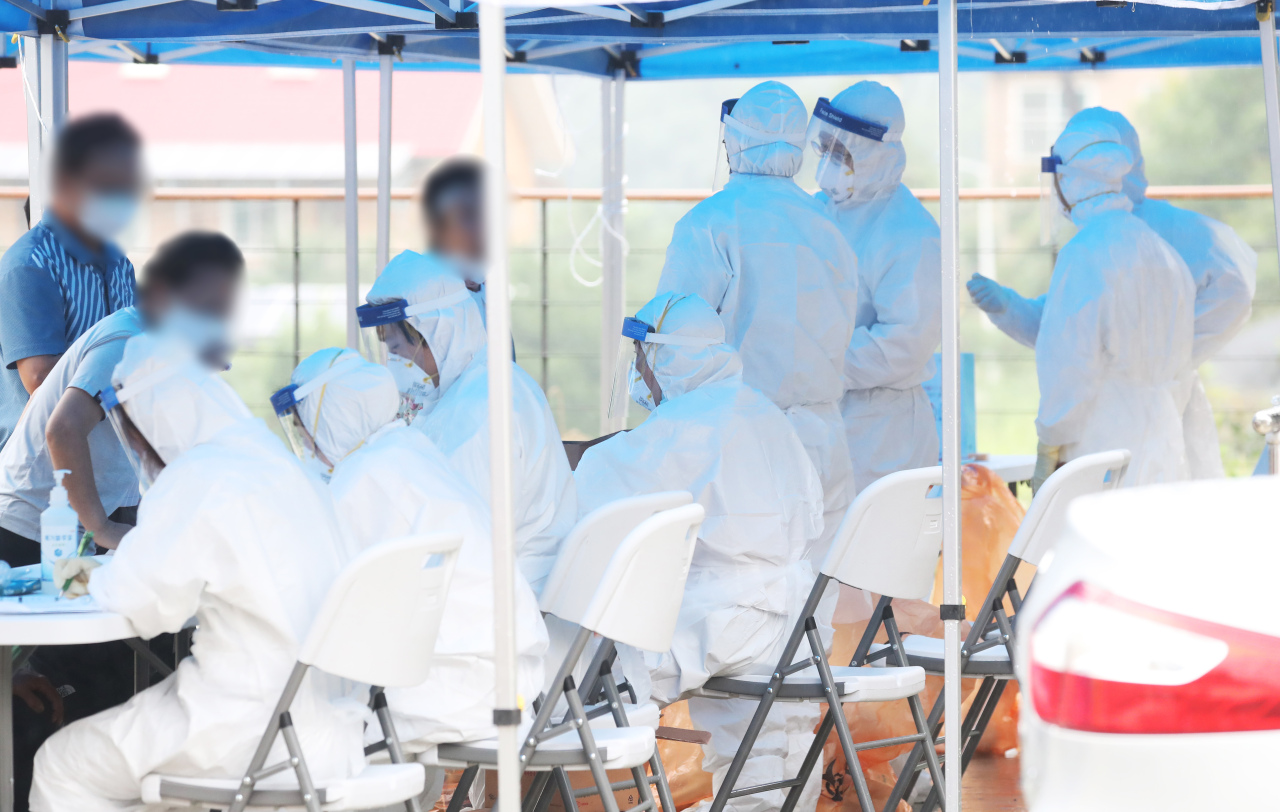 Medical staff work at a temporary facility in Yangpyeong, Gyeonggi Province on Saturday. (Yonhap)
South Korea's new coronavirus infections jumped to a five-month high of 279 on Sunday due mainly to a surge in church-related cases in the greater Seoul area.

This brought the country's total caseload to 15,318, according to the Korea Centers for Disease Control and Prevention. Of the total, 267 were locally transmitted cases.

It marks the highest figure since March 8 when the new daily infections stood at 367 after hitting a record high of 909 on Feb. 29, with Daegu and its neighboring North Gyeongsang Province at the center of the mass outbreak.

It also marked a three-digit number for the third straight day, following 103 infections Friday and 166 Saturday.

Alarmed by a resurgence of infections in recent days, the government raised social distancing in Seoul and its neighboring areas by one notch to Level 2 in the three-tier system Sunday for two weeks.

But health authorities are concerned about the further spread of the virus out of the capital area because sporadic cluster infections have shown no signs of letting up.

As of 2 p.m., infections tied to the Sarang Jeil Church in northern Seoul have swelled to 249, while cases linked to the Woori Jeil Church in Yongin, south of Seoul, increased to 126. Local authorities have ordered the churches' congregations to take COVID-19 tests.

Sporadic infections have also been reported in recent days from the fast-food franchise Lotteria, an investment company, offices, schools and coffee shops.

Twelve people arriving from abroad were also confirmed to have the virus Sunday, up from 11 cases a day earlier.

The central government and the Seoul metropolitan government said they will separately file a complaint against Jun Kwang-hoon, the pastor of the Sarang Jeil Church for allegedly violating self-quarantine rules and hampering the authorities' efforts to constrain the spread of the pandemic.

Jun and his followers took part in a massive anti-government rally in central Seoul Saturday after the Seoul city government banned large gatherings out of COVID-19 concerns, including one organized by his church. The pastor defied compliance with the self-quarantine order to participate in the rally, according to city officials.

As the country's new daily cases jumped to 279, President Moon Jae-in warned of stern responses to unlawful acts by some church members.

"It is a clear challenge to the national disease control and prevention system, and an unforgivable act that threatens the lives of the people," Moon wrote on his Facebook page, adding the government will take "very stern and strong" measures even by resorting to compulsory means.

He said the coronavirus outbreak is at a serious stage, and the government will make all-out efforts to get the virus under control.

The total number of people released from quarantine after making full recoveries stood at 13,910, up nine from the previous day. (Yonhap)