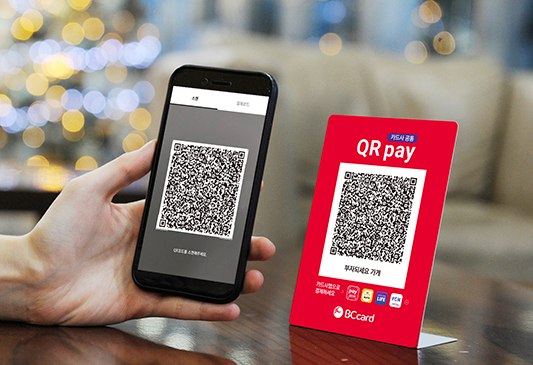 BC Card’s QR payment system (BC Card)
Cashless stores, digital payment and contactless banking all existed before the pandemic swept South Korea’s retail markets. What’s different now is that walletless services have gained dominance as a payment method, accelerating the nation’s shift to a cashless society.

Concerned about the new coronavirus, people are increasingly using mobile services to order food and other necessities online instead of dining out or buying their clothes at brick-and-mortar stores. During the ongoing coronavirus crisis, people in their 40s and 50s, who until recently were not considered mainstream mobile users, started to become a crucial customer base in the online e-commerce realm, according to some statistics.

Since fewer customers in the higher age brackets had used mobile services previously, the increases were much more striking for 40- and 50-somethings during the pandemic, according to the e-commerce firm.

“Non-face-to-face transactions were not mainstream before the coronavirus broke out earlier this year, but now the world without mobile services, including payment systems, is almost unthinkable,” said an official representing the retail sector. “The increasing use of mobile services is also accelerating the trend toward a cashless economy.”

Paying for coffee with cash at a Starbucks, for instance, is becoming a thing of the past in Korea. That’s because of the global coffee chain’s cashless initiative, which started last year in the domestic market. The coffee giant encourages customers to pay with credit cards or mobile payment systems instead of cash. Although cash payment is still an option, most customers prefer using credit cards or mobile payment apps for the sake of convenience.

The initiative was in place at 870 Starbucks outlets as of Aug. 11, or 60 percent of the company’s shops here, and the figure is expected to grow.

“The cashless scheme is aimed at offering tailored services for customers amid the increasing use of mobile payment services,” said a spokesperson for the coffee chain. “The simple and easy-to-use digital payment methods help reduce waiting time for customers.”

The global coffee chain is not the only one that is part of the cashless, or walletless, trend. State-run financial institutes and private businesses in different segments, from tech giants Kakao and Naver to retail behemoths Lotte and Shinsegae, are running cashless campaigns or rolling out payment systems that will hasten the disappearance of wallets and cash.

Pressed by the growing presence of nonfinancial players in the financial sector, traditional banks and credit card companies are also making efforts to adapt to the new cashless era.

Going cashless is a global trend. Israel launched a government committee to transform the nation into a cashless society in 2014. France has banned cash transactions above 1,000 euros, Spain above 2,500 euros and Australia above AU$10,000.

Hopping on the cashless bandwagon, the Bank of Korea is pushing for similar changes. Having collaborated with department stores and convenience store operators since 2017, the central bank is running a campaign to reduce the use of coins. At convenience stores, for example, customers can put change from their purchases on their transportation cards, or have spare change transferred to their bank accounts. 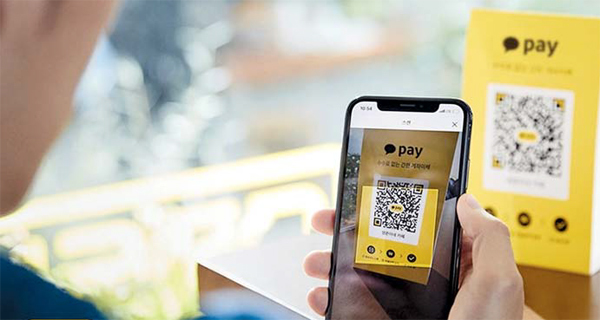 Faced with a fast-changing business landscape, conventional card companies and banks are struggling to hold their ground against fintech companies. To better compete with tech-savvy companies such as Kakao Pay, Shinhan Card, for example, is adopting new technology and offering new payment solutions, such as one based on face recognition and another on sound waves. The QR method is favored by card companies like BC Card, an affiliate of telecom firm KT. BC Card’s QR payment solution is available at some 45,000 convenience stores in Korea run by five major convenience store brands, including GS25 and CU. The card issuer has also acquired a 34 percent stake in the online bank K Bank.

Many market watchers forecast that nonfinancial, tech-centered companies will wield a larger influence in the online financial and banking segments in the coming years.

Less than four months after its launch in November, the service had attracted 200,000 new subscribers and the investments have totaled 20 billion won.

“The investment service showed the influence of a non-face-to-face mobile platform and the potential of Kakao’s financial businesses,” said Lee Hyun-chang, an analyst from Yuanta Securities.

In the walletless movement, older people and people with disabilities can have difficulty adjusting to the disappearance of cash.

According to a BOK report on nations that have implemented policies to move toward a cashless society, seniors, the disadvantaged, low-income families and people in remote areas have had difficulty keeping up with the rapid transition from cash to digital payment.

Citing a recent poll in Sweden, the report said seniors in 15 of the European nation’s 21 states were unhappy with digital payment services. A different survey of New Zealand’s state-run Reserve Bank of New Zealand showed that 45 percent of the respondents weren’t ready for the cashless society.

Despite the recent growth in mobile use among older people here, many seniors are still not used to using smartphones for payment.

“Under its principle that no citizen should face troubles in using cash, the BOK will keep monitoring the global trends for cashless economy and trying not to leave seniors behind by offering various payment options,” the central bank said in the report.