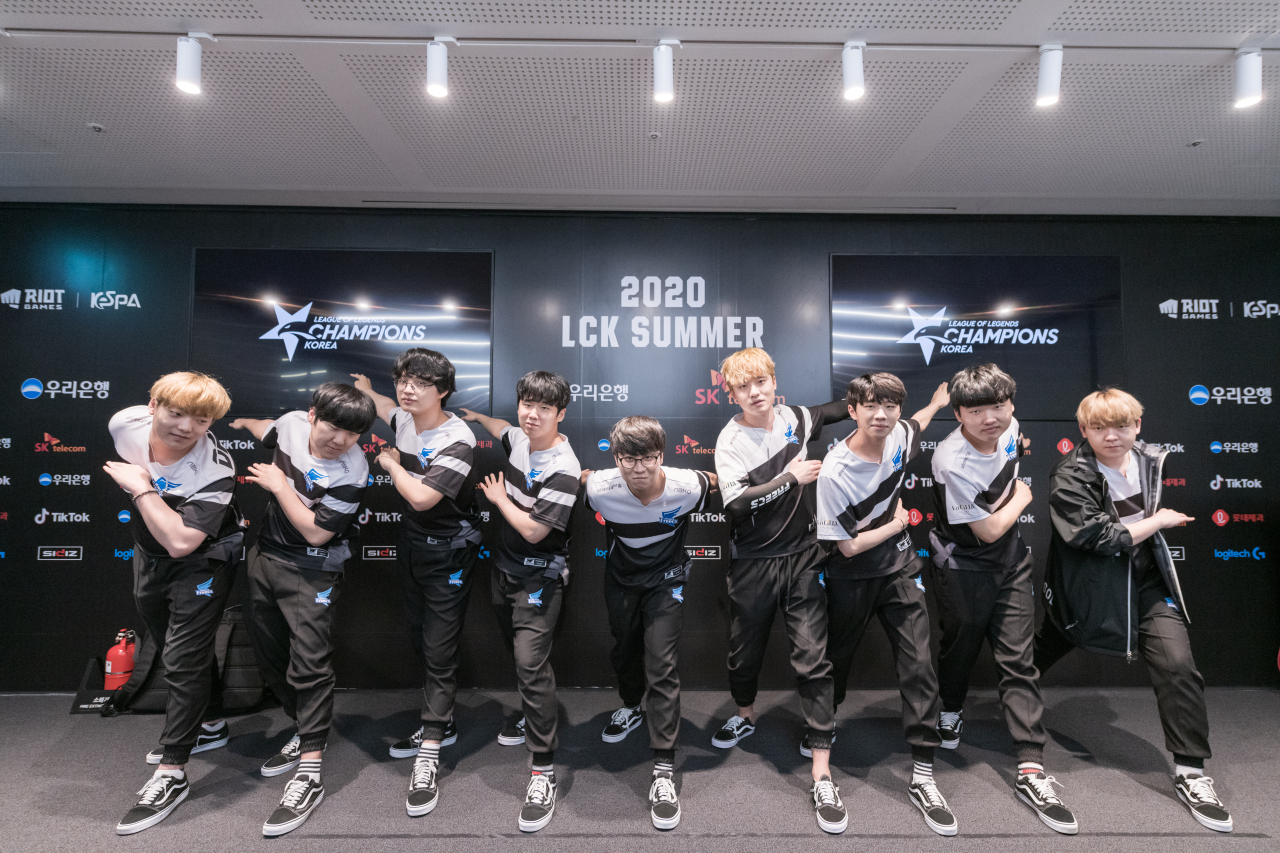 Players of Afreeca Freecs at LoL Park Arena in Jongno, Seoul on Friday. (Riot Games)
T1 secured their playoff spot with a 2-0 victory over Team Dynamics on Sunday, leaving only one final ticket left for the taking.

Four teams -- Damwon Gaming, DRX, Gen.G and T1 -- have secured playoff positions already and will battle in the playoffs over the next two weeks.

Three teams technically have a chance to clench the final ticket to the playoffs, but all odds are in favor of Afreeca Freecs.

Afreeca Freecs is far ahead of its competitors, KT Rolster and Sandbox Gaming, with an 8-6 record.

Afreeca has yet to beat a top four team this summer or lose to a lower ranked team, earning the nickname “Strong team decider.” If Afreeca can win two or more of the remaining four matches, it will qualify for the playoffs as 5th place or higher. The remaining matches are against T1, Gen.G, Sandbox and KT.

KT Rolster and Sandbox Gaming both have a record of 6-9, with quite a big gap in set score with Afreeca Freecs. As a result, winning the rest of their matches is a must in order to make playoffs. Even if they win all their matches, if Afreeca wins one game and loses the rest with good set scores, they will still fail to make playoffs.

It is time for coach YamatoCannon of Sandbox Gaming to show his magic again, just as Schalke 04 of LEC qualified for playoffs after going 1-10 in the first 11 matches.

The veterans of KT will need to improve for both the playoffs that is still reachable with a combination of luck and skill. Also, even if they fail to reach the playoffs, they might still head to the world’s qualifiers, giving them a motivation to perform well in preparation.

The competition among playoff qualifiers is fiercer.

Both Damwon and DRX are tied at 13-2, with three games remaining. Damwon will place first if it wins the rest of its matches because of set score, but if either of the two teams fails to win one of its games, the first place spot is still up for grabs.

While T1 is on a five-game win streak after starting Clozer in the mid-lane instead of Faker, T1 has games against first place Damwon, second place DRX and fifth place Afreeca left in the season while Gen.G has an easier match-up against Hanwha, Sanbox and DRX.

How the rookie mid-laner will fare against the top mid-players of LCK such as Damwon’s Showmaker and DRX’s Chovy remains to be seen.

No LCK team has yet achieved a guaranteed spot at Worlds.