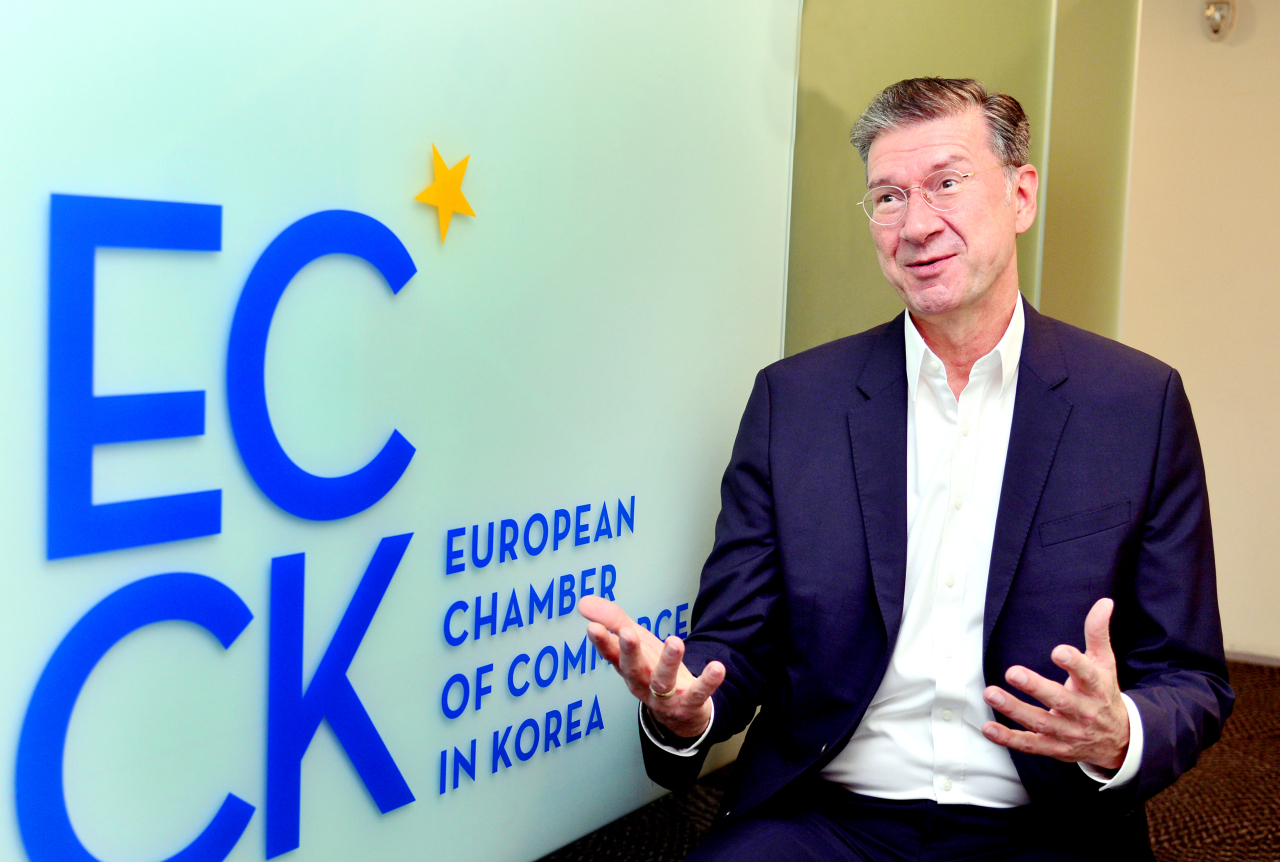 Dirk Lukat, a new chairperson of the ECCK and CEO of DB Schenker Korea (Park Hyun-koo/The Korea Herald)
The new chief of the European Chamber of Commerce in South Korea believes there are many opportunities for Korean and European companies to cooperate in sustainability areas in the future.

“In Europe, sustainability, particularly environment, has been a strong focus for many years and there are many technologies developed related to clean energy. I can see many opportunities for cooperation between European and Korean companies in the areas,” said Dirk Lukat, a new chairperson of the ECCK and CEO of DB Schenker Korea, in an interview with The Korea Herald.

“If you sell parts or finished products to Europe and to the US, there is a big focus on sustainability, for instance, how the manufacturing is processed and how the energy is generated. There are great opportunities for Korea to enhance on that and these are key factors that play into (Korea’s) new green deal,” he said.

During a summit between Korea and the European Union in June, President Moon Jae-in said he is hoping Europe is key partners of the nation’s green new deal policy, which aimed at accelerating the transition to the green economy, including eco-friendly and low carbon, by 2025.

The two regions are now forming a cooperative body for the transformation of eco-friendly industrial ecosystems such as green industries and green finance as part of a follow-up.

As for the summit, he said, “From the feedback, I can say there were very amicable and positive discussions. The two agreed to go forward together with the strong focus on digitalization and sustainability.”

“Of course there is a bit of downturn now (due to the pandemic), but, in general, European companies are aware there is strong gross domestic product in Korea and there is pretty decent growth in normal days. They want to participate in and grow together,” he said.

Since 2015, the ECCK has published ECCK White Paper, a collective expression of the views on the business environment in Korea by member companies operating in a wide range of industries, issues and recommendations raised over the past year.

“We received an official written feedback from relevant government ministries, where over 30 percent of the recommendations were positively reviewed by the government. It shows great cooperation we have.”

Lukat said the ECCK’s emphasis will be working on removing regulations that are redundant for both European companies doing business here and Korean firms in the global market.

“It is important for Korea to have international standards in terms of testing, certification and approval procedures not only for European firms but also for Korean companies,” he said.