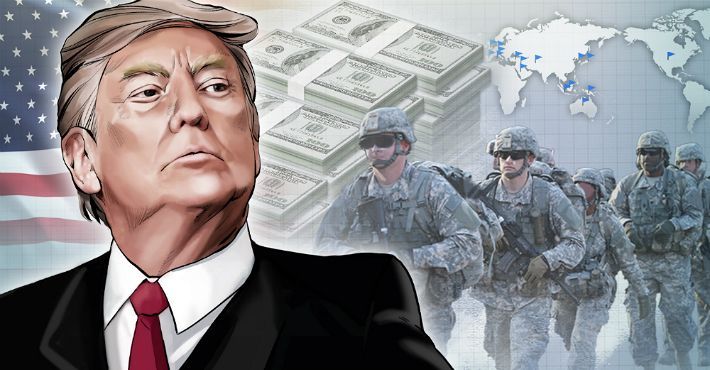 (Yonhap)
WASHINGTON -- US President Donald Trump said Wednesday he decided to cut American troops in Germany because the country is not paying enough for protection, stressing the United States will no longer be a "sucker."

The US military earlier announced the troop drawdown plan that calls for withdrawing about 12,000 troops out of 36,000 US forces and relocating about half of them to other regions in Europe to keep Russia in check.

"We don't want to be the suckers any more ... We're reducing the force because they're not paying their bills. It's very simple," Trump told reporters at the White House.

Trump also said that he would reconsider the troop withdrawal if Germany agrees to pay more.

The decision came amid a protracted impasse in negotiations between Washington and Seoul on how to share the cost of the upkeep of some 28,500 American troops stationed in South Korea to deter North Korean aggression.

The troop cut in Germany has raised concerns that the Trump administration may come up with a similar plan for US Forces Korea. Trump has insisted that South Korea is a rich nation that is not paying enough for its defense and that it "can and should" pay more.

US Defense Secretary Mark Esper later denied issuing any orders about a withdrawal of troops from the ally but said the military was looking at adjustments to deployments worldwide.

Talk of a possible troop drawdown from South Korea came to the fore in June when former US Ambassador to Germany Richard Grenell said in an interview that Trump was clear about his intent to bring American forces home from a number of countries and he mentioned Seoul as one of them.

Observers say Washington could use the possible troop reduction as leverage to pressure Seoul to settle the stalled negotiations on determining its share of the cost for keeping the American troop presence.

The talks have remained at an impasse as Washington has demanded a 50 percent hike from the $870 million that Seoul agreed to pay under the previous deal that lapsed last year. Seoul has offered a 13 percent raise as the maximum. (Yonhap)