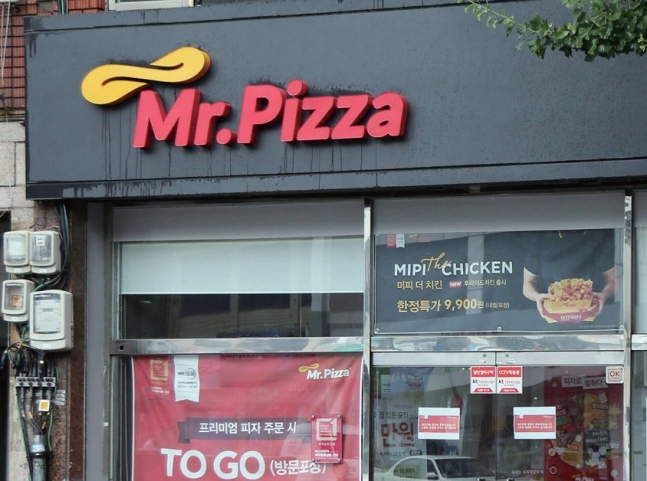 An exterior view of Mr. Pizza restaurant (Yonhap)
TR Investment has been given exclusive rights to negotiate with shareholders of MP Group, the operator of pizza restaurant chain Mr. Pizza, to buy a 41.39 percent stake for 35 billion won ($29.19 million), a disclosure showed Thursday.

As a result, Jung will remain the second-largest shareholder of MP Group following the transaction, holding 29.5 million shares out of some 120 million shares.

TR Investment’s exclusive rights to bid for the takeover will be effective for a month, according to the disclosure. In the meantime, TR Investment will conduct a two-week due diligence for the acquisition deal.

The news comes a month after MP Group announced plans to put its stake up for sale to improve transparency in management of the company whose trading on the Kosdaq bourse has been suspended since July 2017. MP Group has selected Samil PricewaterhouseCoopers as the deal manager.

Jung was sentenced to a three-year jail term suspended for four years by a high court in December 2019, on charges of embezzlement and breach of trust.

TR Investment is a Changwon-based private equity house founded in 2013. It has invested in Korean companies including optical fiber pick-up product maker Optrontec.