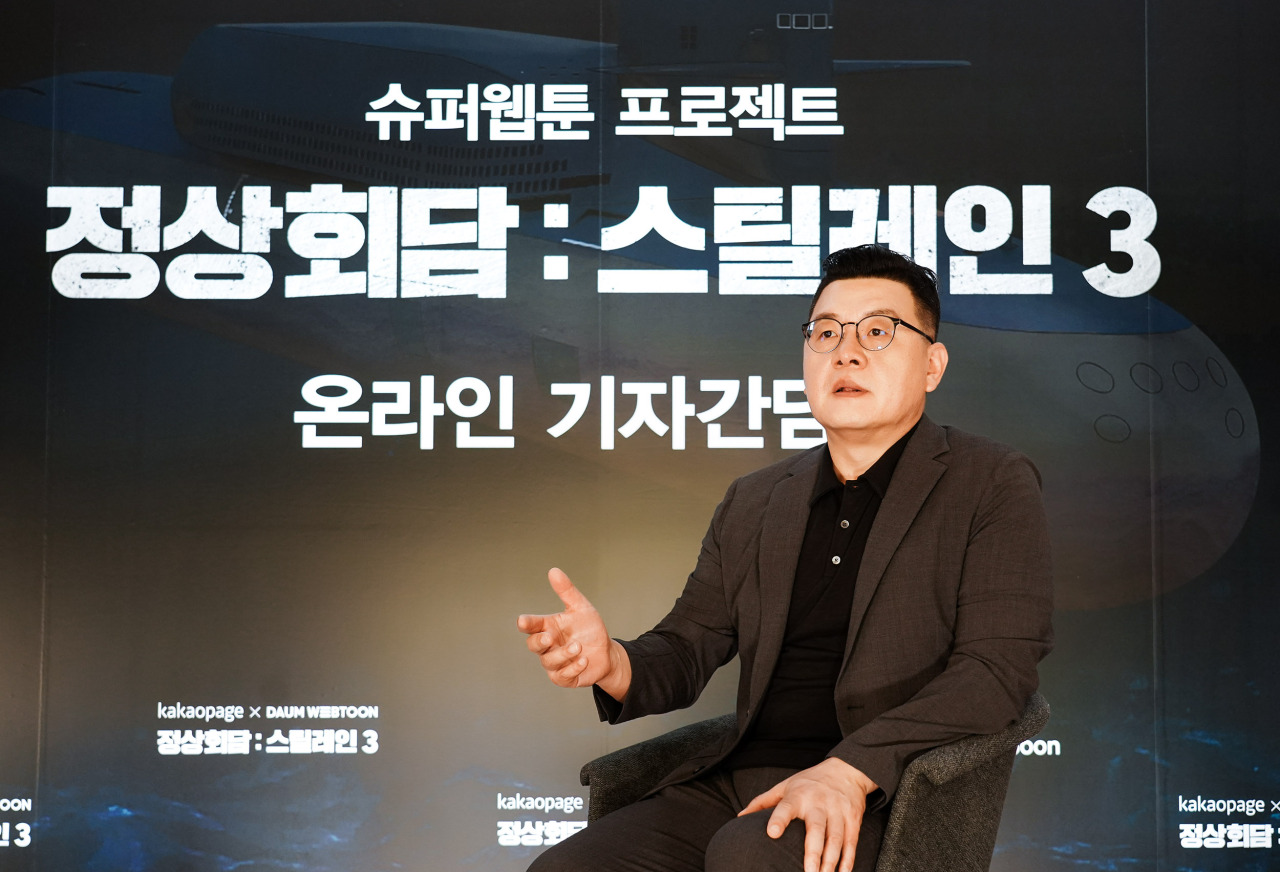 Film director and webcomic writer Yang Woo-suk speaks during a press conference conducted in Seoul on Tuesday. (Kakao Page)
With three webcomic series and two films of the “Steel Rain” series about the Korean Peninsula, director-writer Yang Woo-suk has now built his own universe about what he calls “simulations” of situations and solutions to the ongoing inter-Korean conflict.

“It’s a story that must be told and must be called upon by someone. I’m not trying to send a message, but giving suggestions of simulations and throwing questions through them. And the audience will make their own decisions from them,” the director said during a press conference coordinated by Kakao’s webtoon platform Kakao Page on Wednesday. Kakao Page CEO Lee Jin-soo also was in attendance.

Yang’s upcoming film “Steel Rain 2: Summit” is based on his third webcomic series “Steel Rain 3,” which was published via Daum Webtoon between September 2019 and early July this year.

Starting with the first webcomic series in 2011, Yang has been constantly expanding his universe about the division of the Korean Peninsula. The second set of the comics, adapted into a film in 2017, drew on the possible collapse of North Korea following a coup. The upcoming sequel is set to show an emergency summit of the leaders of the two Koreas and the US aboard a submarine.

An action-packed blockbuster comic-movie crossover, Yang’s “Steel Rain” has often been compared to superhero movies from DC and Marvel, but the Korean director said the comparison does not fly.

“The Korean Peninsula remains within the Cold War system while international society is changing fast. Whereas news content spotlight the phenomenal aspects of the situation, I believe comics and novels can provide a more fundamental and comprehensive view. The inter-Korean conflict is not a problem that can be solved between the two Koreas, and hence the story must expand beyond the peninsula,” Yang said.

He went on, “It’s a sad reality, but the ‘Steel Rain’ series has its roots in the divided state (of the peninsula). In most creations dealing with the subject, the main characters die. They face a big and unexplainable wall, are discouraged, and in some worst cases, they commit suicide. This is because the division did not result from our own choices. It’s not something that we (Koreans) can solve by ourselves. Even one of the characters in ‘Steel Rain 1’ died.” 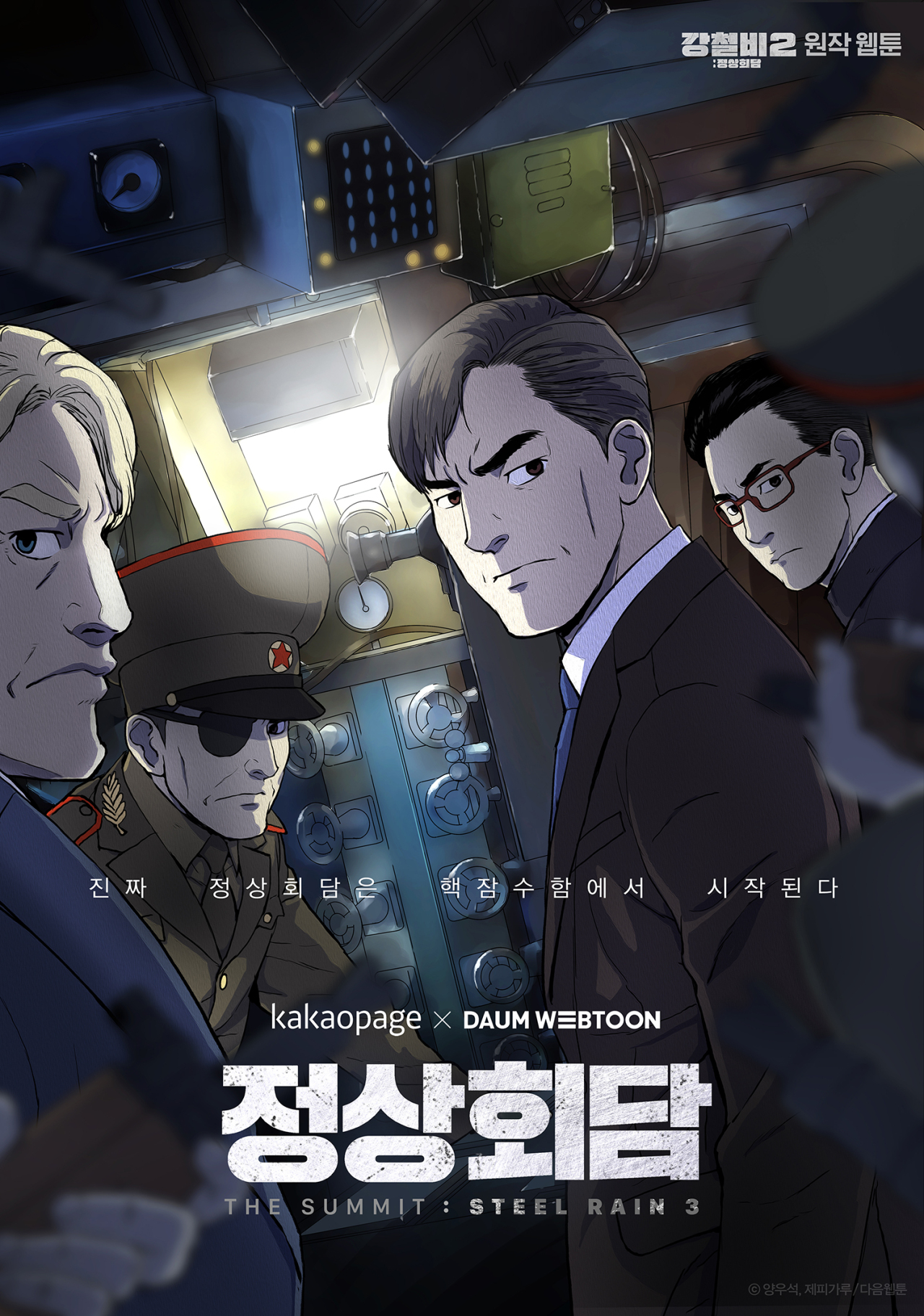 Kakao Page CEO Lee, who said he has been working with Yang for a decade, said super IPs like the “Steel Rain” project are exactly what the company is made for and what it is aiming to assemble, support and develop.

“Securing more IP businesses is everything to Kakao Page. We started off as a small platform service, and what saved this crippling company was a web novel, and from that experience we learned how the platform must combine with the IPs and how far we could extend them.”

Kakao Page currently holds around 7,000 original IP titles and its goal now is to reach 70 million daily active users, or about 1 percent of the global population, according to Lee.

IP business in Korea differs from that of the US comics giants, due to the different environments in which the content is produced and consumed, he explained.

“The Marvel universe had been built upon stories that were accumulated over a long time, whereas Kakao Page can make hundreds and thousands of fandoms in the global market over a very short period. The market is much more fragmented and the audience preferences much more diverse,” Lee said, saying “Steel Rain” could appeal to the global audience thanks to its quintessential “Korean” story.

Director Yang hinted at further expansions to his story, stating the next follow-ups may be about families.

“While Korean society has witnessed changes in the forms of families, we have not given proper thought to it. Who will raise the children, what meaning do the children have to the adults and the adults to the children. I want to talk about such stories,” Yang said.