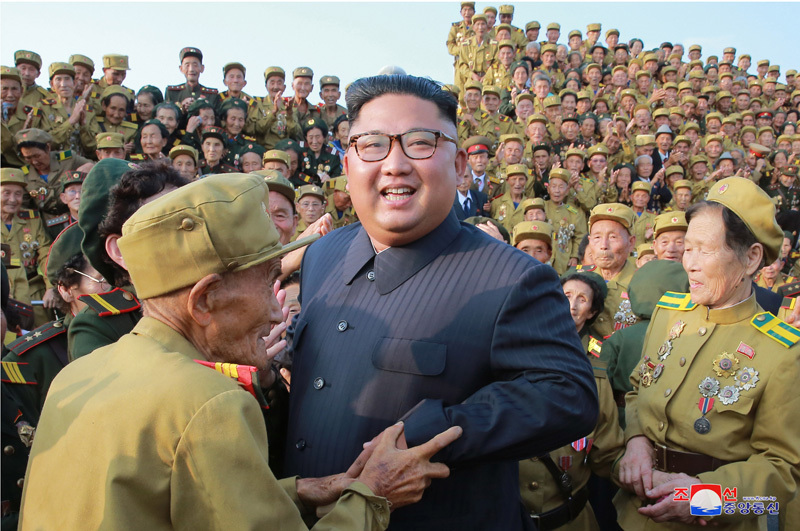 North Korean leader Kim Jong-un greets war veterans in this photo released by the North's Korean Central News Agency on July 26, 2018.
North Korea is set to hold a national conference of war veterans for the first time in two years, to mark the 67th anniversary of the end of the Korean War, state media reported on Wednesday.

The Korean War ended in an armistice on July 27, 1953, and was never replaced with a formal peace treaty, leaving the two sides technically at war. The North officially refers to the war as the Fatherland Liberation War and claims victory.

The Korea Central News Agency reported the sixth national conference of war veterans will be held, but did not specify a date. The event has usually been taking place few days before July 27, the North’s national holiday calling it the “victory day.”

“The conference will serve as a significant occasion in glorifying the life of the war veterans and in carrying forward the history and tradition of war victory,” it said.

In 2015, Kim delivered a speech during the conference and praised the war veterans. In 2018, he held photo sessions with the participants, and visited the war cemetery to pay tribute to the soldiers. This year, it is unsure whether he will make a public appearance, as he has kept an unusually low profile amid the coronavirus pandemic.

The planned large-gathering arrives as the North has taken stringent steps to prevent an outbreak of the coronavirus, by enforcing a social distancing policy, mandating wearing masks in public and discouraging mass events and gatherings. Pyongyang still claims it has zero confirmed cases of COVID-19.

Observers say the North is likely to hold the large event, aimed at bolstering internal unity and control domestic situation, amid its worsening economy under international sanctions and coronavirus pandemic that ceased trade with neighboring China.

The North in the past has launched military provocations around this time, such as firing short-range ballistic missiles into the sea.

Last month, the North upped the ante when it demolished the inter-Korean liaison office in its border city Kaesong, raising the possibility of further provocations. But later, the North Korean leader said he has decided to suspend military actions planned against Seoul.