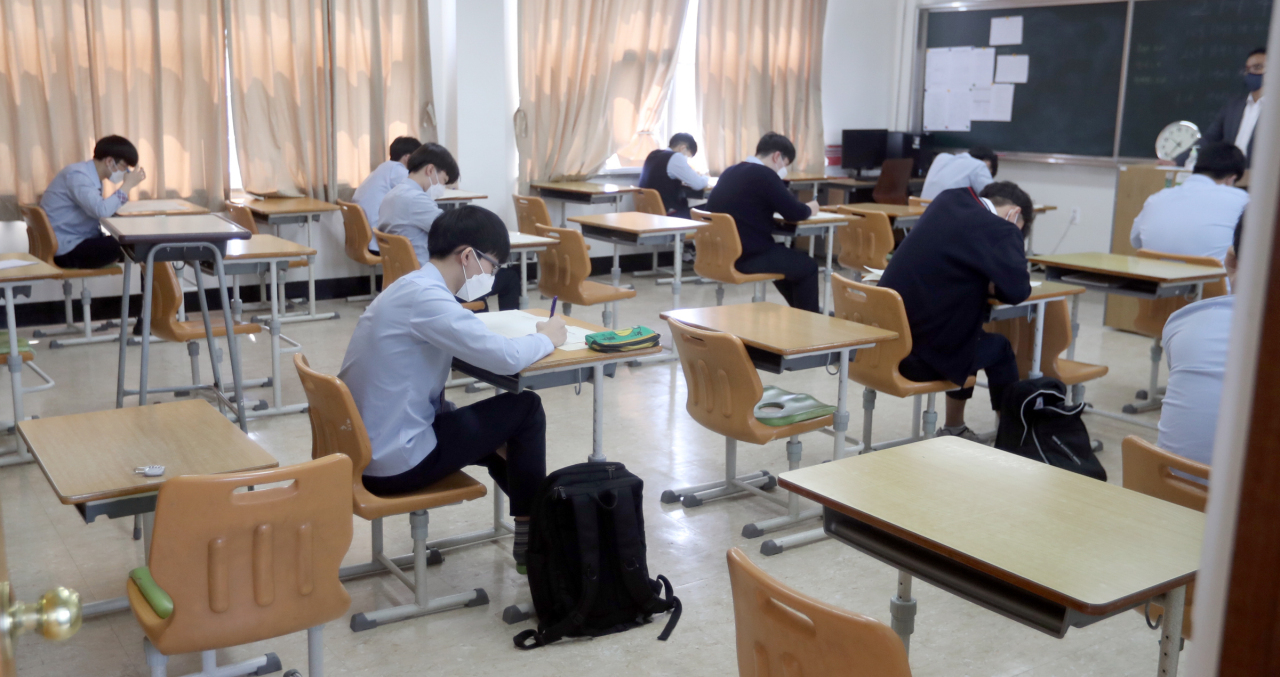 High school students in Jeonju, North Jeolla Province, take their first mock college entrance exam of this year in May after physical classroom teachings were postponed for weeks due to the coronavirus pandemic. (Yonhap)
A big question hangs over this year’s college entrance exam, the Suneung.

As tens of thousands of high school seniors and graduates prepare for the grueling marathon of back-to-back exams, slated for Dec. 3, many question whether they are on equal footing.

The impact of the coronavirus outbreak has been unequal, putting those still in school at a disadvantage against older competitors in university admissions, many students, parents and some experts say.

“Everything was so chaotic from the virus outbreak as to I didn’t know when to put my uniform back on and go to school for classes,” said Kang, a high school senior at Myeong-Shin Girls’ High School in Incheon.

“Online classes were there, but it was hard to concentrate on. I am not sure if I learned anything much from just staring at the computer screen all day.”

After weeks of shutdown, schools opened for high school seniors on April 9, with online classes first, way later than the original schedule of the first week of March. In-person classes resumed on May 20.

Now, like many other seniors, Kang faces a hectic schedule of studying for the College Scholastic Ability Test, December’s standardized college entrance test known as the Suneung, which was pushed back from the original date of Nov. 19.

At the same time, she has to prepare for mid-term and final exams and for admission requirements that differ considerably depending on universities.
Kang said she feels behind repeat takers, as the graduates have already finished the high school curriculum, free of all the confusions about grades, portfolio-building amid an absence of available extracurricular activities and other perceived necessities for university admission.

“Those who already graduated have portfolios prepared, but I was planning to upgrade mine this year,” Kang added. “We were barely going to classes, and extracurricular activities have been cut out likewise. At this point, I should be focusing 100 percent on the Suneung in December.”

Universities pick new students through two admission procedures, one of which is based on the Suneung scores and the other is based on a portfolio made up of school grades, extracurricular activities, volunteer work and more.

Many high school students feel the same way as Kang, a survey shows.

The Education Ministry, however, say such worries are unwarranted, at least for the state-run college entrance exam.

Results from a mock test in June showed no marked difference from those of previous years’ tests when it comes to discrepancy in achievements between high school seniors and repeaters.

Both groups were almost equally disadvantaged from the coronavirus outbreak, officials said. While schools were closed, so were many private Suneung prep institutions for repeaters, they said.

“There has always been a gap between the scores of third-year high school students and graduates in all the mock tests and the actual CSAT,” said Sung Ki-sun, president of the Korea Institute for Curriculum and Evaluation, which manages the Suneung, in a press briefing earlier this month.

Sung said that there appears to be no reason to specially adjust this year’s test and that the questions will be similar in difficulty to previous years.

Lee, a 19-year-old high school graduate who is now preparing to sit the Suneung again, feels everyone was disadvantaged in his or her own ways from the unprecedented virus crisis.

His private CSAT prep institute close abruptly for five weeks early this year when the virus situation was at its worst.

“The unwanted five-week break disrupted my study pattern, and from being forced to stay home during that period, I lost much of an opportunity to really concentrate on studying,” said Lee, who graduated from Songgok High School.

“This is a chaotic time for everyone, so I don’t know if high school seniors are more disadvantaged than graduates in preparing for the CSAT. They lost class time, but we lost our study time, too.”

Some private experts said coronavirus-triggered school disruptions are likely to have a negative impact on high school seniors in middle and lower tiers.

“Students in the higher percentile are likely to have already finished this year’s school course in advance at private institutes,” said Lim Sung-ho, CEO of Haneul Education and Jongro academic institute.

“But that’s precisely not the case for the remaining ones, and they are the ones losing the most in this year’s race.”

June’s mock test results also point to a growing achievement gap between the top-tier and the rest, he pointed out.

“Top-level high school students’ scores remained almost same for the June mock exam, but the gap between them and the remaining students became wider,” said Lim.

He criticized the Korea Institute for Curriculum and Evaluation for failing to acknowledge the situation ordinary seniors are in now from the obvious disruptions in school education, particularly during the shutdown.

Nevertheless, the authorities shouldn’t try to change the rules to offset perceived disadvantages, other experts stressed. Any attempt at this point will bring only confusion to all those preparing for the December exam.

“Some civic groups and parents associations voiced the need to make this year’s CSAT easier or change the scoring system from the current relative evaluation to absolute, but those two must be avoided at all costs,” said Woo Youn-cheol, head of the admission strategy research center at Jinhak, a college admissions company.

There is no guarantee that the proposed changes will have the intended effects, Woo said. For example, an easier test could benefit repeaters more, he added.