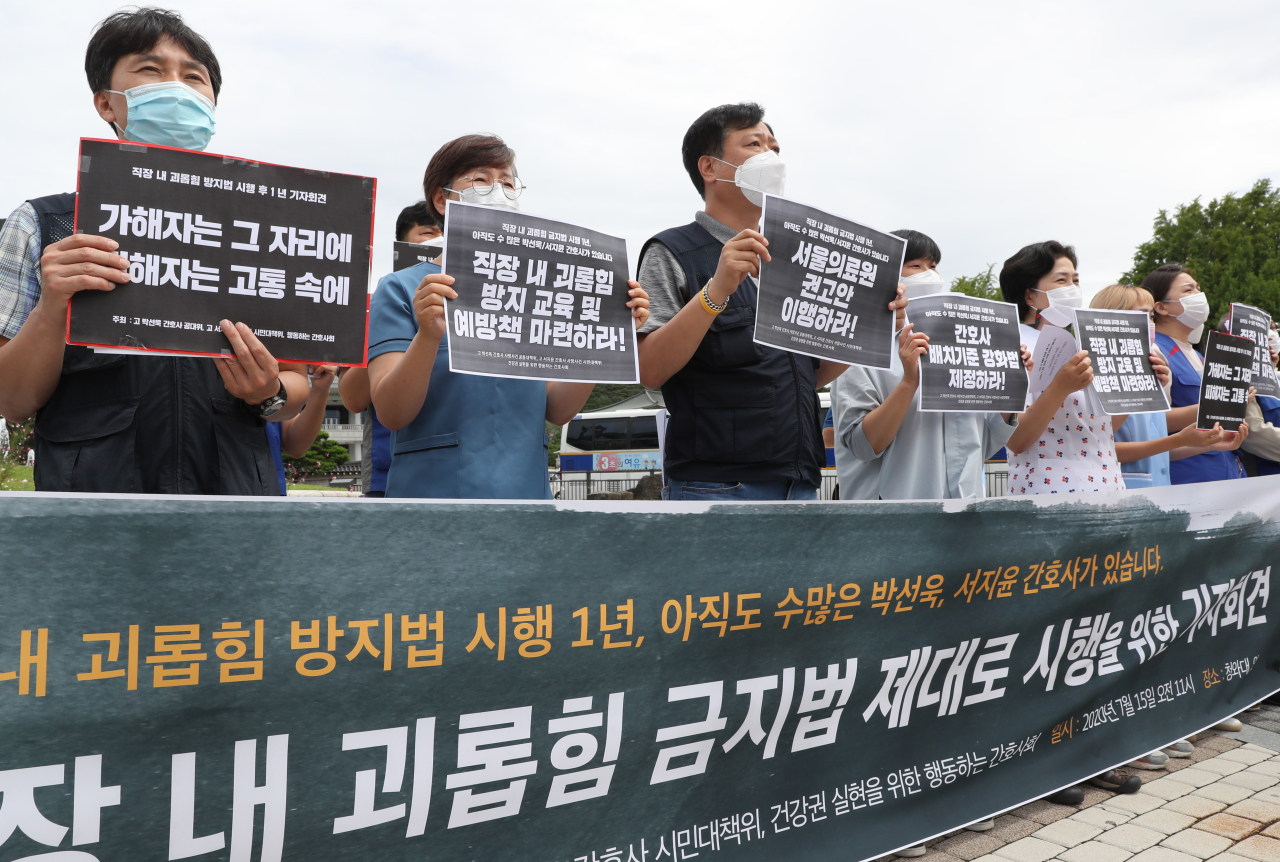 Activist groups hold a press conference in front of the Blue House in central Seoul on Wednesday, calling for stricter anti-bullying measures at hospitals where nurses have killed themselves over bullying and heavy workload. (Yonhap)
A year has passed since the so-called “workplace anti-bullying law” came into effect, but experts say a meaningful change in the work culture has yet to arrive, though progress is being made in efforts to prevent abusive practices and protect victims.

According to a survey by the Korea Labor and Employment Relations Association, 71.8 percent of workers said nothing has changed in terms of bullying practices at work since the law went into effect in July last year. Nearly 20 percent of the respondents said they saw a decrease in bullying since the law has been in force, but 8.4 percent reported seeing an increase.

Many companies have introduced education programs and internal investigative procedures on workplace bullying, although it is hard to say whether such efforts are sufficient and effective, he added.

The anti-harassment law came in response to a public outcry over “gapjil,” a newly coined word referring to abusive conduct toward subordinates by people in positions of power.

One of the most high-profile gapjil cases was the 2014 “nut rage” incident involving Cho Hyun-ah, a daughter of the late Korean Airlines chairman who infamously ordered an airplane back to the gate before takeoff in New York as she was upset about the way her nuts were served by a flight attendant. She received a 10-month jail term, suspended for two years.

Footage showing the chief of an online storage company physically abusing and insulting his employees also went viral that year. Bullying culture in the nursing field also came into the media spotlight after several nurses died by suicide.

According to a 2017 survey by the National Human Rights Commission, 73 percent of workers said they have suffered workplace bullying, and 60 percent of respondents said they didn’t take action against it because they feared negative consequences.

Since the law came into effect, workers seem to be more active about reporting incidents. From July 16 last year to March 31, the Labor Ministry received a total of 3,347 complaints on workplace bullying, with around half of them involving verbal abuse. Some 2,739 of those cases were settled during or after arbitration by the ministry.

“One thing my colleagues and I agree on after the law passed is that protection would be available to us if bullying from higher-ups were to occur,” said Kim, a 32-year-old employee at a local petrochemical firm.

“My company’s executives have publicly mentioned to employees that workplace bullying is intolerable, and that stance has made people more careful when interacting in the office.”

Kim said the lack of comprehensive educational and counseling programs could have hindered employees from fully understanding their rights in the workplace, but now he and his fellow workers feel empowered to fight discrimination in the office.

“We are just more confident in what we do now and feel safer saying ‘no’ when needed,” he added.

Despite progress, experts believe that more work is needed to uproot abusive practices at workplaces. Greater attention, they say, must be paid to changing the overall work culture of South Korean society.

Experts are calling on the government to strengthen support for educational programs while all parties work to change the country’s corporate work culture.

“There still are loopholes in the anti-bullying law, and it is understandable why some people are asking for strengthened legal measures, but laws can’t solve every problem,” said Jun In-sik, chief of the employment and labor policy team at the Korea Chamber of Commerce and Industry, during a panel discussion Wednesday.

“In a long-term perspective, for problems to really be solved, more efforts are needed to improve the top-down decision-making culture, reduce overtime work and cut the number of excessive after-work team dinners.”

“The government is desperate to be more active on this, as verbal and physical abuse in the workplace are still happening,” Labor Minister Lee Jae-kap said during the discussion.