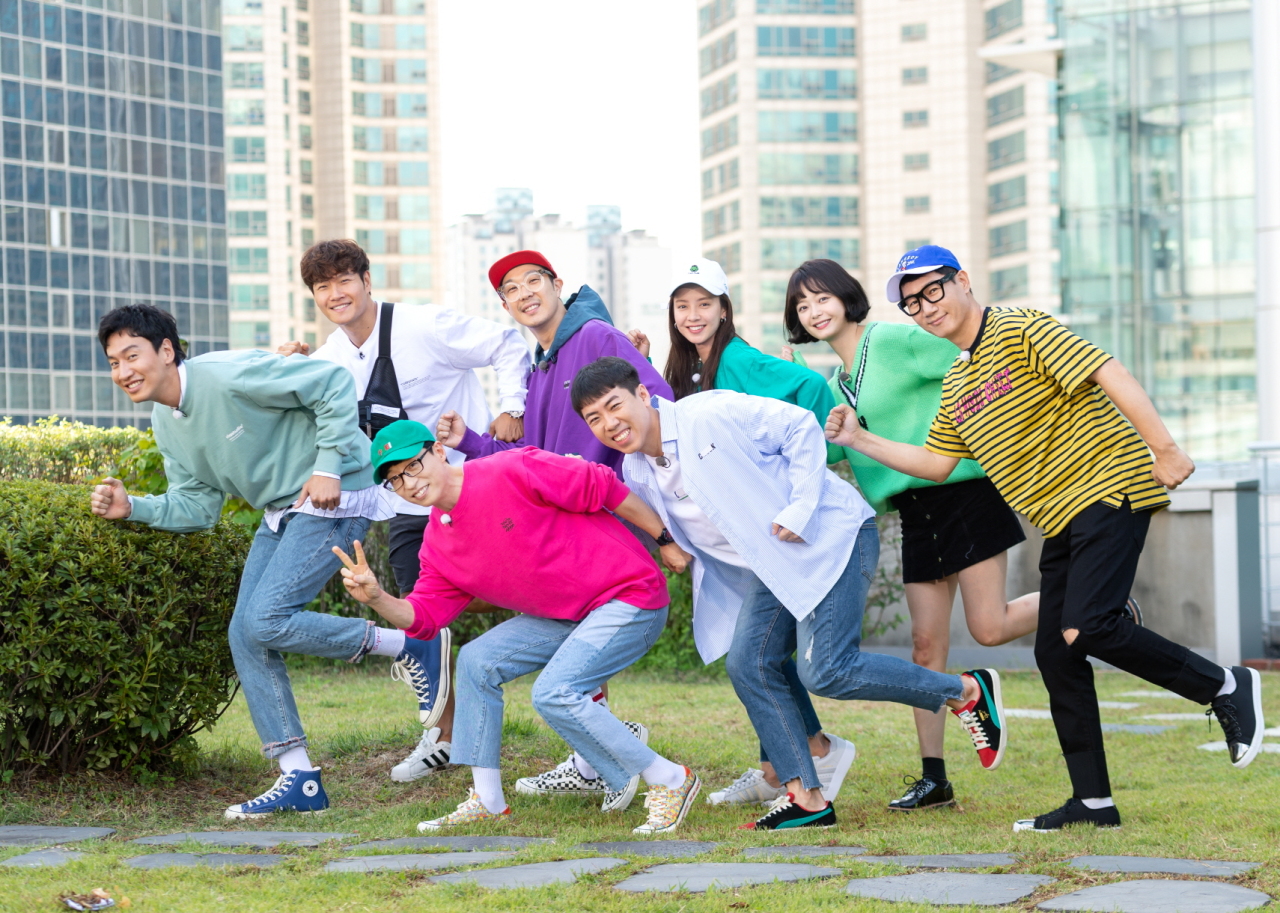 The cast of variety show “Running Man” poses together. From left, top row: Lee Kwang-soo, Kim Jong-kook, Haha, Song Ji-hyo, Jeon So-min and Ji Suk-jin. From left, bottom row: Yoo Jae-suk and Yang Sae-chan. (SBS)
“Running Man” marked its 10th anniversary on Sunday, becoming SBS’ longest-running variety show. A game program where celebrities chase each other and snatch their opponents’ name tags, it is one of the most popular South Korean TV shows in Korea as well as abroad.

Kicking off as a segment on the SBS reality show “Good Sunday” on July 11, 2010, “Running Man” became its own show in March 2017 when “Good Sunday” came to a close. The variety program is the third-longest-running Korean TV show in history, the first being the KBS talk show “Happy Sunday” and the second the MBC variety show “Infinite Challenge,” which respectively spent 17 years and 13 years on the air. “Running Man” ranked among Koreans’ top 10 TV shows from 2013 to July 2019, according to Gallup Korea, and enjoys a wide fandom overseas.

When “Running Man” kicked off, there were similar entertainment programs on other channels. While those shows were set in rural areas, “Running Man” declared that it would host an urban chase where the participants would run around and engage physically with each other.

“Running Man” took its chases to other Asian countries, where it became hugely popular. Then it was localized and exported to nine countries including China, Japan, Singapore and Indonesia.

“Running Man” was not without troubles. It hit a low point in the second half of 2016 after its main producers moved to the show’s Chinese production. The sudden departure of rapper Gary, who had been a regular member of the cast for six years, in October that year brought about the biggest crisis for the show.

While the show was expected to fold in February 2017, the addition of new members Jeon So-min and Yang Se-chan in 2017 helped revive it.

Comedian Yoo Jae-suk, one of the original cast members, has been credited with bringing out the best in everyone and keeping the show going. Yoo’s efforts paid off, and he won the grand prize at the SBS Entertainment Awards in December. He won the same prize in 2012 and 2011, also for “Running Man.”

Viewers appreciate the timely and creative selection of guests on “Running Man.” From actors to athletes, from rookies to big names, “Running Man” balanced the chemistry between its regular members and guests, sometimes scouting popular guests as regulars, as in the case of Jeon and Yang. According to SBS, the viewership ratings hit their peak on June 3, 2012, when soccer star Park Ji-sung and singer-actor IU appeared on the show.

To mark its 10th anniversary, “Running Man” hosted its first live show with all eight regular members on Sunday.