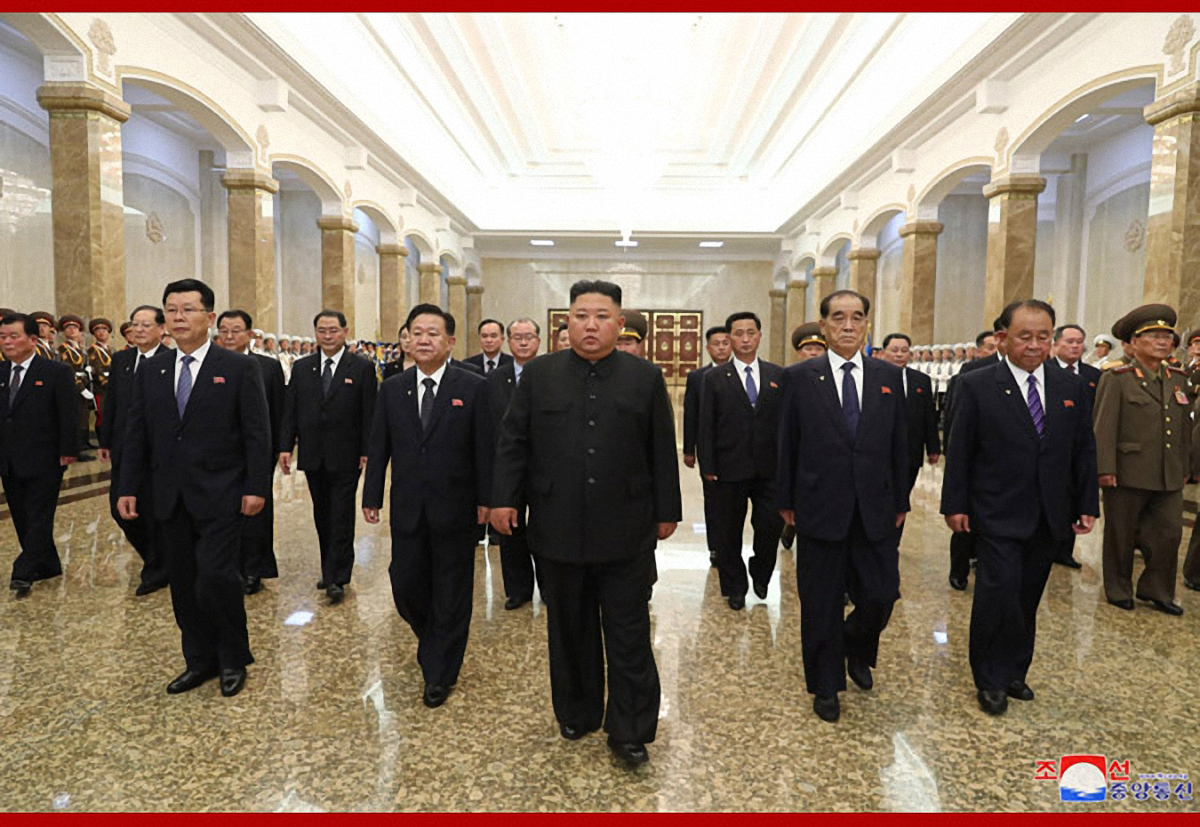 North Korean leader Kim Jong-un visits the Kumsusan Palace of the Sun to pay tribute to Kim Il-Sung to mark the death of the founder of the state on July 8, 2020. (KCNA-Yonhap)
North Korea appears to be weighing the timing to test a submarine-launched ballistic missile as part of the aggression it threatened to stage last month, a Defense Ministry think tank said Wednesday.

“With an SLBM launch, Pyongyang could deliver strongest shockwaves it intends to the international community, while shunning the risk of being seen as defying the UN Security Council resolutions,” the Korea Institute for Defense Analyses said in a report.

The resolutions denouncing the North’s weapons of mass destruction program so far have not specifically touched on SLBMs, it explained.

The North would rely on a method attractive enough to lure the attention of the US to the stalled nuclear talks but would be careful not to go about stretching that method to the extreme to abort the talks altogether, according to the think tank.

The think tank said the North could put off provocation until after the US election in November if the US-China feud does not grow into a full-on collision.

The North thinks the escalating rivalry serves its interest because a distracted Washington could not hit back at a provoking Pyongyang as forcefully as it would, the think tank added.

Another North Korean analyst, however, said Pyongyang would forge ahead with a missile launch before November’s election.

“Leader Kim would prefer sealing a nuclear deal with a bragging Trump than with his Democratic rival, since Democrats are pickier over decommissioning his nuclear arsenal,” said Park Won-gon, an international studies professor at Handong University.

A provocation would come measured so as not to hamper Trump’s reelection bid, Park added.

Park said Pyongyang would use an SLBM or satellite launch to earn sanctions relief from Washington, The US would find it increasingly harder to slam the North upon provocation since that opens the door to disputing the two years of progress that President Trump has touted so far.

Park advised the Moon administration to prepare to respond to a real military strike and not a show of force by Pyongyang, adding that he should make the joint defense readiness between Seoul and Washington clear and be ready to deploy strategic military assets upon provocation.

Meanwhile, the North’s state media KCNA reported Wednesday that leader Kim Jong-un had visited a mausoleum at Pyongyang’s Kumsusan Palace of the Sun to mark the anniversary of the death of his grandfather, the regime’s founding leader Kim Il-Sung.

The 36-year-old Kim sparked speculation over his health when he missed his grandfather’s birthday in April, which is marked with a major holiday there.

Kim was shown accompanied by his sister Kim Yo-jong and key party members, in a clear sign to discredit mushrooming speculation over his health.

State media and propaganda outlets in Pyongyang produced extensive coverage idolizing the young leader, without a message for either Seoul or Washington, whose point man on North Korea, US Deputy Secretary of State Stephen Biegun, is set to wrap up his three-day trip here Thursday.