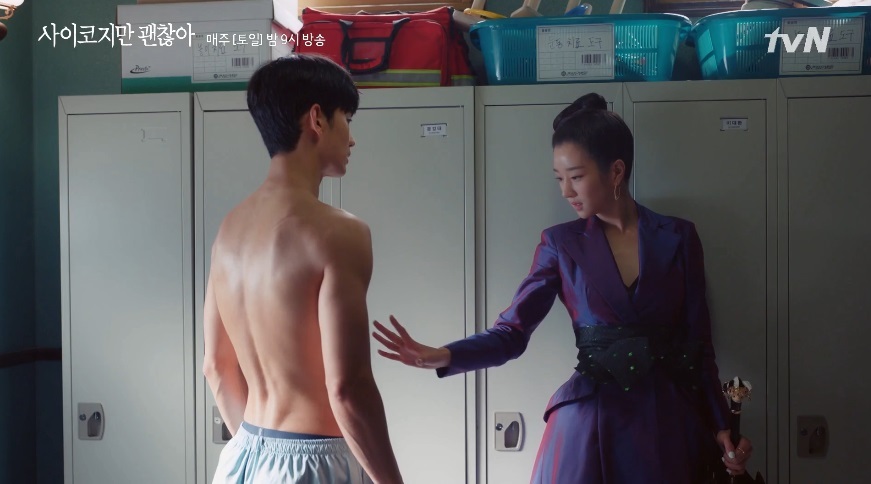 Scene from “It’s Okay to Not Be Okay” (tvN)
While the SBS drama series “Backstreet Rookie” has not responded to viewers’ complaints about its sexual objectification of women, the drama has been embroiled in yet more controversy, this time over the racist portrayal of a foreign character.

During the show’s fifth episode that aired Friday, a man who introduces himself as Nigerian encounters a Korean man with a similar dreadlocked hairstyle to his own in a convenience store and the two suddenly embrace each other as they “belong to the same Jamaican family.” Singing incomprehensible melodies, the two dance together to instrumental music.

The scene sparked a outrage from the drama’s foreign viewers.

Comments on social media included, “Tell me why this is on a popular K-drama in this day and age. As much as I love Ji Chang-wook, this drama has got to go” and “This is so stereotyping. They really think every African person is the same. I’m so disgusted by the fact this drama is made in 2020.”

The SBS drama, starring Kim You-jung and Ji Chang-wook, was in hot water even before its first episode aired because the web comic series it is based on had a lot of sexually suggestive scenes. The web comic of the same title contained sexual objectification of an underage female, as the story depicts a romance between an underage employee and a grown-up male manager of a convenience store.

In response to outcries of concern, the series’ director Lee Myung-woo explained that the series is a show that the whole family can watch together, “Only taking the positive energy of the two lead characters in the original comic.”

As the show hit the air, however, the series instantly received criticism from viewers due to several scenes, including one showing a high-school girl flirting with a grown-up man and kissing him on the lips and another portraying prostitution -- not depicted in the original web comic -- which is prohibited by law in Korea.

A few days after the first episode aired, more than 6,000 complaints were made on the webpage of the Korea Communication Standards Commission, some even calling for the show to be halted, while others took it to the broadcaster’s website and social media to lash out at the drama’s controversial scenes. 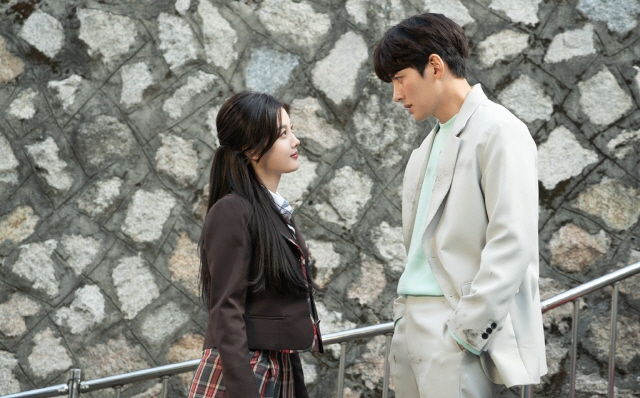 Scene from “Backstreet Rookie” (SBS)
According to the explanation made by an official from the KCSC on Wednesday, a subcommittee is expected to deliberate the episodes in relation to Article 27 (duties of integrity) and Article 51 (use of broadcasting language) of the body’s review regulation.

“It seems the producer believed he could sublimate such problematic elements of the original web comic -- whether it be the sexual or the discriminatory aspects -- through exaggerated black comedy, which was also shown in the producer’s previous series ‘The Fiery Priest,’” TV drama critic Yun Suk-jin told The Korea Herald.

“The thought that he could adapt the original content to drama overlooking such elements was a mistake.”

In the show’s third episode, which aired on June 27, the lead female character Mun-young, played by Seo Ye-ji, makes her way into the men’s dressing room and gazes overtly at Gang-tae, played by Kim, as he gets changed, touching his bare body against his will and making sexually offensive remarks to him.

Mun-young, who is depicted as having a personality disorder, continues to make judgmental comments about Gang-tae’s appearance, calling him “pretty,” and treating him like her possession.

The KCSC official added the deliberation on “It’s Okay to Not Be Okay” has not been decided yet.

Yun, also a professor of Korean literature at Chungnam University, explained the discordance between the TV producers and the younger viewers in their sensitivity to gender issues may be the fundamental reason behind the continuing controversies.

“The expression ‘gender-sensitivity’ itself is unfamiliar to many in our society, and although ideas about gender equality have been evolving fast recently, this is not portrayed in television drama productions. These idle attitudes (toward gender) held by producers, pushed by their battle for viewership ratings, ends up to the creation of such inappropriate scenes.”