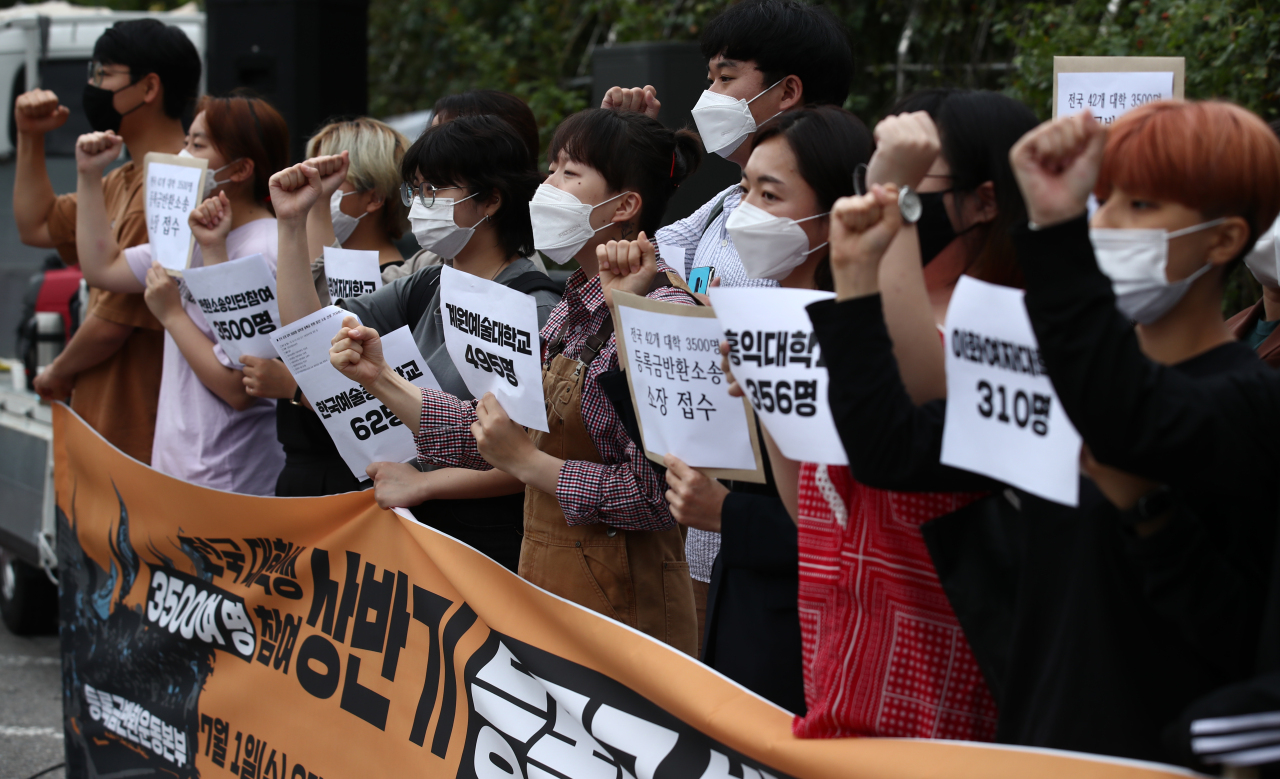 (Yonhap)
South Korean university students have joined together to file a class action lawsuit against the Ministry of Education and schools, seeking partial tuition refunds for disruptions to learning due to the COVID-19 pandemic.

The Movement for Tuition Refunds, a student group formed by the National University Student Council, held a press briefing on Wednesday in front of the Seoul Central District Court to call on universities to refund part of their spring tuition.

Some 3,500 students from 42 universities nationwide have participated in the class action lawsuit, according to the group.

The global crisis caused by the novel coronavirus has created a major disruption in the way the country's higher education institutions offer classes. As schools shut down and classes are being offered remotely, there have been continuing complaints from students that they are not getting what they paid for.

But most universities maintain that it is nearly impossible to cough up tuition, citing a rise in pandemic-related costs for setting up online classes and running disinfection and quarantine programs on campus.

"In the past five months, we have demanded the education ministry and schools refund tuition and solve the issue of infringement of education rights," the group said in a press briefing. "But schools avoided their responsibilities, citing lack of resources, and the ministry did the same, repeating that the issue should be solved between schools and students."

"Amid non-communication and disregard, we had no choice but to resort to a lawsuit," it said, demanding 1 million won be given to each private university student and 500,000 won to each public school student in tuition refund.

It also argued that the budget of 271 billion won earmarked for tuition refunds, which was passed in the education committee of the National Assembly last month, was simply not enough to cover the learning losses inflicted by pandemic-related campus shutdowns.

The student group conducted a survey on 11,000 students from 198 universities from June 24-28 and found that respondents believed that 59 percent of tuition, on average, should be returned to them.

On Tuesday, Konkuk University in Seoul became the country's first higher education institution to reach an agreement with the Student Council on an 8.3 percent cut in tuition for the fall semester.

The case is expected to send a shock wave through student communities and to be used as an example to further push for tuition cuts. (Yonhap)