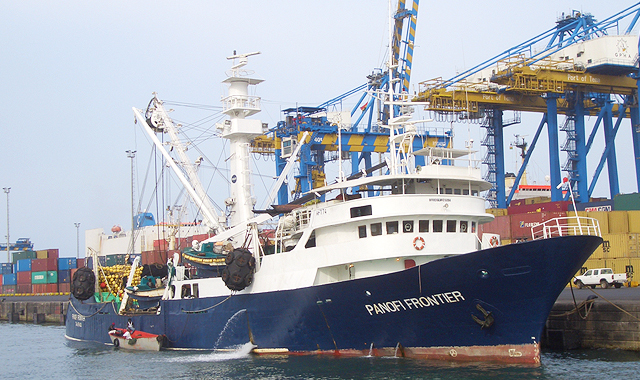 Panofi Frontier vessel (Yonhap)
Five South Korean sailors and a Ghanaian have been kidnapped by unidentified armed groups in waters off Benin in West Africa, the Foreign Ministry said Thursday.

Unknown gunmen, believed to be pirates, attacked the fishing vessel at about 3:40 p.m. Wednesday, Benin time, in waters 111 kilometers south of the country’s Contonou Port.

A total of 30 crew members were onboard the Ghanaian-flagged Panofi Frontier ship, but the kidnappers took off with only six people. The remaining 24 sailors, who are all Ghanaian, are returning to Ghana on the vessel.

As of press time, the identity and whereabouts of the kidnappers have not been identified. It was not immediately known whether the abductees remained unharmed.

Officials said they had set up an emergency response team, and were working with the authorities of relevant countries to secure the release of the Koreans as soon as possible.

The recent escalation of maritime piracy off the coast of West Africa, and primarily in the Gulf of Guinea, has raised great alarm. Though piracy has decreased worldwide, it continues to increase in areas around the Gulf of Guinea, which now accounts for 90 percent of maritime kidnappings in the world, according to the International Maritime Bureau.

The Gulf of Guinea, stretching from Angola to Senegal, is one of the most crucial shipping routes for oil exports and consumer goods to and from Central and West Africa. Several abductions of Korean sailors have been reported in the surrounding area.

A Korean national was released earlier this month, along with two Indonesians and three Senegalese, 37 days after the Korean was kidnapped by pirates off the coast of Gabon.

Three Korean sailors were abducted in seas off Ghana in March 2018. They were released after 32 days.